Theme: Phrases wherein the first or last few letters spell out a synonym for “group of friends.” These synonyms are separated from the main entry by a block and are all clued separately as [Group of friends]. A revealer serves as an added hint: 64a [With 65-Across, private dos, and a hint to this puzzle’s five theme answers] CREW / CUTS. 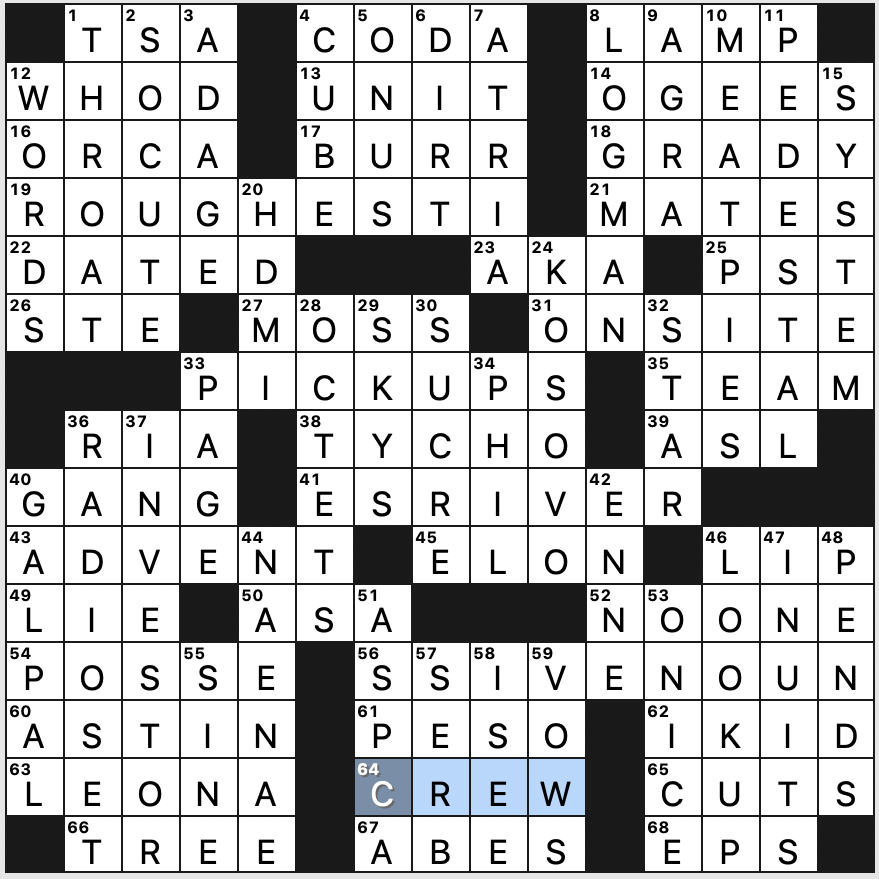 We see this theme type on occasion almost exclusively from editor Mike Shenk. This one has a little extra twist with the revealer. It’s well-executed with some nice wordplay and a truckload of theme material. I can’t say I get wowed by this type of theme, but this is well done (though not as impressive as this duo’s last team-up).

I’m liking MEAT PIES, KOSOVO, and RADIO SET in the fill though I had a challenging time with the latter since the clue [Ham need] had me thinking of meat (again) or actors. There’s a proper name crossing alert for the very center of the grid: TYCHO / SUCRE.

Clue of note: 1a. [Supplier of traveler’s checks]. TSA. Don’t think I’ve seen this one before. Cute. 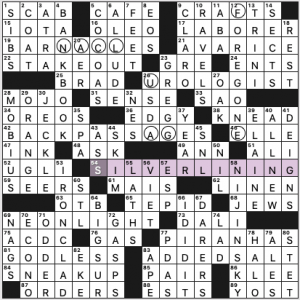 4.5 stars from me, though some of the fill (DARERS, OLEO) underwhelmed. The theme overcame those entries. 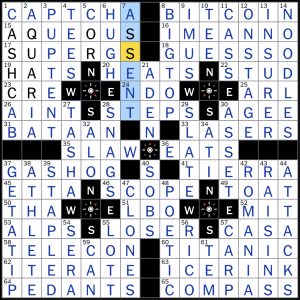 It was the unchecked letters in today’s NYT that clued me into what was going on it today’s puzzle.  We’ve got COMPASS in the lower right corner, clued with “Provider of directions…or a hint to the four ‘+’ shapes in this puzzle’s grid”.  Treating those each as N, S, E, or W (just like the unchecked letters in the center) makes the clues next to each compass make more sense:

I’m not thrilled with TEES and TEE[N] in the same grid, but I’ll allow it given the constraint and density of the theme.

Theme: Each themed answer includes a phrase where the S has been replaced by ZZ. 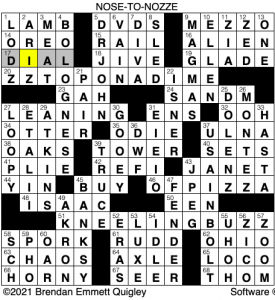 This was an interesting grid. I’ve never seen a puzzle with this many theme answers split up into two or three answers as in MEZZO HORNY and LEANING TOWER OF PIZZA (the latter of which was my favorite, by the way). I thought that the title made clear exactly what to look for, and it was a fun time to see what the phrases would be. I didn’t know what a KNEELING BUS was before today, but it turns out that I take them pretty regular since the buses in St. Louis typically don’t have stairs but just lower themselves.

Overall, a fun puzzle! It had a lot of names, many of which I had to catch on the crosses, but that’s also a reflection of my inability to remember celebrity names.

Editor: Erik Agard
Theme: Each theme answer ends with the name of a Powerpuff girl 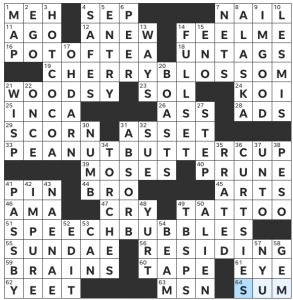 If you don’t know the names of the three Powerpuff girls, this is probably going to play like a themeless puzzle. From a fan perspective, I knew what this theme was going to be from the second I read the title. Even with that, it took me a while to parse Buttercup’s name into two words for PEANUT BUTTER CUP, and I kept trying to work in “thought bubbles” instead of SPEECH BUBBLES. I’ll blame these errors on solving the puzzle five minutes after waking up, though, because I really like all of the theme answers that Malaika chose.

This grid has one of the strangest black square patterns I’ve ever seen! I’m into it! One thing I love about solving the USA Today puzzle is that they are not afraid to take risks with grid design. As a solver and a constructor, this allows me to experience unconventional puzzles, and in turn think about why the conventions are there and if they matter to me personally or not. I don’t mind the extra black squares today at all, although I do kind of wish that the corners of the puzzle were more connected. But I also love HOT COCOA, LES MIS, and I’M GOOD as answers! 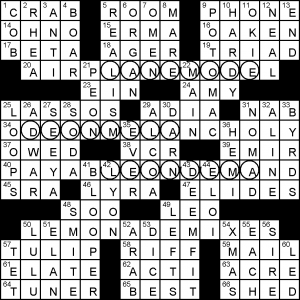 Roland Huget’s LA Times puzzle today is revealed at LEMONADEMIXES, a phrase I haven’t encountered, but assume is something American. There are three other entries with LEMONADE scrambled across their inners. Technically, that’s a long string to conceal three times, but this type of theme always feels less meaningful. Of the entries, ODEONMELANCHOLY is a great fifteen. 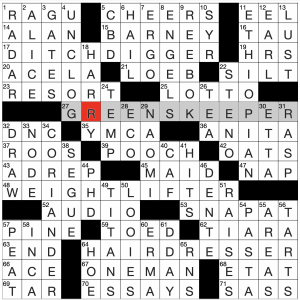 Not entirely sure I get the punniness of the theme here. Like, I know “coursework” would usually be school-related, so it’s wacky to think of it as a job for someone on a golf course, but I guess I don’t know what groundwork and brushwork are. I thought groundwork had to do with… I dunno… groundwork, I suppose. Never heard of “press work” I don’t think in any context.

Also, why do two of the clues start with “person” and two with the pronoun “one”? Is there any significance in that? Or is that a typo of sorts?

Aja NAOMI King. The term “GREENSKEEPER” isn’t one I was overly-familiar with either.

Fun puzzle to fly through. The good ‘ol ERMAs and LOEBs and LOOIES came out to play. Fill felt a bit dated, but definitely familiar, so speed solvers were likely off to the races. I got a little hung up on some of the proper nouns (ENGELS, NAOMI, HARRY crossing GREENSKEEPER when I was trying to enter some variation of GROUNDSKEEPER).

Not my cup of tea today, but that is likely due to my own ignorance in misunderstanding some of the theme terms.