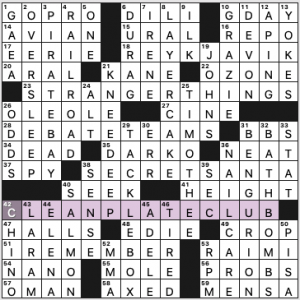 Late start tonight—was watching Shang-Chi and the Legend of the Ten Rings, which was quite enjoyable. Nice to have a slew of Asian leads in a big-budget American action movie for a change!

Lots of sparkle in this puzzle. GOPRO, REYKJAVIK, STRANGER THINGS, SECRET SANTA, the CLEAN PLATE CLUB (which was a thing my paternal grandmother was big on, hell for her grandkids who were picky eaters!), OVERSLEEP, LAYER CAKE, TACKLE BOX, TIMOTHEE Chalamet, and BATH BOMBS.

***This appears to be a debut for Brendan. Congratulations! And welcome!

THEME: Phrases that start with a word that means “end” 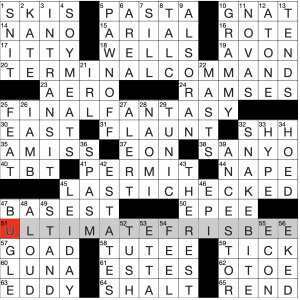 Four, solid colorful phrases with a nifty little tie-in to one another. I’m sorta surprised I haven’t seen ULTIMATE FRISBEE as a grid-spanner before. It’s so good!

Had trouble with PAWN OFF / WELLS. Didn’t know the latter Ida B. and for the life of me could not figure out a letter that would make sense in PA?N. Fairly solid “Oh duh.” moment once I dropped in the W.

Nice longer post answers doubled up next to one another: SNAKE BITE / ANCESTOR and IN TRANSIT / SOY MEATS.

First time seeing IRL in a puzzle I think. Don’t see a lot of TBTs either. They’re welcome in my grid, though I’m not sure how solvers who are not frequenting social media that often would feel about them.

Thanks for this one, Brendan! 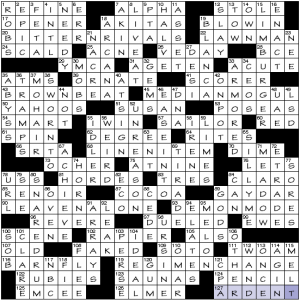 The letter N  (‘en’) is dropped into the center (‘core’) of each theme entry. N for November, per the NATO phonetic alphabet?

Consistently, they are all suffixed to the first word in a two-word phrase/compound word. 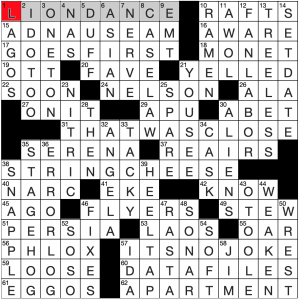 We have a collaboration today! I wonder who did what? I found this one not too thorny at all, which is a good thing since it has been a long week. I am quite familiar with C.C. Burnikel puzzles, but not as much with Andy Wang. But that didn’t seem to cause many snags during the solve. If they can continue to make puzzles like this, this collaboration should definitely continue! 4.5 stars from me.

That is all! I have a TON of puzzles to do today! 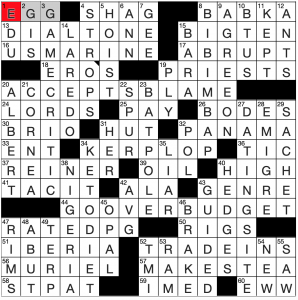 I got another decent time on a Matthew Sewell Stumper puzzle! I thought I would break 10 minutes on this one, but the SE corner slowed me down for a couple of minutes. There are a few quirky answers in that corner, but after the puzzle is solved, they seem a lot easier! Not too many long answers here either, so perhaps that helped as well. Maybe all of the Boswords tough puzzles are helping as well; I am clean so far in the Fall League! Kudos to Matthew for another Stumper gem. 4.5 stars from me. 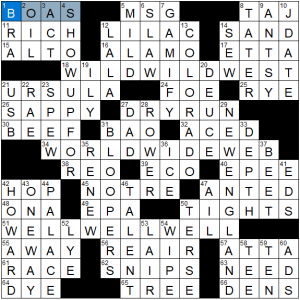 Theme: Three-word phrases in which each word begins with W-

A solid, accessible theme. I like to brainstorm other possible themers on easier puzzles: “what women want” and “wee willie winkie” come to mind.

Kind of interesting grid with each corner super closed off. But plenty of good stuff all the same: HOWARD University, Disney character URSULA, NEW ENGLAND, BLOOPERS.