At first, this puzzle played like a themeless to me, with lots of fun entries and modern cluing. But, as I got to the bottom of the puzzle, I was pleased to find a revealer: 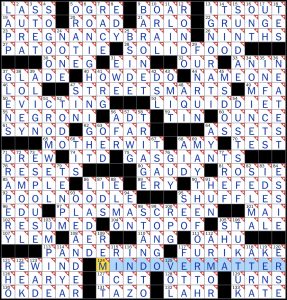 124A: MIND OVER MATTER [Slogan about willpower… or a hint to four pairs of answers in this puzzle]

Looking back through the grid, sure enough! There are four pairs of words meaning “mind” directly over phases of matter. Wow!

BRAIN over SOLID:
23A: PREGNANCY BRAIN [Forgetfulness experienced by soon-to-be-moms, informally] over
28A: SOLID FOOD [What a baby might start eating at around six months]

WIT over GAS:
65A: MOTHER WIT [Common sense] over
75A: GAS GIANTS [Jovian planets, by another name]

What a fun concept. I appreciated the motherdom / pregnancy / baby subtheme throughout many of the theme entries (and other longer entries like PATOOTIE and GO NIGHT NIGHT), and I was also quite pleased as a chemist that the phases of matter went in increasing order (as you heat most substances). All around, a really enjoyable solve, I thought!

Oh! And I almost forgot to mention – what a brilliant title for this puzzle (“Heads of State”) as a hint at both components of the theme. That’s next level. 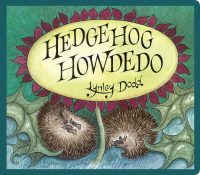 Other random notes:
– 40A: The spelling of HOWDEDO raised an eyebrow, though I guessed correctly at the E in the BARONET crossing. Hope that treated you okay, too!
– 4D: I viscerally appreciated the SO GOOD cluing of [Words moaned while eating a cheeseburger, maybe].
– 31D: Did you notice the italicized “She” in the [Sheep] clue for EWE? Nice touch!

There was so much to love about this puzzle and its cluing / entries.  I’d love to hear in the chat – what did you enjoy about this puzzle? Happy mid-November to all who are scraping by to get through to the holidays! :D

After some zaniness the past few weeks, the WaPo puzzle elevator has returned to the ground floor with a classic theme type.

THEME: Common two-word phrases where the second word is replaced with a homophone with IN added at the end. 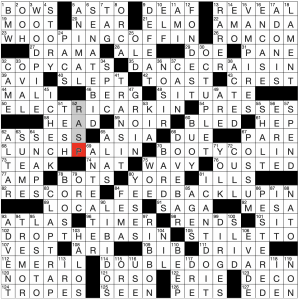 As soon as I uncovered the first themer and the theme revealed itself, I smiled. I knew instantly that this would be mostly a breeze. A light jaunt. A blue circle / green square trail after hitting up a few black diamonds.

I especially enjoyed the top half. Not only were my favorite of the themers up there, but some fun things to learn, like DEAF Awareness Month (it’s September btw). KIA‘s ownership exchange. And picturing ELMO in tap shoes as he sings “Happy Tappin’ With ELMO.”

As I moved south, I felt it got a bit more name heavy than I would’ve preferred, particularly in the theme, where five of them ended in proper nouns, two of which didn’t quite land as solid homophones for me, at least the way I pronounce them: COLIN / CALL and DARIN / DARE.

My two favorite names in the puzzle, however, are welcome anytime! That would be Tig NOTARO and her symmetrical opposite AMANDA Gorman.

Not too much else to say today! All in all, this was an enjoyable romp.

Theme: The initials for each person mentioned in the themed answers are “E.G.,” referring to the abbreviation e.g., which means “for example.” 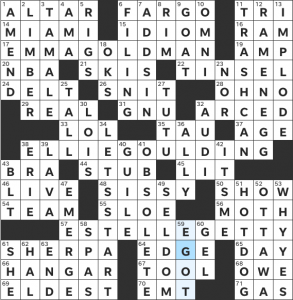 Once I finished the puzzle, I was focused on what about these particular women was meant as the “example” part of the clue, partially because of the cluing for EMMA GOLDMAN. Then, I focused on first names, but it hit me that all of their initials were “E.G.” Of the answers themselves, ELLIE GOULDING was the only one I got without having to totally rely on the crosses, but even though I wasn’t familiar with EMMA GOLDMAN or ESTELLE GETTY, it was fun to see women as the focus of these answers.

Grid-wise, it was fun to see 34d [“‘Time to begin!’”] LET’S START and, even more so, 41d [“Antiquated”] OBSOLETE. Both are clued easily, and I was especially excited to see OBSOLETE since it is a word I don’t expect to always see in a puzzle. These longer answers were also complimented by the upper right corner, with TRASH CAN and RAMEN EGG. However, this isn’t to say that we didn’t get some fun shorter answers as well. I thought that, the way the grid was built, ELLIE GOULDING interlocked nicely with words like ERIE, LAVA, LOIS, and many of the other shorter fills that crossed it.

Overall, a great example (get it?) of a Sunday puzzle!

Theme: AND is added to familiar phrases resulting in crossword wackiness. 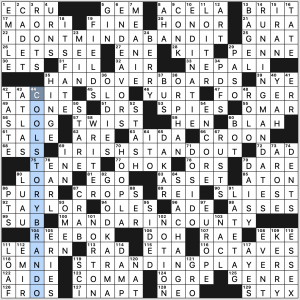 Solid add-a-word theme. I especially liked the more surprising, longish entries (Marin -> mandarin, stout -> standout) and the Brando one, for sure.

Speaking of standouts, GOOD KARMA is one among a slate of good fill entries such as SEA CHANGE, ENDEAVORS, LATE TAG, “LET’S SEE,” and “IT’S FATE” (although, “It must be fate” feels more common to me).

There’s definitely an international flavor peppered throughout the clues. I enjoyed these in particular:

THEME: Countries can be found backwards (or going up) in common phrases. 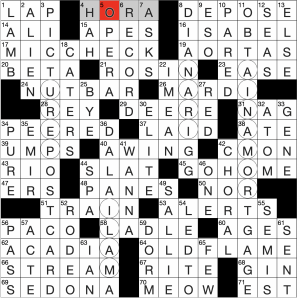 Well, I’d be lying if I said this was my favorite Paul Coulter puzzle. It isn’t by a long shot. The biggest problem for me not being the puzzle itself, but the fact that this is definitely a circle-dependent puzzle (read names in phrases backwards), and… ya’ know. Universal. Can’t publish circles. Loves circle-dependent themes. Go figure.

I’m actually just assuming the other published grids are circle-less other than the .puz version found here at this site. I can never find the 15x Universal on a Sunday other than here, which also strikes me as somewhat strange.

Thematically, it didn’t quite land for me either. We’ve seen a lot of find-the-word-going-up-in-common-phrases theme, but here the phrases strike me as a bit of a stretch. Like PICTURE POSTCARD.. Aren’t they just known as… POSTCARDs? And as wild as it is that ROMANIA can be found backwards in anything, it’s still in OBTAIN A MORTGAGE, which doesn’t strike me as an in-language phrase, despite the fact that I’ve indeed heard those words together many times. DIANA RIGG is a very new name for me. So DALAI LAMA was the one that worked best.

2.75 stars from me today with circles.