Theme: All theme answers are phrases in the form ” [verb] ME [person]” 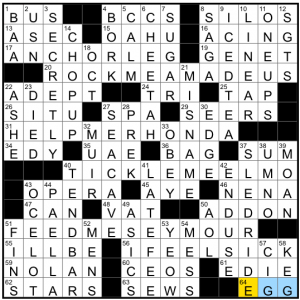 I’ve been hanging out with my family this weekend, which gives me a fun structure for this recap – my mom (in her words, “a regular but non-fanatical solver”) and I solved this puzzle separately and compared notes. Here’s my mom’s take: “Why is there no revealer? It needs something to tie it all together… actually, why is TICKLE ME ELMO there? That’s not a song! Everything else is a song!” I agree with her in regards to that second point – TICKLE ME ELMO feels like an outlier here (and I guess Elmo has red…. hair, but I would call it fur, really – I kept wanting it to be a Raggedy Ann answer). I personally don’t mind the lack of revealer, but it would be nice if the phrases had a bit more in common than just their structure if that structure is relatively common. As a musical theater kid, I did love the inclusion of FEED ME SEYMOUR.

Both my mom and I agreed that the fill here was good overall. We had different mistakes for SLED RIDE – she had “sledding” and I had, uh, “sleeps in”, and we both agreed the phrase itself feels a tiny bit off, but it’s still fun and evocative. Neither of us knew Jean GENET, but other than that the fill is solidly Monday level. I liked the misdirection on the 40d clue [Make the rounds?] for TEND BAR and the wide open NE and SW corners. I FEEL SICK and ANCHOR LEG are great across answer bonuses, which can be a rarity. My mom enjoyed how CIG and KEG were next to each other, which I hadn’t even noticed. I did notice, however, the double big cats (OCELOT and CHEETAH) and I enjoyed both the Falco and EDIE Falco references.  Overall, this was a fun and easy puzzle – congrats to Ian on his debut! 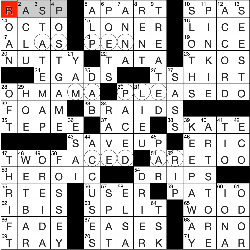 Apologies that I don’t have time this week to do much more than explain the theme here: 63A and 65A, clued together as [Chore on a winter to-do list … and what appears in each set of circles], are SPLIT WOOD. In each Across row in which they appear, the circled letters spell a type of tree that is “split” by a column of black squares:

I could’ve done with one more theme entry pair. The left side of the puzzle played harder than the right, to the point that I thought I was going to end up with a rather Wednesday/Thursdayish time until I got past the halfway point.

Theme: Phrases that contain the letters of WAGON, non-consecutively. These letters are circled, hence the revealer CIRCLE THE WAGONS (57a, [Get into a defensive position, and what we do in this grid]). 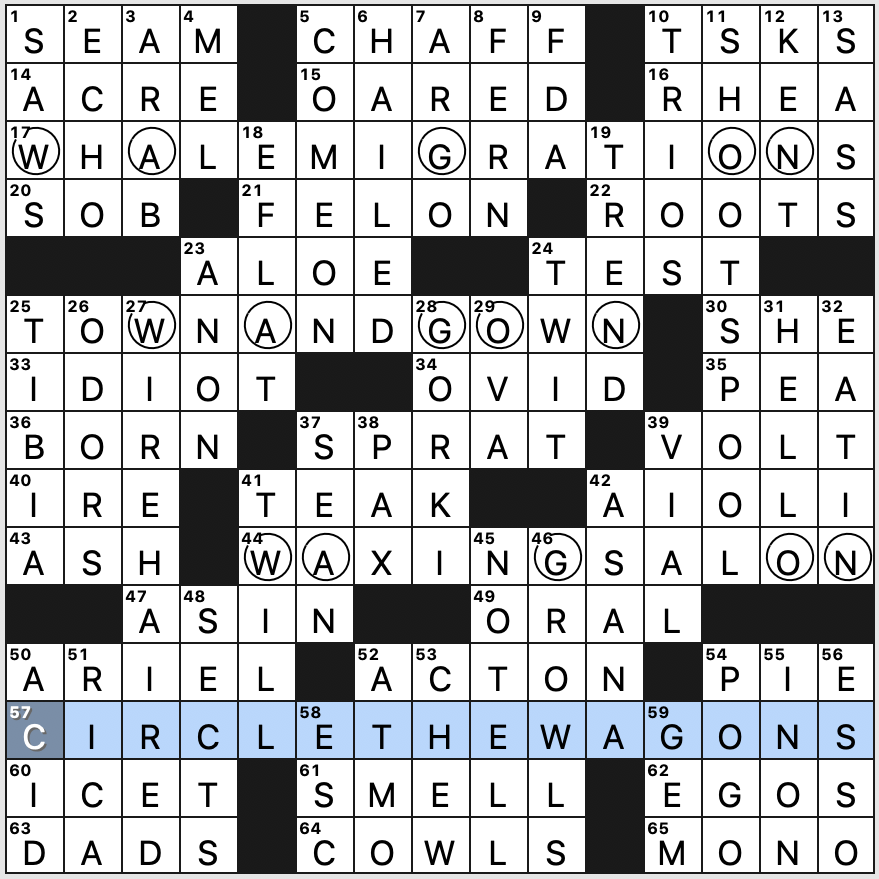 Catching on to the first wagon relatively quickly and seeing it take ship in the second entry made filling in the rest of the circles (and thus the theme entries) pretty quick. And that’s okay on a Monday. I don’t think I’ve ever heard the phrase WAXING SALON, but then I wouldn’t be the best judge of that, so I went with it. I still wasn’t sure how it was all going to be tied together, but the revealer did that nicely with an apt aha moment.

SHOOTS POOL and WIRE-HAIRED make for fine long Downs, and I also liked the frustrated “COME ON!” and the NO-TELL motel. 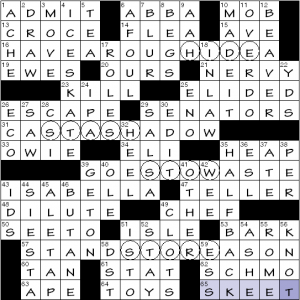 A different kind of meta puzzle. Hiding words are hidden in the theme answers. But they’re circled and easy to find. 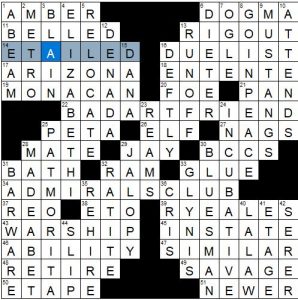 At first blush, I usually say I prefer these “four corners” style themeless grids to those that have 9- or 10-stacks in two corners.

I find more 6- and 7-letter entries give me more chances to really love an entry or three. But of course, it also means more chances to find something I don’t love, and I’m realizing the more BEQ grids I review that in general he’s looser with clues than I’d like. This puzzle has looked better the more time I spend on this review, but usually I don’t come back at all after the last square of course. 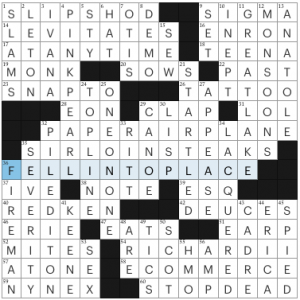 Look at this grid pattern—so much flow through the various sections of the puzzle. That might help explain why this one fell more swiftly than the typical Monday New Yorker crossword, which is supposed to be the hardest of the week. Everything just FELL INTO PLACE, I didn’t STOP DEAD anywhere. I did start out thinking 1a was SLAPDASH rather than SLIPSHOD, and don’t those two words make a great pair?

Theme: Two-word phrases whose initials (i.e., the first letter) are US 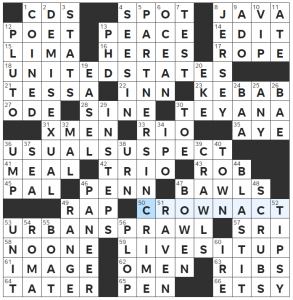 Short write-up today as my computer is on the brink of death and shuts off every hour or so!! That can’t be good but I don’t have time to deal with it right now!!!!!!!

This grid had asymmetry, even though it’s theme answers could have been placed symmetrically in the grid. I go back and forth on how I feel about asymmetry for no particular reason– some days I’m like “Why not!” (and I’ve constructed asymmetrical puzzles, both for my website and for the USA Today) and some days I miss the elegance of a symmetrical grid. Today I was more in the former category, probably because of the lovely bonus answers that we got– DEMISEXUAL (was just discussing this with my friend at dinner last night!), CROWN ACT (it was nice to drop that in with no crosses) and PARTNERS IN CRIME (fifteens-as-fill is so incredibly impressive to me).

Thanks, Brooke and Matthew for a fun puzzle :)