This week we’re looking for a five-letter word. The obvious (though not necessarily correct) interpretation of five w’s  is who, what, where, when, and why. The letter “w” is noticeably absent from both the grid and clues. There are four long grid entries (two horizontal and two vertical), each with two-word clues: 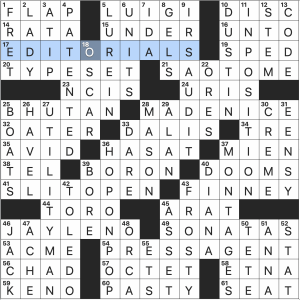 Those map to what, where, who, and who, respectively. The grid features lots of people (who), places (where), and things (what). Two clues feature years (when). I didn’t find much relating to why. I tried locating who-themed grid entries crossing where-themed entries (etc.), found plenty, but nothing seemed to form a pattern. A number of entries map to writing (another “w’) and movies. I pondered alternative interpretations of five w’s, and nothing clicked.

And… that’s all I’ve got. Joe Ross called this one a Simple and Difficult (SAD) meta, so I’m guessing it uses a straightforward (but perhaps unusual) mechanism. I submitted STORY as my Hail Mary guess. Solvers: please let me know what I missed in the comments. We’ll end with Lost Again by the Dance Hall Crashers.