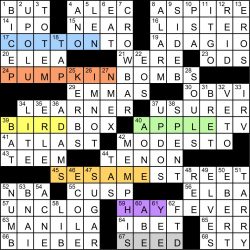 Hello there, everyone! Hope all is well as we’re speeding toward the holiday season.

We have a whole lot of things being planted in today’s garden of a grid, with the first six theme entries all multiple-word answers in which the first word is also a type of seed. Of course, SEED appears at the bottom of the grid as the reveal, as it looks as if each of those theme entries are growing from that seed at the bottom. (Not the case, but having the seed at the foot of the grid is a nice visual touch.)

“Cotton to” was a phrase I was not familiar with, and that fact made UPOLU even harder to unearth (2D: [Island in Western Samoa]). The theme made those two aforementioned entries a little easier to figure out, but that area was where I had the biggest hang-up, for sure. I knew that Listerine was named in honor of Joseph LISTER, but I probably had not thought about that for years until coming across the clue today, so that was fun to jog the memory in that fashion (16A: [Pioneer of antiseptic surgery]). Almost wanted to dedicate the next section to MODESTO, given that I almost took a job as a radio broadcaster in the California League, and would have gone to Modesto a few times to see their team, the Modesto Nuts (42A: [City in central California]). The team’s logo includes an anthropomorphic almond named Al and an anthropomorphic walnut named Wally. Man, I would have loved to have seen those mascots in person!

“Sports will make you smarter” moment of the day: MEMPHIS (42D: [Home of Graceland]) – Not talking about Elvis, but I am talking about one of the better soccer players in the world who leaves opponents all shook up. Dutchman Memphis Depay currently plays as a forward for one of the biggest soccer clubs in the world, FC Barcelona, and joined the Catalan club after a successful four-year stint a French side Olympique Lyonnais (Lyon). where he scored 63 goals in 139 appearances. In international play, Memphis has scored 37 times for the Netherlands (including two times in a World Cup qualifying match this past Saturday), the fourth-most goals of any Dutch player in the storied history of their national team. And yes, his first name is Memphis. Need proof? 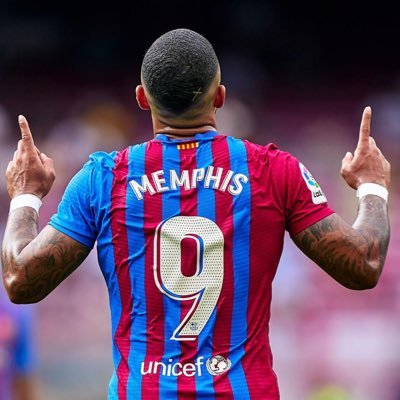 If I ever wore a sports uniform/jersey again, I’d totally have my first name on the back as well, bucking the usual trend of the surname appearing.

At first this just seemed to be phrases whose first word is also a military rank. But the theme is tighter than that. The revealer is MEDICAL CORPS (48a, [Army branch staffed by doctors, who might staff 19-, 25- and 42-Across]), and it clued me in to the fact that the theme phrases are all medically-related. 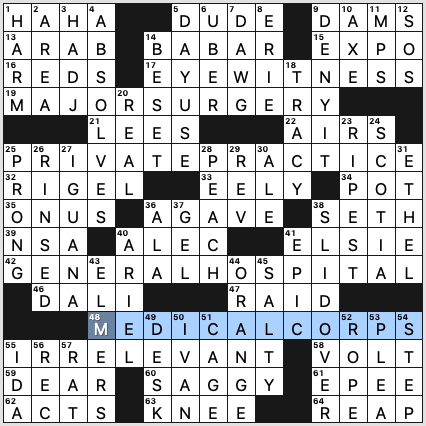 It just so happens that my wife works for the MEDICAL CORPS (as a civilian), so I really enjoyed uncovering the revealer. I’m not so sure about its cluing where it says “who might staff…” Is it saying Army docs might staff a PRIVATE PRACTICE, for example? Or might an Army private staff a practice? Neither of those makes sense. I’m thinking that revealer clue needs a little more massaging, but I get the gist of the theme: medically-related terms whose first word is also an Army rank. Nice, tight theme.

The fill is clean, though not especially sparkly with ABSOLVES and SLID OVER as the marquee Downs. We have EYEWITNESS and IRRELEVANT in the Across direction but their lengths (and the lack of asterisks in the theme answers) makes the solver wonder if they’re not theme answers as well.

Not so sure about “DENY IT” [Scandal advice from a handler, perhaps] as an in-the-language phrase. I’d be okay with “DENY EVERYTHING” though. 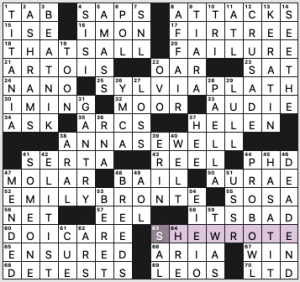 I appreciate a literature theme from time to time. I’m not convinced that the revealer phrase and clue spell the theme out with perfect clarity, though. Easier for English majors?

The central 10 in this 16×15 grid pushes the constructor to have those 10 stacked 7-letter Downs in each corner, and then there are six Across 7s as well. Not your typical Tuesday grid! Fave fill: Stella ARTOIS, AUDIE Cornish, BEATNIK, PRO BOWL.

Matt Jones’s Jonesin’ Crossword, “A Lot of Back and Forth” – Derek’s write-up 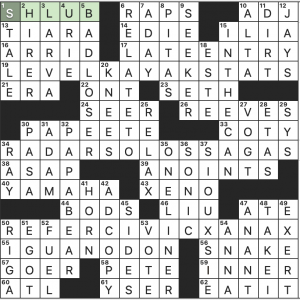 How are you with palindromes? Because there are a lot of 5-letter ones in this puzzle!

Well done! There probably aren’t that many more 5-letter palindromes, so to get this many to work is nice work. There are probably more than I think, but these are all extremely common words, which is what you want! Smooth solve on this one. 4.6 stars from me.

Another Jonesin’ coming next week! Here is a song that I CAN post! 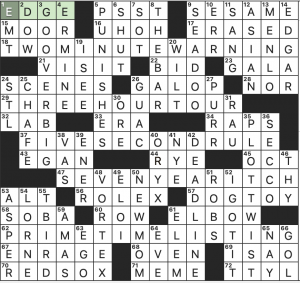 This is yet ANOTHER byline I am not familiar with, showing that the puzzle renaissance is alive and well! A nice tight theme in this puzzle:

Yes, there are FIVE theme entries in here, and they are all in the correct order from smallest to largest prime numbers. VERY nicely done! And to do all this and make a fairly straightforward puzzle is also nice; easier puzzles tend to be harder to make. Kudos to Sam! 4.6 stars from me.

What a fun puzzle! Today’s theme includes a revealer, of sorts, that ties it all together. The grid is also unique with partial symmetry, which I really enjoyed. 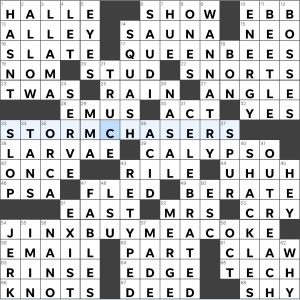 Theme: HALLE in 1a. plays the characters whose names begin each of the three themers

Great to see 1a. HALLE setting up the themers for the puzzle, giving the solver a clue right from the start and paired with the title “Character Study” should be enough to be primed for the theme. However, while I enjoy Halle Berry, I don’t keep up with movies well enough to know much movie trivia, let alone all of her roles so I didn’t have much help from those sources of innate knowledge that others might. QUEENBEES and STORMCHASERS were easy clues for me, while I got stuck on JINXBUYMEACOKE. Of the three roles, I only recognized Storm from the X-Men series, though based on length I figured Queen was another and Jinx was the third. Other roles came to mind while solving so I pulled up her IMDB page and she has some upcoming films as well for 2022. Also, check out Sally’s Take on this puzzle for further info on the Halle Berry movies and additional insight from her.

Favorite fill: TWAS, STORMCHASERS (made me think of the movie “Twister” too), CALYPSO, and HALLE

The entire southeast corner gave me the most trouble today. As my jinxes never went passed “Jinx!”, I stumbled until the end with the final themer’s first word and for whatever reason, none of the crosses were coming to my either. I finally broke into that corner with EXIST then NANO, making my way backward with IMIN and finally JERK to fill in the complete JINXBUYMEACOKE. Even with this tough corner for me, this puzzle is fantastic and especially enjoyed the grid layout. Great entries and clues as well! Excellent job, Erik!

THEME: Noodles can be found in theme rows if you combine the end of one with the beginning of the same row. 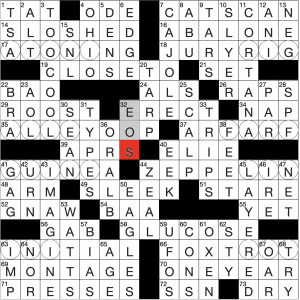 Great idea here in a puzzle that is packed with themers despite not feeling that way. And oddly enough, this puzzle is 82 words (way over typical limit), yet it felt like less to me, probably due to the longer answers in the four corners.

Fun clues for ELIE [Name hidden in “loveliest”]. ELI is more noticeable to me, and I don’t know any ELIE‘s, but I like the “find the name in this word” Universal clues. No clue what CORTANA is. Is it Samsung based?

So an excellent debut that would be 4+ star worthy were it not for… the circle issue.

I have difficulty getting past Universal’s penchant for employing circles and including them for solvers here at this site when they are unable to publish them for the masses. The fact that they are willing to create a whole separate puzzle file that includes circles is a less-than-tacit acknowledgment that their widely-published is lacking. Had I not witnessed first-hand many new solvers completely misinterpret the awkward instructions like [Dance in the NATO phonetic alphabet (… last 3 letters + the previous answer’s first 3)], then fine.

But it’s sort of like watching someone who is lactose intolerant go to a milk bar and just do shot after shot of 2%. They’re that addicted, and they don’t care about the result, even though it’s a mess.

That’s what Universal reminds me of when it comes to circles. They love publishing themes that require circles. Yet are unable to produce them. It feels like all of the other major publications have made vast improvements to their online solve experiences as of late, and Universal, the self proclaimed “…standard for the daily crossword’ watches from afar.

Sorry, D. L. (see INITIAL clue) Awesome debut. Too bad it was published incorrectly to the masses. Another victim of the “workaround.”