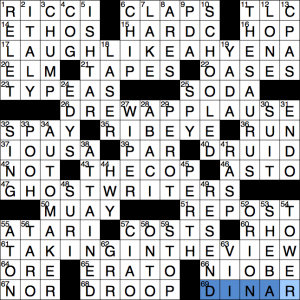 hello and welcome to episode #702 of matt gaffney’s weekly crossword contest, “Hooray!”. it’s week 2, but matt has offered this one as a week 1-level challenge with many different bells and whistles, so i tried this downs-only and without the instructions. what are the theme answers? i can only guess that they’re the four long answers in the grid: LAUGH LIKE A HYENA, DREW APPLAUSE, GHOST WRITERS, and TAKING IN THE VIEW.

now, should i be able to get the meta from just these? maybe. and i tried! i thought about the tv show called THE VIEW, and the broadway musical called APPLAUSE (since it seemed most closely related to the title), and i figured maybe LAUGH was also the relevant part of the first theme answer for the same reason. not all of this was completely off-track, but it didn’t get me anywhere. i definitely thought maybe the relevant parts of the theme answers would all be at the beginning or all at the end. but that wasn’t the case.

eventually i gave up and peeked at the across clues. that made the answer pretty evident:

well, it’s whoopi goldberg, who won a daytime emmy for THE VIEW, and a best supporting actress oscar for GHOST, and i guess was also in boys on the side and the lion king? i definitely did not know the first of those (i’ve heard of the film, but could have told you nothing about it other than it’s a drew barrymore film) and i had forgotten the latter. i’ve actually never seen the 1994 lion king, and whoopi isn’t in the 2019 remake. so it was always going to be an uphill struggle for me to get this one without the across clues or meta instructions. i probably could have done it with the instructions but no across clues, since knowing i was looking for a celebrity would have made GHOST and THE VIEW more prominent, and the title is enough of a confirmation for whoopi’s (first) name that i could have been pretty confident even without knowing exactly what to do with LAUGH LIKE A HYENA or DREW APPLAUSE.

i discovered this morning while submitting that the instructions for the puzzle were: This week’s contest answer is a celebrity with whom I share a birthday (November 13th). happy birthday, whoopi, and happy birthday, matt. i know matt has a trophy case jam-packed with orcas, but he’s long overdue to complete his EGOT.

that’s all i’ve got, but i’d love to hear from the rest of you which version you tackled and how you fared!