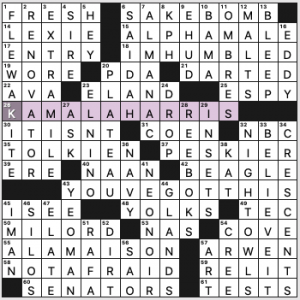 Hello! Moving right along to my fave fill in this 70-worder, because it’s late and I should hit the sack because I was up till 4:15 am last night (blame the moon): SAKE BOMB, KAMALA HARRIS (who officially held presidential powers for however long Biden was sedated for his colonoscopy), TOLKIEN (fresh-to-me clue: 35a. [Author who referred to his works as a “legendarium”]), “YOU’VE GOT THIS” (I’m happy to drop the ’ve), A LA MAISON, the EXTRA MILE, REEBOKS, OMBRES, NIGHT OWLS (hello!).

3.9 stars from me. Happy Saturday! 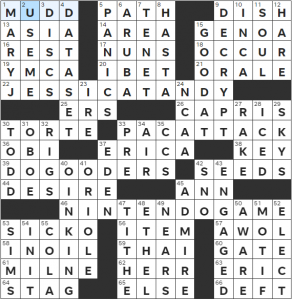 Short review today as I’m about to herd dogs into the car for an 11-hour drive.

I didn’t see the theme until a post-solve consult of the title: each themer has “CAT” or “DOG” hidden inside it, bridging a word boundary.

I wish the title were “Needing a Raise,” because in order to understand the theme, the raise has not yet been given.

THEME: The word FACE has been removed from four entries, and can be found underneath the four black squares where it should be. 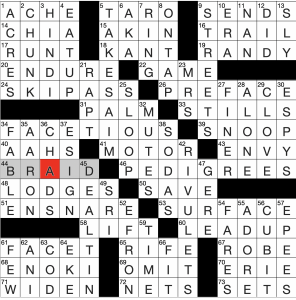 Outstanding idea and very well pulled off. Really, my only nit being the title. Just as the revealer’s clue is carefully worded (otherwise it looks like FACE has been dropped from the answers… the opposite of a FACELIFT), the title should be too (that’s what led me to believe FACE was being dropped, since the other parts looked like they had gotten a “Raise” already). FACE needs a LIFT.

Puzzle is well-filled (with fairly standard fill). No easy task since there are more theme entries than it may seem, so a lot of strain on the grid.

NAN Goldin. And… what are CHADS? Oh yeah. I vaguely recall hearing about them. 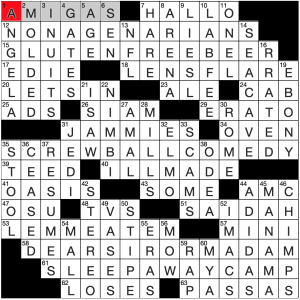 I am beginning to sound like a broken record, but I am seeing another byline that I don’t recognize. One that is already in the constructor database on this blog, as well! But a great puzzle by David, albeit not too difficult. A 5-minute time for one of these Saturday LAT puzzles is great for me; I think my record is probably just a shade under 5 minutes. (There is no way I would crack 4; I cannot read or type that fast!) If we ever get back to in-person tournaments, add this name to the long list of people I would like to meet that I haven’t already! 4.4 stars from me.

Only two more college football Saturdays are left! Off to enjoy the penultimate one! 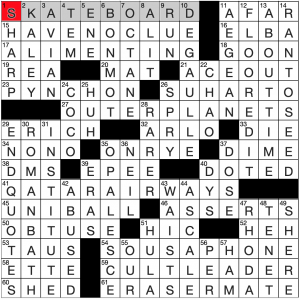 Not too bad of a time for me; also not great. Just over 15 minutes, but I wasn’t necessarily speed-solving this one. Got “stumped” by quite a few things in this puzzle, had a few things wrong, but in the end a clean solve. No error marks! Speaking of clean solving, if I can navigate one more Boswords themeless on Monday, that will give me a clean set of entries, which I don’t think I have done before. But a great Stumper here, as usual, from Stan. 4.5 stars. 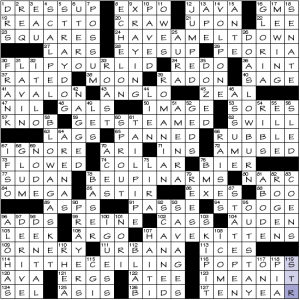