Big news on the AV Club Crossword front! There’s a Kickstarter for expanding AVCX from one weekly (usually themed) crossword to variety pack of puzzles each week: one additional regular crossword (with an emphasis on themeless puzzles), one cryptic crossword, one or two midi crosswords (between 9×9 and 11×11), and a trivia game each weekend. The added puzzles and games come from a terrific roster of puzzlemakers, and I’m looking forward to seeing their creativity every week!—Amy

Theme: Words and phrases that are synonyms of [Really happy], which is the shared clue for each theme entry. 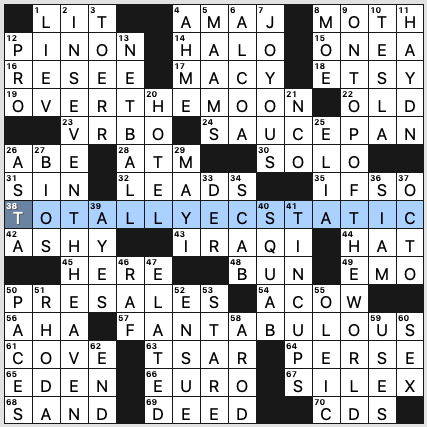 The story here is theme density and the fact that the two vertical grid-spanning entries (the best of the lot) are each crossing two other entries. Very impressive. I can’t say I’m totally sold on TOTALLY ECSTATIC as an in-the-language phrase or that anyone actually uses FANTABULOUS to mean “really happy,” but as a feat of construction, I’m impressed.

I could, however, do without the shorter entries JOYOUS and ELATED. All the other entries are slangy or idiomatic. These two are just regular words that only serve to diffuse the theme. In my opinion, it would be better to ditch those and help loosen up the grid.

With so much theme, there’s little room for long fill, but somehow a couple of interesting 8s (SAUCEPAN, PRE-SALES) and 7s (NETBALL, TIN CUPS) sneak their way in. I did notice more than the usual amount of fustiness in things like RESEE, “AH, ME“, MAAMS, ASTA, ELIA, A COW, and OLEIC. 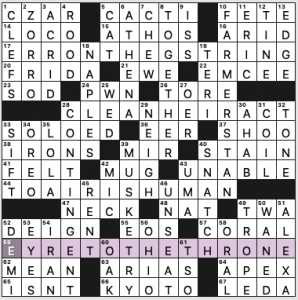 Homophone theme today, featuring words that sound like “air” being swapped with their sound-alikes:

This grid’s got over 20 proper nouns. If you hate being expected to know names, did this puzzle make you a little cranky?

15a. [Literary partner of Porthos and Aramis], ATHOS, referring to the Three Musketeers. This salvages the antiqued entry MUSKETRY, clued as 39d. [Skill never performed by 15-Across, oddly enough].

I’m not seeing anything else in the puzzle that prompts me to add it to my post, so I’ll sign off here.

Editor: Erik Agard
Theme: The final word of each theme answer is an anagram of TENS 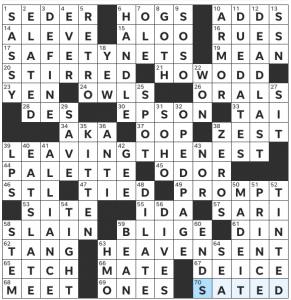 Solid theme that’s well described by the title today, which is always what I’m looking for from USA Today. It took me much longer to get HEAVEN SENT than the other theme entries, and I’m not sure why – I’ll blame it on thinking that 48d [Become wider] was about, like, a chasm, which made it hard to see DILATE, and I didn’t know Quan Hongchan so I had to get DIVES entirely on crosses. (Actually, I had DI_ES for a while and though “gosh, I hope not”). Quan Hongchan won gold at the Olympics in diving this year and is 14 years old, how wild is that??

Fun fill today in the form of DEAD LAST and DUE DATES (the latter of which I enjoyed the obstetrician-related clue for). I found the southeast corner of the puzzle to be the hardest – I had “demon” before SLAIN for 58a [Dispatched by Buffy] and “seed” instead of STEM for 58d[Sunflower part], which made all the answers hard to get! I did not know that the Chinese word for sugar is TANG, but I’ll be sure to remember it from now on. And it was great to see Jewish representation at 1a for SEDER, even if it’s the wrong holiday for the current season :) Happy Hanukkah to all celebrating! 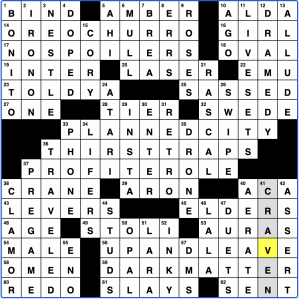 First off: The AVCX has a Kickstarter right now for an AVCXpansion with a second weekly puzzle, midi, cryptic, and more.  Find out more details and contribute if interested here!

Now, it’s a themeless week.  Ella Dershowitz has given us a visually lovely grid, so let’s see what’s inside:

There’s lots of other great stuff, but I leave it there for now.  Happy Wednesday! 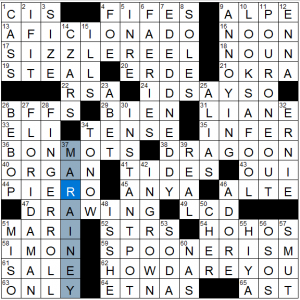 Dropping the grid in now, and will have to come back later in the morning for a more complete review. See you later! 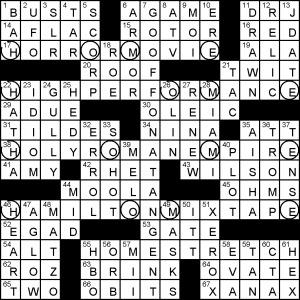 Joe Deeney’s theme today is fairly basic in concept: HOMESTRETCH is the revealer and four entries have those letters but not adjacent to each other. What is ambitious is having three 15’s and 11’s as theme entries. Two of the four – HAMILTONMIXTAPE and HOLYROMANEMPIRE – are definitely top drawer entries; the other two, HORRORMOVIE and HIGHPERFORMANCE are solid, if more generic, choices.

Another unusual feature is having a single 15 down in the middle unrelated to the theme the meta GOOFFONATANGENT. It’s an odd choice for sure.