The theme is VOICE OVER ARTST (64a, [Animated film specialist, or what can be found literally three times in this puzzle]. The long theme answers hide famous artists, and directly above them are different voice types (not clued as such). The title is the classic phrase spoken by a narrator at the start of many a movie trailer. 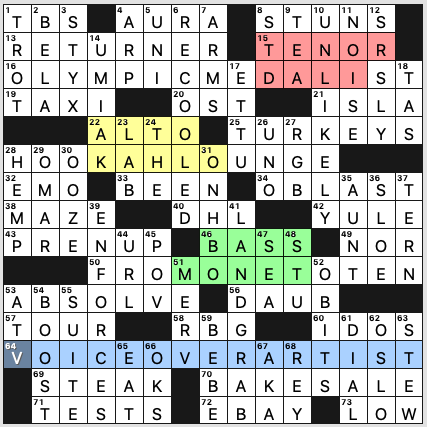 I uncovered the second long entry first and immediately saw KAHLO. What a great find! Going back to the first entry, I was expecting to find an artist spanning the two words, but couldn’t make it happen. Eventually I found DALI, but was disappointed the name was contained entirely within one of the words.

The reason for that of course is because of the placement of TENOR. Once I hit on the revealer I learned the full scope of the theme, I was somewhat mollified. However, I would have liked it better if the artist names and the voices they’re attached to were of the same length.

There’s some nice long fill here (a kick RETURNER, TURKEYS, LAND GRAB, and BAKE SALE). But there’s also some fustiness especially in the upper middle, because—guess what—that’s where you find a clutch of theme material. And so you have entries like the unlikely RECOOLED and the clunky ON HBO. Obviously there’s little wiggle room for the constructor in those areas, but as a solver, it’s still no fun to find these.

A large amount of theme material forced some constraints in the fill, but overall, the theme is nice. 3.5 stars. And oh, by the way, if you want to learn more about the fascinating work of voice-over artists, I highly recommend the documentary “I Know That Voice.” 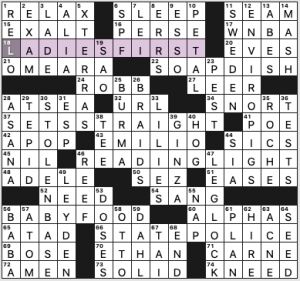 The constructor’s gathered a set of two-word phrases that form other legit phrases when the words are subject to “The Old Switcheroo.” The clues match up with the switched form of the phrases that fit into the grid:

I didn’t love hitting RELO LADE ALIA in the opening corner, but overall the fill was solid. Fave entry: The didn’t-know-it-till-this-puzzle ENVIRO-PIGS.

4.5 stars from me, mainly for the cool theme. 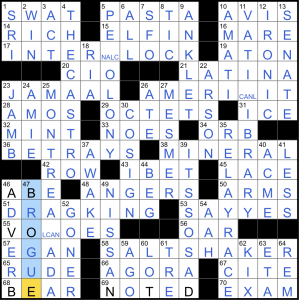 I had the revealer on today’s NYT before I had any of the theme entries, which helped figure out what was going on, so let’s start there:

“Shaker” feels anagram-y, so I figured we’d have some combos of either SALT or NACL (NaCl is the chemical formula for table salt) in the answers, and then it made sense that those might be rebus squares.  That proved correct:

There’s something very satisfying of knowing exactly what’s going on with a theme as you’re solving it, and that was true here as well.

Mendelssohn’s OCTET in E Flat Major, as clued by 29A

and that’s that – happy Thursday!

The byline today comes as no surprise at all. In *almost* the last three weeks, over 50% of the puzzles have had the same byline. I found it somewhat irksome at first. Now it’s rather enjoyable.

THEME: Two word phrases with repeated letters at the front and back of each of the words. 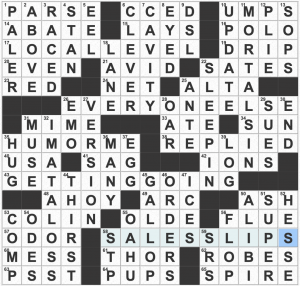 The repeated letters spell out LEGS.

Another one that’s just fine. The “hint” given in the first theme clue was a bit clunky to read, but I think in this case, circled letters would be too strong of a nudge, so I like the way it was presented.With the title and after uncovering the first themer, I was pretty certain the rest of the phrases would feature -E, then -G, then -S. So it was easy to plunk those in at the first and last positions, but not be entirely certain where they were on the inside. This created a synergy of sorts between the theme and the fill.

Nothing much else to say!

We’re all but certain to see the byline again in the (very) near future. 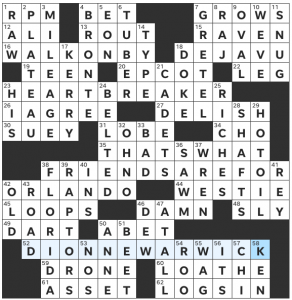 OK, I’ll admit it, the main ways I’m familiar with Dionne Warwick are 1) her incredible Twitter presence, 2) Ego Nwodim’s “The Dionne Warwick Show” SNL skits, and 3) her “Masked Singer” appearance, but I still enjoyed this puzzle! I couldn’t have told you any of these were Dionne Warwick songs (the only one of hers I immediately recognize is “Say a Little Prayer For You”), but if you check her “popular” section on Spotify, three of these songs – THAT’S WHAT FRIENDS ARE FOR, WALK ON BY, and HEARTBREAKER – are listed in the top five. So I bet if you are a big Dionne Warwick fan, this puzzle was super fun for you, but because Erik clued all the song titles in ways that didn’t involve specific Warwick knowledge, it was fun for people like me who know very little of her catalog. Now I’ve got to listen to some of these songs!

The black square placement today is super weird! I can honestly say I haven’t seen anything like this before. I did not love the design of the 3×5 block of answers in the southeast corner, but I understand having it there for two reasons – having some shorter, easier answers would help out solvers unfamiliar with Dionne, since they cross most of the back half of her name, and it’s also directly below two stacked theme answers, which can be notoriously tricky to work with. The grid felt pretty segmented to me, even though there is space for nice longer answers like RAPTORS. Also, there is a big section in the middle (the two THAT’S WHAT FRIENDS ARE FOR clues and then 42a [City in 38-Down] for ORLANDO) where everything is cross-referenced, which meant that on a first pass I had absolutely nothing in that area until I went on to the downs. Maybe the FLORIDA/ORLANDO clue pair could have been cross referenced the other way so that there wasn’t just a big stack of the same clue type?

Closing with the most embarrassing part of my solve today:

Me: *Gets to revealer clue, looks at cross-referenced answers, realizes the only one I have is DEJA VU* 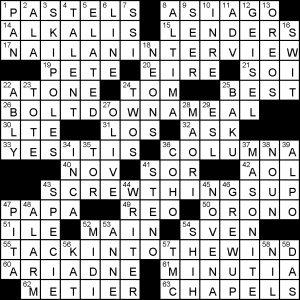 Coincidentally, I was listening to this song before solving Jeffrey Wechsler’s puzzle. The four long across phrases today start with a fastener of sorts. The phrasing felt stilted often today, I’m guessing the word lengths weren’t balancing well? Any we have NAILANINTERVIEW (NAILTHEINTERVIEW sounds much better), BOLTDOWNAMEAL (“a meal” is kind of an arbitrary addition). The final two, SCREWTHINGSUP and TACKINTOTHEWIND, sounded more natural.

Theme: Each themed answer includes the letters NFL in the center, referring, of course, to the National Football League. Go Bills. 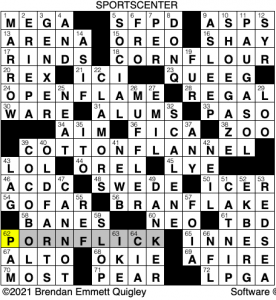 I appreciated this theme for its simplicity. Once I got OPEN FLAME, the rest of the NFL fell in line. I thought the combo of the clue for 39a and the next immediate Across answer was incredibly self-aware and funny, being that it was 43a [“‘ZOMG! BEQ just made a grunge reference!”] LOL. And, I mean, on its own, COTTON FLANNEL is such a fun answer.

That’s it from me today. A fun puzzle with a few obscure names but overall a nice brain-bending fill.