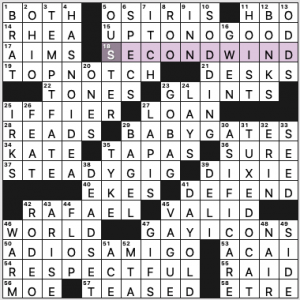 I’m late to the puzzle because I was watching Annie Live on NBC and it was delightful, especially Celina Smith (in the title role) and all the other girls playing orphans. Tap dancing! Harry Connick Jr. singing Warbucks! Cute show. Never actually saw the musical (stage or film) before. Anyway! I have not gotten a SECOND WIND (great entry!), I don’t think, because I experienced this more like a Saturday puzzle. Just me?

Fave fill: UP TO NO GOOD, TOP-NOTCH, BABY GATES, STEADY GIG, GAY ICONS, “ADIOS, AMIGO” (for the longest time, I thought this would be a phrase ending with the words I GO), TEMPT FATE, GO BAG, TUXEDO CAT.

Nancy Stark and Will Nediger’s Universal crossword, “Headed for the Top”—Jim P’s review

Theme: The revealer is BOTTOMS UP (34d, [Toast words … or 3-, 4- and 9-Down, based on their meanings and direction?]). The other theme answers are bottoms of things and they’re written from bottom to top. 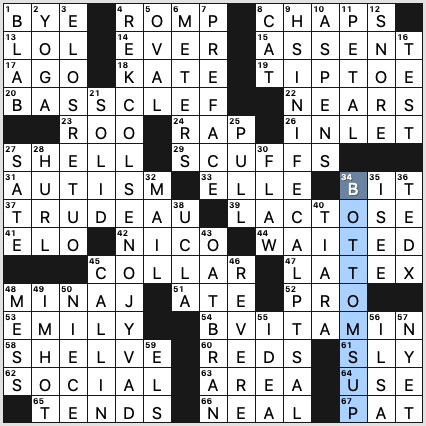 I admit to not fully grokking the theme even after finishing the grid. The fact that these things are bottoms of other things is a subtle feature that required some cogitating on my part. But once I had the aha moment, all was good. And the upward gimmick is a nice and apropos change of pace from the usual puzzle. 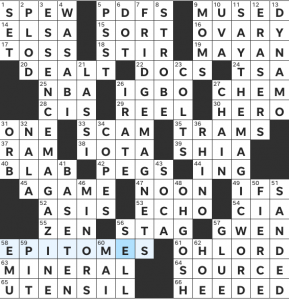 With two fifteen-letter answers and one thirteen, this is a mighty theme fill. Plus, I adore ESSENCE MAGAZINE and SAY THE MAGIC WORD equally, both because they are clued so well. Having grown up with a little sibling, “pleeeease” immediately triggers SAY THE MAGIC WORD so this was as natural as saying “IO” whenever someone says “OH” (you can guess where I’m from).

Grid-wise, I love this vertical wave in the middle leaving room for the three themers. I also thought it opened up the bottom left of the puzzle nicely for 58a [“Ideal examples”] EPITOMES, 63a [“Quartz, e.g.”] MINERAL, and 65a [“Sport or knife”] UTENSIL. While filling, I was full steam ahead on Across clues for the first half, right down until about 44a [“Verb ending found in this clue”] ING. Then, the Downs finished the grid for me. One of my favourite things about doing reviews here is that I make sure to go back through each clue, and I was like “oh, when did I fill in WASABI?” It’s hard sometimes to catch all of the words you get on the crosses when you’re full steam ahead in one direction or another.

OH LORD, do you think I’ve gone on long enough? Have a great weekend! 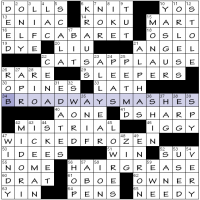 After seeing the first theme answer (16a) I thought it might be a seasonal thing, but it turned out not to be. 23d [Not seasonal] ALL-YEAR.

Cute theme. I think these are all musicals? Not sure about Applause.

Quick tour of the rest:

May Huang’s Inkubator crossword, “Off The Hook”—Sophia’s recap

Hi folks – Sophia here subbing for Rebecca on today’s Inkubator!
Theme: Each theme answer begins with a part of a fish 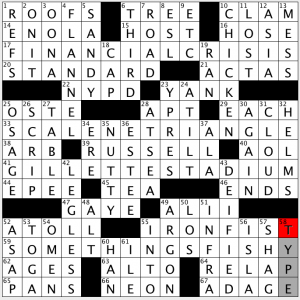 I loved today’s theme! Not only does the revealer nicely tie up the gimmick of the puzzle, it’s a fun phrase to boot. The fact that all of the theme answers are a grid-spanning 15 letters is a really elegant touch. It certainly didn’t hurt that I could drop in SCALENE TRIANGLE and GILLETTE STADIUM without any crosses either.

The fill is generally high quality; I like how there isn’t any particular area that feels overwhelmed by three letter answers. The OSTE/SCRIP/ARB section is a little rough (particularly OSTE; I really wanted an “O” on the end of that), but given that it runs through two theme answers there may not have any better options – looking at everything post-solve, I’m amazed how clean the center and center-right areas feel given the constraints. 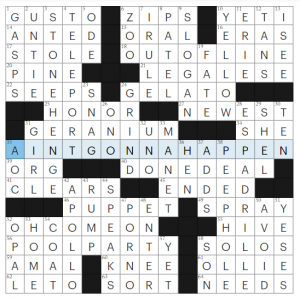 Good morning folks! Quick notes today because I have a zillion errands to run. Fave answers were TELEPORT, DONE DEAL, POOL PARTY, GELATO, PUPPET, AINT GONNA HAPPEN, and OH COME ON. This struck me as a sort of active, peppy puzzle, with stuff like GUSTO, ZIPS, references to snowboarding with OLLIE, and the daily GRIND + bees? Idk, just vibes I guess.

Great clue for STONEHENGE, [Famous rock group?] which I think wouldn’t have needed a question mark if this were a Monday. Didn’t love the clue for RUMP— Sit on it! I think exclamation mark clues work best when people actually do exclaim those words (like Book it! for “hotel room” maybe) and I don’t really think people go around yelling Sit on it!