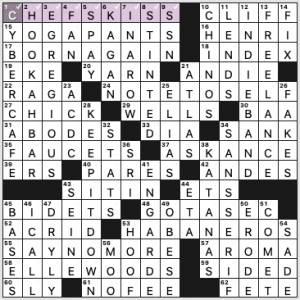 This crossword is *CHEF’S KISS*, really a well-written and interesting puzzle. Kinda gutsy to put the desired critical response right at 1-Across … and a hundred times better than a puzzle whose 1a is a crusty old entry.

I didn’t notice till I started blogging that the symmetry flips along the NW-to-SE diagonal rather than being traditional rotational.

Other fave fill: YOGA PANTS, BORN AGAIN clued as my husband’s name etymology, “NOTE TO SELF,” ASKANCE, “GOT A SEC?”, HABANEROS, “SAY NO MORE,” ELLE WOODS, HOOKAH BAR, EGREGIOUS, KEEP IT DOWN, INDIE BAND, and FREELANCE.

4.5 stars from me. Not too tough but not too easy, chock-full of interesting tidbits. 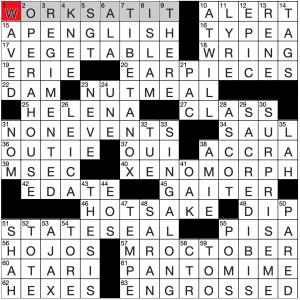 Frequent Stumper constructor Matthew Sewell has this week’s LAT Saturday challenge puzzle. This one is much easier than those! Nothing too difficult here, but still a fun solve. I smiled more than once for an entry or two! I may have laughed loudest at TIBETAN OX, since it reminded me of Will Shortz’s email address! Lots of fun with this one, which is welcome after a long week of work! A solid 4.6 stars for a tight puzzle from one of the better themeless constructors we have.

How about some notes?

Michigan has a big game today!! Suffice it to say I am a little excited! 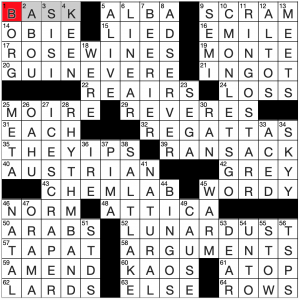 Got a quick start on this one in the NW corner, then made further progress in a few other areas. But I ground to a halt in the upper right and middle left spots, at least until a few key gets broke it open. No errors! I’ll take that as a win! An error-free solve on themeless puzzles is my goal anymore. I was clean on the Fall Boswords until the final puzzle, but that one didn’t count for me, as I was nowhere near winning anything! The “Les Ruff” puzzles are not proving that way for me recently! 4.5 stars from me. 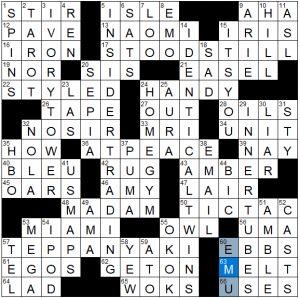 We’ve got themers in the down clues today from Brooke Husic, as suggested by the title “It’s Going Down”:

Easier to see here than in the grid, but “IT” (I and T) begins each of the theme phrases.

The fill was plenty colorful and varied, as well. I’ve learned a bunch about ASL (11d- Language with a Philly accent) from its frequent appearance in Brooke’s puzzles lately. Entries like TEPPANYAKI (once I got the spelling right), TICTAC, NAOMI Osaka, and HOME GYM were highlights for me.

THEME: Words that can follow “book”can be found at the ends of common phrases

I liked this one from Taylor Johnson today! And it’s nice to see a brand new byline in Universal. Colorful entries. DEMISEXUAL is a new term for me, juxtaposed with the old fahsioned CLAW FOOT BATHTUB.

Also, excellent pillar longer entries with GENIUS BAR, MERE MORTALS, and IT’S A CINCH! A little bit of misdirection in the clue for ON/OFF SWITCH gave that some color as well ([Something you flip in a house] has nothing to do with a realtor flipping houses)

My one nit would be that this is better served with circled letters at the beginnings/ends of themers. Without them, you definitely have to wait for the revealer. I’m the type of solver who likes to try to figure out the revealer without the revealer itself. Circles would’ve given it a little spice and helped to build anticipation imo. Otherwise, unless you solve from south to north and uncover the revealer first, it feels like a themeless.

Are book wrappers synonymous with book jackets? That would make the title make more sense. I’m not entirely sure there. 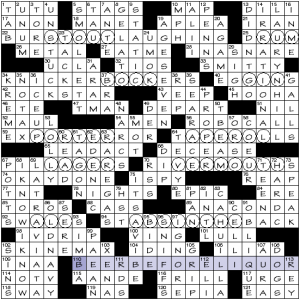 Circled letters of pairs of words in the same row.

I suppose ‘Tubthumping‘ might be a better choice here, but in my opinion it’s far from Chumbawamba’s best.

It’s quite a clever theme and I appreciate the spirit of it, despite a minor hiccup or two.