Remember March 2020 when the world seemed to shut down? How is it already December 2021, almost into 2022? Wow! Here’s hoping that you and yours are doing well, are staying safe, and have gotten vaccinated if you can. Let’s all keep doing our part to protect those in our communities who aren’t able to get vaccinated!

Today’s Sunday NYT comes from the teamwork of Chase Dittrich and Jeff Chen, whose theme entries can’t seem to say anything just once… 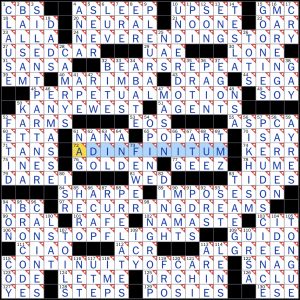 I liked this theme and, largely, how it was executed! Each theme entry phrase is reimagined as a descriptor of saying the same one word over and over and over again. My favorite executions of this idea were certainly AD INFINITUM and BEARS REPEATING. The syntax of the clue for NEVER ENDING STORY didn’t quite work for me, and that theme entry idea seemed too similar to NONSTOP FLIGHTS to have both in the puzzle. Even still, I liked how there was a wide variety of in-the-language phrases amongst the theme entries and that they didn’t just use the same phrasing format each time. (Side note: Is the grid shape of brackets made of black squares tied into the theme? Mathematicians and others – what do you think?)

Random thoughts:
43A: DRAG [What some kings and queens dress in] – I’m always excited to see LGBTQ+ representation in the NYT puzzle!
52A: FARMS [Click ___ (artificial increasers of website hits)] – I also enjoy seeing modern concepts as a way to freshly clue words like this.
74A crossing 59D: KERR [Steve with eight N.B.A. championship rings] crossing AYRES [Lew ___, portrayer of Dr. Kildare] was a toughie for me!
12D: SON [Family member inaptly found in “ladies only”] – The strictly and binarily gendered nature of this clue didn’t sit well with me. Many families have sons who are, in fact, ladies. Toss “inaptly” from the clue and let’s talk.
38D: GAY [Like some apparel, in song] – I will only accept this if it’s rainbow and fabulous. :)
58D: CARMEN [Sandiego not usually found in San Diego] – I loved this clue, though I’ll acknowledge it’s squarely in my wheelhouse / age demographic to know this!
94D: NON [Prefix with binary] – Yes, yes, yes. Nice clue! Though I laughed out loud at NON-binary being right next to BRO CODE.

How was this puzzle for you? What did you enjoy about it? Let us know in the comments section below. In the meantime, be well! 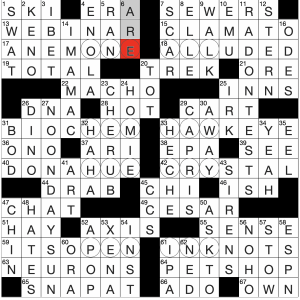 I typically like Paul’s puzzles. You can almost always count on clean fill and a clear consistent theme. Perfect fit for Universal (as evidenced by just how prolific he has been).

While I didn’t particularly care for this one, there is still a lot of impressive stuff here. Puzzles with this sort of theme are extremely difficult to fill. While it might seem as though there isn’t much more theme in comparison with other 15x puzzles, there are indeed 8 theme answers. Not 4. So impressive job with this.

My biggest nit, which is a constant complaint of mine and has nothing to do with the puzzle itself or its construction, is that this is a puzzle that is circle dependent. And Universal is unable to feature circles in its grids anywhere outside of downloading a .puz file from this site. I don’t think it’s unfair of me to assume that the overwhelming majority of Universal’s solvers are unlikely to know what you mean if you asked “Do you solve in Across Lite?” In a puzzle like this, it really needs the circles to do it justice. Literally every time I’ve introduced a new solver to Universal when they were running a circle dependent theme (which is quite often), the theme has completely eluded the solver, and they found the directions frustrating. That’s unfair. And offering a different “improved” version at this site seems to be a direct acknowledgement that the one offered to the masses is subpar. Mind-boggling from the puzzle that, per its website, “…sets the standard for all daily crosswords.”

I guess I’m done HEMming and HAWing about that for the day.

Other than that, the puzzle was fine. Maybe the fill felt a little dated at times. I’M A MAC is a reference to a pretty dated commercial, NOON DAY SUN sounds very quaint, like something I expect to hear out of Grandpa’s mouth as he recounts a story from his childhood. And Phil DONAHUE… is he still on TV? I haven’t thought about him in ages. HUE & CRY feels rather old as well. Makes me visualize the Elizabethan Era.

Fun clue for [It’s found in “apartments”]. ART. And loved the grammar wink in [Is for adults or children?] ARE. As both “adults” and “children” are plural, they would require the verb “are” over “is.”

I hope my complaints about this one don’t overshadow the respect I have for Paul and his work.

The title’s a little awkward, but it’s to be read literally. The word OF is inserted into the middle of well-known phrases and common words to create new, crossword-wacky phrases. In each case, the O ends one word and the F starts a new word. 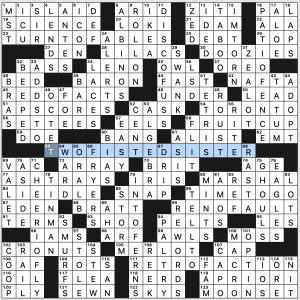 At first, I didn’t realize these were based on actual words and phrases and it felt too random. Once I looked closer and had my aha moment, I was satisfied with the wordplay.  Some work better than others, as is often the case, but on the whole, these work for me.

I’m impressed with the consistency here and the added constraint of splitting the O and F. The theme doesn’t just add OF to existing phrases, but adds the letters in such a way to make two words from one. That seems like a much higher bar to reach for. For example, changing PIG STIES to PIG SOFTIES wouldn’t work with this theme. But oh hey, this one would work, but it’s way too long: IT’S ALWAYS SO FUNNY IN PHILADELPHIA.

Not much to gripe over either. The clues are on the straightforward side as is common in the Universal Sunday.

There was a lot of attention to detail in this theme, so even if each entry isn’t individually humorous, I’m impressed with the overall effort. And the fill is quite nice. Four stars.

Something fruity about this puzzle…

THEME: Fruits are hidden in jobs 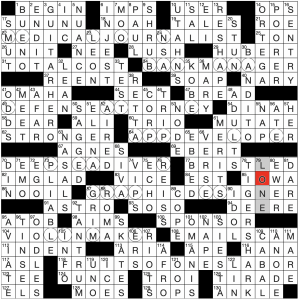 Something a little more standard to day. Over-the-plate and easy to grok thematically, but rather challenging in the fill. Despite the plethora of things I didn’t know, I still solved fairly steadily from North to South, really a testament to the construction when you can still complete a puzzle despite not knowing a lot of the trivia.

It did feel a bit heavy on proper names in comparison to more recent offerings. For me, some difficult areas were John SUNUNU (needed every cross and still wasn’t confident in it), NOAH Cyrus, HUBERT, RETTA [One-named comedian on “Good Girls”] (also, I read that as “Golden Girls,” so that didn’t help, the novel “Eleanor & Park,” ALI Fazal, AGNES Moorehead, SIVA, the Chi-Lites, HANA,  Justin LIN, Mike REISS.

Not quite sure I understand the pun behind [Three of clubs?] for TRIO.

Flaming MOE’S was the temporary name of… I’m assuming Moe’s Tavern on The Simpsons?

[Landlocked state with the island city Sabula] IOWA. Who knew?

Not a huge fan of the vague ONE’S pronoun in entries, as it appears in the revealer, but I can COPE.

Themes like this are harder than they seem to find viable entries for. Nice work on Evan’s part finding interesting phrases to fit.

Theme: Each theme answer is a person’s name that includes letters spelling out AGE in the middle. 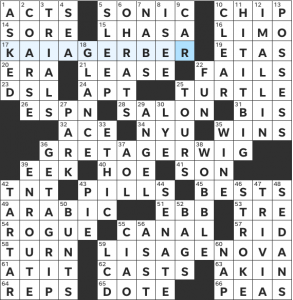 I had no idea for KAIA GERBER and LISA GENOVA, though Still Alice made the latter feel more familiar. I got GRETA GERWIG on the first go, and it immediately made the theme apparent. I appreciated that, with this grid, since it’s titled “Age Group,” that we have three humans together in a “group” whose names happen to include AGE. I feel like someone should tell them.

This grid is asymmetrical, and I didn’t love the two sets of three-letter clues above and below GRETA GERWIG. Their clues were solid; it was more that the big set of black squares in the middle left and the Utah set in the middle right made me feel trapped in the middle of the grid. On the other hand, I enjoyed that, once you made it past that portion of the puzzle, there was this much more open lower half.

Overall, I moved through this puzzle quickly. The theme was helpful in filling in the center letters, especially since I only knew one of the three named themers. My feeling of getting stuck in the middle was more psychological than anything, but I appreciated the smooth fill of the top and bottom portions of the grid.