Theme: Each theme entry begins with a type of mail 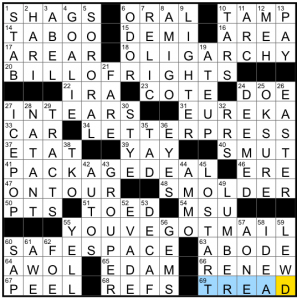 Congrats to Emily on her NYT crossword debut! I only saw YOU’VE GOT MAIL for the first time a few years ago, and thought that it held up pretty well (other than, you know, technology-wise). It’s the basis for a fun theme today, with BILL, LETTER, and PACKAGE neatly repurposed in their answers. I’m predisposed to like this theme, though, because I love getting and sending physical mail of all types (well, besides bills, but those hardly count as real mail).

I broke the 3-minute barrier today, which is extremely rare for me even on a Monday, so I’m curious how this will play difficulty-wise for folks. Looking over the puzzle now, here are a few reasons I didn’t have much trouble with today’s puzzle:

Balancing all these aspects to make an easy-for-all-sorts-of-people puzzle while still adding extra spice for those of us who solve every week (today I loved OLIGARCHY, SAFE SPACE, and OK SURE) is an extremely difficult task for a new constructor, and one that Emily pulled off beautifully here. Can’t wait to see more of her work! 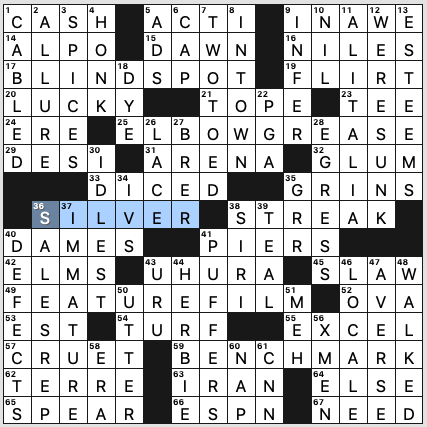 Hey, that works. Nothing too fancy or tricky, but a tried and true theme with a pleasant amount of wordplay. A good way to break in the noobs to the way things are done in crosswordland.

My top bits of fill are ALITALIA (which I didn’t know wasn’t around anymore), “WE’RE SUNK” (I wanted “WE’RE DEAD” at first), the TWO-TOED sloth, and HERBIE Hancock.

Not so sure about IDLEST [Least productive]. Idleness doesn’t seem like something with degrees to it. 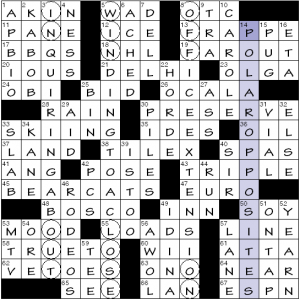 Skeletal write-up today, as I have a dental appointment this morning.

These are great finds, in part demonstrated by how succinct the clues for them are.

Theme: The outer letters of each theme answer spell PEN. There are two P/EN splits and two PE/N splits. 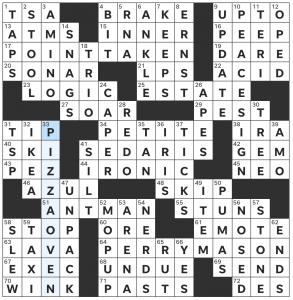 I blazed through this puzzle– I don’t really look at my times for USA Today puzzles but I think they float between four and seven minutes, and I solved today’s in three minutes. I suspect this is because of the high amount of black squares in this puzzle which allowed for super smooth fill (even by USA Today standards) and also fewer / shorter words in general. (There were 48 blocks; by contrast a typical NYT Monday will have 38.) 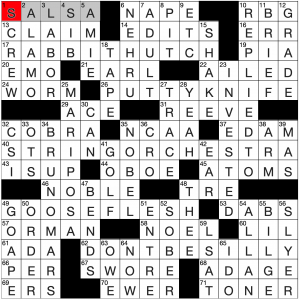 Here’s a little twist on the “words that can follow the same word” trope: a revealer with a negative. To parse the theme, go to the revealer at 62A [“C’mon, get serious!” … and an admonition evidently ignored by the starts of the answers to starred clues], which is DON’T BE SILLY. The bit about “evidently ignored” means that, in fact, the theme answers are SILLY, or, rather, that the first word in each theme phrase can follow the word SILLY to make a new phrase. 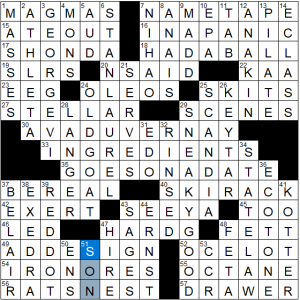 A central stagger stack AND 8-stacks in the corners from BEQ today.

Nothing in those stacks is terribly exciting – except AVA DUVERNAY‘s full name, but they allow for lots of longer crossings. All but one of the downs crossing the center stack are 6+ letters (including the apt SNEAKY GOOD) and the corners are similarly open.

Overall, the grid felt pretty fair as I solved it. (28d- Golfer Bernhard) LANGER is a bit of a deep cut — it’s been nearly thirty years since his last major victory (the 1993 Masters), but the crossings are all reasonable.

The more I look at the shorter stuff the more it’s sticking out to me. I didn’t notice it mid solve, so feels unfair to dwell on it now. On to notes: 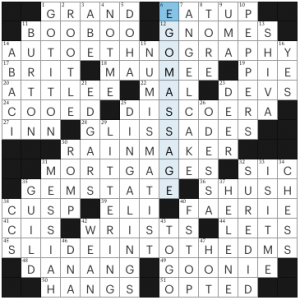 Solid puzzle today, and I can’t imagine the solvers who usually complain bitterly about the frame of reference in Natan’s puzzles will have anything to gripe about here. I hadn’t known the term AUTOETHNOGRAPHY, but with some crossings in place, it wasn’t too hard to piece together AUTO (“personal experience”) and something-GRAPHY.

Since YES gets a James Joyce Ulysses clue, I’m going to stray from my usual orderly format. I like seeing BOOBOO instead of the overused OWIE. Had no idea there were GNOMES on a George Harrison album cover. I learned that the DISCO ERA started 2/14/70, when I was 3 1/2 and ready to move. Neat little trivia bit for Idaho, the GEM STATE with star garnets. SLIDE INTO THE DMS feels a little off; isn’t there more often a possessive pronoun in lieu of THE? ROOTLE, rootle, [Rummage], have you rootled today? “NOT ME!” is clued via [“Nose goes!”], a phrase I am entirely unfamiliar with; here’s the lowdown on that. EGO MASSAGE is a cool entry. I think it’s safe to assume I’ve seen people making an ANGEL CAKE on Great British Bake Off, since this recipe is by Prue Leith of GBBO, but it doesn’t ring a bell. “Ring My Bell” was an Anita Ward disco hit in 1979 with the lyric, uh, “You can ring my bell.”

“DNA” is the [Kendrick Lamar hit with the lyric “I was born like this”], and this song was on his Pulitzer-winning album.