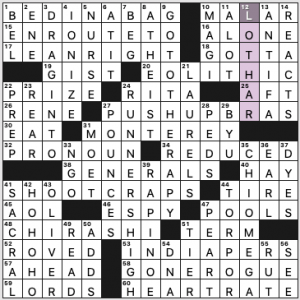 Fave fill: IN DIAPERS, SHOOT CRAPS, HEART RATE, RUNNER’S HIGH, ANTIFA, RAPINOE, GO TO THERAPY (not a great phrasal entry, but going to therapy can be a very good thing!).

Now, I do know my medical terminology, so SACRAL would have been a lot easier for me if clued via the tailbone than with 41d. [Of holy rites] (I tried SACRED). Wonder how many solvers struggled here with needing to guess the first letter of CHIRASHI, 48a. [Japanese dish of raw fish and vegetables over rice].

Too Rye Ay! This puzzle made me want to don a pair of overalls and remove my shirt.

EILEEN is the revealer at 70a [Name that sounds like a self-description of each starred clue’s answer]. Theme answers are things that lean. 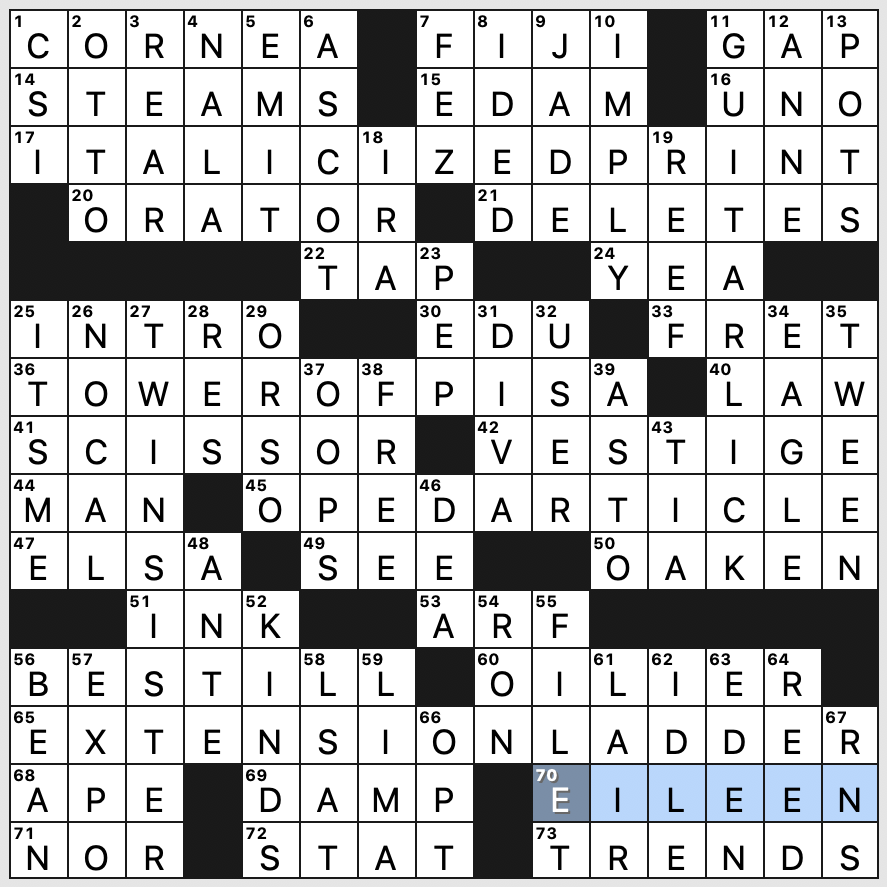 I wasn’t quite sure of the theme until hitting the revealer, and then I enjoyed a fun little aha moment. The only nit I’ll pick is that three of the four entries are things that physically lean while one has only a figurative lean.

As for the Tower of Pisa photo, I know I’ve got one somewhere of my kid making the pose, but it must be on an archived hard drive. Let’s see your Pisa photo if you’ve got one.

The grid is nearly bisected which is not something you commonly see, but there’s still some sparkle to be found, especially GUITAR LICK, TWIN SISTER, and “BE STILL.” I like when a grid starts off with an interesting word like CORNEA, too. That’s a nice touch.

Hmm. Can’t embed the overall’d video of this song, but you can watch it here. We’ll have to be satisfied with just the tune.

Theme: Each themed answer ends in a word that is a synonym to “odd,” making it both “odd” and an “end.” 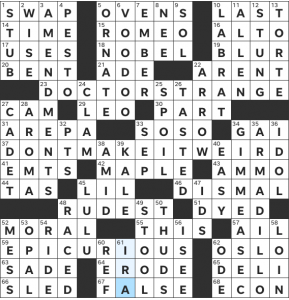 As an odd human, I really enjoyed this theme. DOCTOR STRANGE felt fun because I’m always so thrown when Benedict Cumberbatch does an American accent. I’m so used to him in Sherlock. Plus, DON’T MAKE IT WEIRD – an incredible grid-spanner that I may or may not be often on the receiving end of.

THIS was a nice break from a paper I keep drafting and re-drafting, so thanks to Malaika for this puzzle. I had a good TIME. Have a great weekend, y’all!

Happy Friday solvers! Tons of stuff I didn’t know in this puzzle, but I scraped by (I tried “Eric” and “Erik” before finally getting ERIQ, I just couldn’t parse BBQ BRISKET in the down direction.) Bullets below, let’s learn things together: 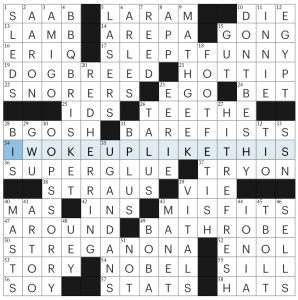 Phew, that was a lot!! Props to Wyna and the editor(s?) for making a puzzle that was still ultimately solve-able despite all the trivia that I didn’t know! Making a breezy themeless puzzle filled with references is a tough task, and I think this puzzle did it well. 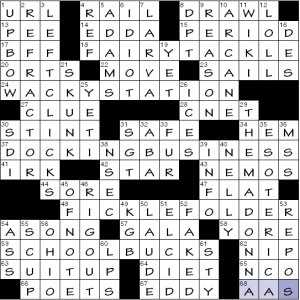 The bigram CK is inserted into various phrases to wacky effect—in one case, extremely literally.

So why CK? There’s no revealer, no explicit rationale. I also thought that there might be additional rigor to the construction in that those two letters are eschewed in the rest of the fill, but on closer inspection I noticed several other Cs in the grid.

Acronymfinder dot com suggests more than several strong possibilities but none stands out to me.

Great debut by puzzle today! We’re asked to “Think Twice” and the puzzle replaces the word ‘double’ in the themed entry with a doubling of the word. 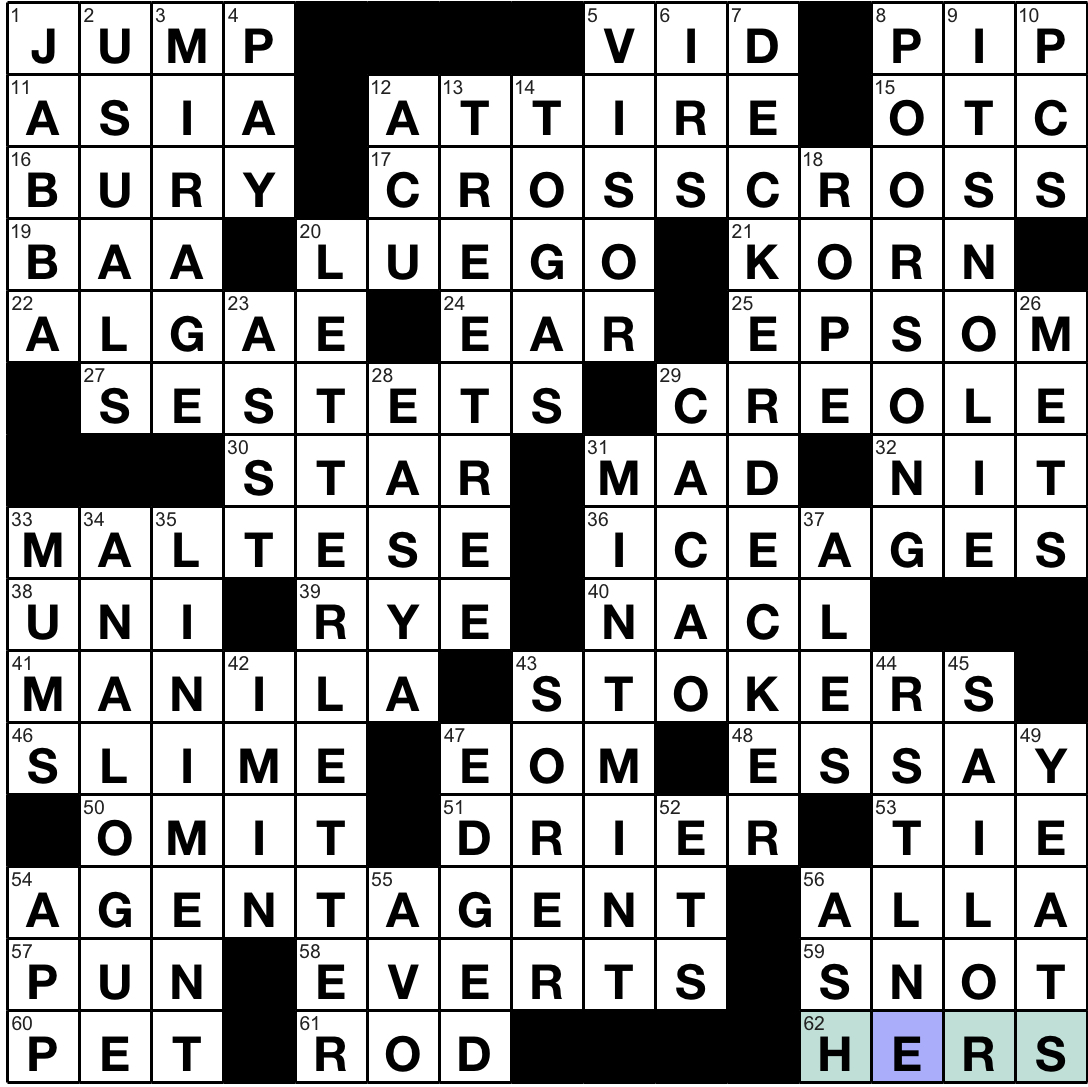 With each themed answer, I was able to suss out the second word easily, but until I had the ‘aha’ moment of the gimmick, I kept trying to think of different synonyms for ‘double’ and that wasn’t working. Once I got what was going on the puzzle was smooth sailing. There was a really impressive amount of themed answers here as well, at six and all fit the theme perfectly.

The amount of themed squares here led to a non-traditional grid layout which also added some fun to the solve. I found myself jumping around the grid about as I solved which made for a nice change and kept me on my toes.