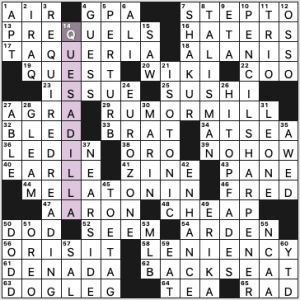 Anyone else find the Saturday puzzle easier than the Friday?

Gonna open with a gripe. Why would you clue HATERS with 16a. [“Rumors are carried by ___, spread by fools and accepted by idiots” (old saying)] when RUMOR MILL is just four rows below it? It’s one thing to say you don’t mind repeating entry words within other clues, but a sparkly 5-letter word this close by? It’s just too noticeable.

The showiest bit of this grid is the three Q’s in a diagonal row, in rows 2, 3, and 4. REQUIRED READING, TAQUERIA, QUESADILLA, and PREQUELS are qqquite nice. Also liked RUMOR MILL, PENCIL SHARPENER (10d. [One making good points in the classroom?]), EUROZONE, Tupac SHAKUR, BACKSEAT, MELATONIN, and HI-TOP FADES ([Cousins of crew cuts]). My son had grown out his curls during the pandemic but just got a hi-top fade and it’s super cute.

Anyone else think they opened the wrong puzzle today by accident? 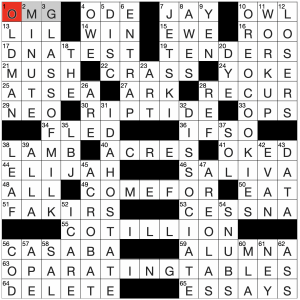 And the layers spell out CREME FILLING

Very cool grid! Not often Universal goes out on a limb and publishes something quirky and asymmetrical. I was looking forward to getting down to the southern portion and figuring out what was going on down there for the first half of the solve.

The payoff is just fine. The entries that were uncrossed still included a strong nudge from the clue for OREO COOKIES. Otherwise, I’m not sure I would’ve gotten COTILLION, which is a gutsy entry to include without any crosses. That bottom right corner in general slowed me down. Thank goodness for the extra anagram hint in NEY. Also, pretty sure the ESSAY is still on the SAT (if my recent proctoring is any indication), just optional now, so I don’t think calling it “former” is totally fair.

I really like the audacity of the construction here. And a very cute tribute to Crossworld’s favorite cookie. 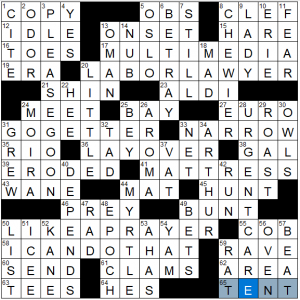 Familiar theme style from Kate this Saturday, but it’s rare to see it with a five-letter word.

The title points straightforward to the theme, as the letters of “LAYER” bracket each themer:

And of course, each themer breaks up LAYER in a different way.

I’m sure others have said this, but I quite like USA Today’s willingness to run three themers. There’s been something of an arms race over the last 5-10 years in the Times to fit more theme content, even into early-week grids, but of course that puts more constraint on fill. And we can see that tradeoff in this grid, with entries like PLEASE GO ON, URGENT CARE, I CAN DO THAT, MULTIMEDIA, and GO GETTER.

No notes from me today. Have a great weekend! 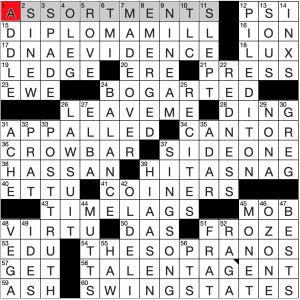 This was a little tough! This one almost took longer than today’s Stumper for me to solve! I don’t think I know Beth at all, but this is a great puzzle, whatever your contribution to it was. Interesting entries, wide-open areas, the whole bit. I like having this puzzle be a little more difficult. Yes, I even made an error in this grid! I wanted 58A to end with TALENT; my brain was playing tricks on me! Again, great puzzle, you two! 4.6 stars from me. 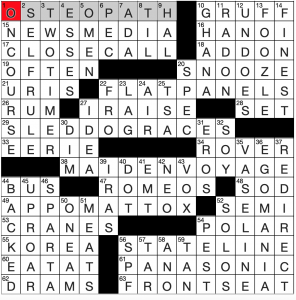 Under 10 minutes! Actually under NINE minutes! Flew very smoothly on this one, for once in a Stumper. Nothing too thorny, but perhaps the wide-open areas are made easier with a plethora of three-letter words. Who knows? I’ll take it anyway. A solid 4.5 stars from me. 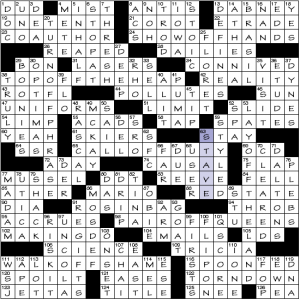 Okay, here it is. Three-word phrases in the format “x OF y” where the OF is changed to OFF, to humorous effect.

I feel it’s a cohesive theme. Off course, your mileage may vary.