Today’s Sunday NYT is a team effort from Daniel Okulitch and Doug Peterson in which they imagine side hustles for folks in other jobs.  It used to be that a lot of folks could earn a living with just one job, but with companies less often paying their employees a fair wage and compensation compared to the ever-rising cost of living, folks are having to hustle and work multiple jobs just to make ends meet.  Oof!  At the very least, that makes this puzzle feel quite apt for the times! 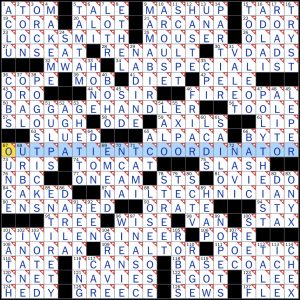 I enjoyed this theme and appreciated that each play on words was a satisfying aha moment while solving.  A small thing I didn’t enjoy as much about this puzzle was the plethora of proper names, some crossing tougher fill (54D crossing 59A or 61D crossing 81A (at least for me), say).  Hopefully you fared better with the who’s who amongst this puzzle’s answers! 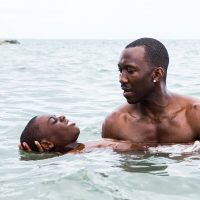 Random thoughts:
– 5A: TALE [Grimm account] – I enjoyed this wordplay, especially considering how grim their fairy tales actually were – certainly different than the Disney-fied versions!
– 115A: TATE [Museum that awards the Turner Prize] – This was a fun new bit of trivia for me!  I like the idea of museums promoting cultural growth in ways like this.
– 6D: ALI [Mahershala of “Moonlight”] – I appreciated this LGBTQ+ reference here, when they could have easily clued him via “Green Book” (or via a different ALI all together!); maybe it was because it made the clue alliterative, but I’ll take it.
– 124A: HEDY [Actress and inventor Lamarr] – I loved seeing her clued or her contributions to science (the origins of WiFi, Bluetooth, and GPS!) and not just her looks or time as an actress. Talk about a multi-hyphenate!

What did you enjoy about this puzzle?  Let us know in the comments!

Take a breather with today’s puzzle!

THEME: Words having to do with breathing are either inserted or subtracted from common phrases. Wackiness ensues. 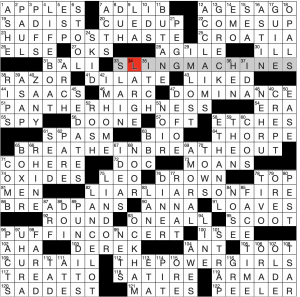 I found this one… bizarre. Not the concept of course- adding and subtracting things to common phrases is a crossword staple. Words for breathing just seems like an odd place to go with it! The resulting phrases are over-the-top wacky, which is what makes it work just fine. Go big or go home on the wackiness. But after uncovering the first two themers and trying for a bit too long to figure out what needed to be added to SLING MACHINES to create a common base phrase, I figured I’d wait til the grid was filled in and appreciate the theme post-solve, which I did.

The grid was challenging for me, reminding me of last week in the sense that somehow it filled in steadily from north to south, yet there were moments where I didn’t think I knew a darn thing. Probably the most difficult area was the northeast, where PEGG, GORECKI, IDA, and ASTIN resided (all either new or not readily available to me). Risky, especially crossing the oddest of all the themers, SLING MACHINES. CROATIA was tricky as clued too [Rijeka Carnival nation]. I entered FINLAND initially. Is it just me, or does “Rijeka” look quite Finnish-y?

Other new names included MARC Lamont Hill, Susan ISAACS, and OCKHAM (though the nudge in the clue was pretty awesome [English village that’s said to have been the birthplace of the friar William (known for his 38 Across)]. 38A, of course, being RAZOR.

I do remember there being some excellent clue/answer pairs. Lemme see if I can find those…

92A [Shaped like this answer’s second letter] ROUND. Neat little meta-clue. I got it with no crosses! (pats self on back).

Not my favorite puzzle of the year, but a fun solve all-in-all. And of course, who wasn’t singing this after uncovering the revealer:

Theme answers today are familiar phrases whose second word can also be a type of social event. Crossword-wacky clues re-imagine these phrases accordingly. 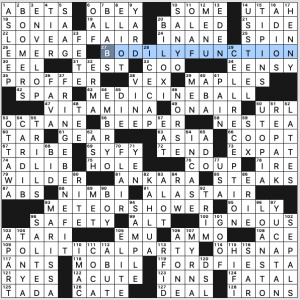 Very nice. I enjoyed these for the most part, especially the puns you don’t see very often like FUNCTION, RECEPTION, and BENEFIT. In fact, BODILY FUNCTION, made me smile enough to last me through the rest of the grid. And the title is perfectly apt.

With theme material in both Across and Down directions, there’s not much room for long fill, but there are still some entries to be enjoyed such as BOOMERS, YUCATAN, “OH SNAP!,” VITAMIN A, ALASTAIR, ANKARA, IGNEOUS, the UTOPIA / EDEN duo, BILOXI (despite my having lived there), and MARISSA Mayer (though she spells it wrong, unlike my daughter Marisa who was born in BILOXI).

I like the word PROFFER which you don’t see too often. Somehow it has a friendly, comfortable feel. Maybe because it sounds akin to “professorial” which I view similarly.

Somewhat of a dupe in US STEEL and USA, though they’re far enough apart that one might not notice.

A pleasant Sunday puzzle with a fun theme and almost no kludgy fill. 3.75 stars.