Theme: The letters QU are added to familiar phrases. 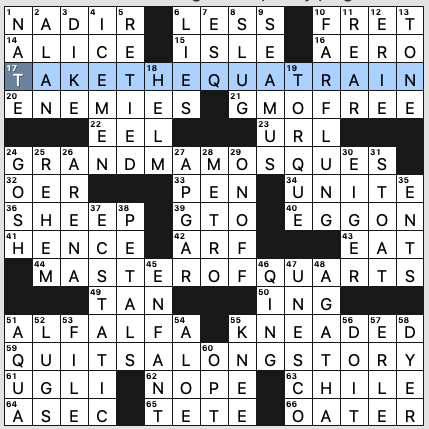 Works well enough, yeah? I didn’t get a lot of yuks (as in laughs) out of these, but YMMV. It can’t be so easy to find suitable phrases that can take Qs, so I’m sure the pool of potential theme entries is limited. I found the first two entries to be more interesting than the latter two.

Not a lot of long fill to enjoy today, but FAR-FLUNG and ECSTATIC are nice. Meh to REHEM.

It helped to be married to a pediatrician to get APGAR [Test for newborns]. The test is named after the doctor who invented it (Dr. Virginia APGAR), but a backronym has since been applied to it to stand for: Appearance (skin color), Pulse (heart rate), Grimace (reflex irritability), Activity (muscle tone), and Respiration. 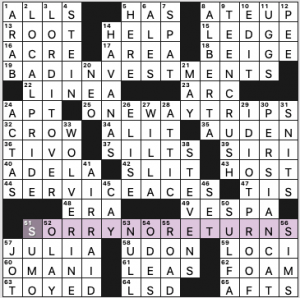 Today’s puzzle played like a Monday or Tuesday to me, but with the treat of six juicy long Downs (LOCAL PRIDE, LORD IT OVER, WOLVERINE, TEEN CRUSH, IDIOT-PROOF, PERSIAN CAT) in the fill. The revealer is 51a. [Sign in some clothing stores … or a hint to 19-, 25- and 44-Across], SORRY, NO RETURNS. Here are those related themers:

Decent theme, but it doesn’t resonate with me the way an unpublished Ross/Jessie collaboration, described in this moving essay, did. The art of crossword construction as a pain management strategy, who’d have thought it? 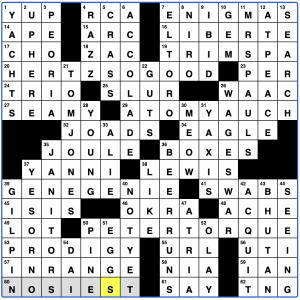 The AVCXpansion is 89% of the way to its goal of a second weekly puzzle, midis, a cryptic, and more, with 22 days remaining.  Find out more details and contribute if interested here!

Francis Heaney has this week’s AVCX, and it was perfectly on my wavelength of both science and music-related puns:

Just a great blend of song- and artist-name-related puns.  I’d expect no less from Francis.

RIP to Mike Nesmith, who played with PETER …er, Tork, as part of The Monkees

There’s a bunch of fill in the puzzle that could also be interpreted musically – the record label RCA, which anagrams nicely into ARC (“One side of a record, say?”), ZAC Brown Band, TRIO (“The Beatles at the time they recorded “I Me Mine,” e.g.”), SLUR (“Curved line indicating a slide from note to note”), YANNI, Huey LEWIS and the News, PRODIGY (either the band, or, as clued, “Five-year-old who can nail Chopin études, e.g.”), Jethro Tull’s IAN Anderson, Neil YOUNG, and others.  It was all nicely, quietly thematic, and I liked that a lot. 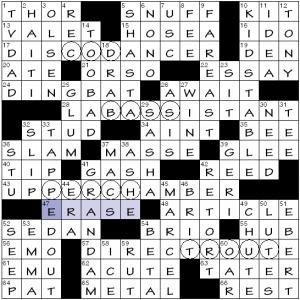 All right, that’s all I’ve got for this one. Just need to add some text so that the formatting with the Rubberhead image looks good. There we go.

Covering today’s USA Today as well (and Friday’s) this week and I am so glad I got this one.

This theme was spot on for me! I love foods of all kinds and when traveling my first priority is the cuisine, followed by enjoying the culture and neighborhoods, with a distant third of sightseeing. It seems that a lot of who we are is expressed through our food. If you love it as well, this is a puzzle for you, and if it’s not so much your thing, there’s still enough delight in as well with the other non-food entries. 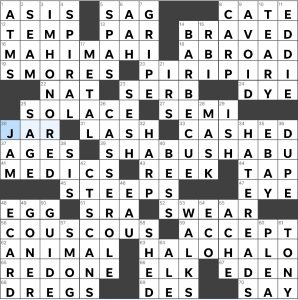 Theme: each themer is a repeated word that is the name of a food

Food so nice, you have to say it twice! A total of five themers today that kept me wanting more. With the typical three in most puzzles, the total of five was a fun surprise. MAHIMAHI is a delicious white fish that I’ve been lucky to enjoy in Hawaii, on the North Shore of Oahu. PIRIPIRI is a spicy pepper sauce that I’ve been meaning to order a spice blend from Spicewalla and they have a fantastic article about the spice. SHABUSHABU is a perfect winter dish, often served as a shared soup/broth with thin meat that you swirl it in to quickly cook and veggies and tofu set in until soft and cooked through; so versatile and customizable that it can practically be anything you want—I’m a fan! COUSCOUS is delicious grain in a variety of sizes, though the few recipes that I’ve tried are so dry that I haven’t made it much. HALOHALO is a stunning dessert of colors, flavors, and textures, often layered and very sweet, there’s always some variation.

Stumpers: MEDICS (I was stuck on “marcher”), ANIMAL (thinking too hard about the relationship in the clue), and ALE (wouldn’t consider it alternative so needed crossings)

Beyond the extra tasty themers today, this puzzle is JAM-packed (literally!) with other food clues throughout. There are still many other entries that are non-food related but it seems that a majority are today, or if not a majority then at least a significant increase from a typical puzzle. I find it find to fit in tangentially theme related entries that aren’t themers. (It’d be interesting to see that with other themes, just a thought.) Also, stepping back to take a look at the grid, it’s asymertical but with just enough similarities throughout that to me it almost looks like it does—great design that is unique but not jarring. Love it! I hope to see more of these types of grids too!

I’ll leave you today with a bonus holiday treat from me, playing on today’s theme: bonbon! 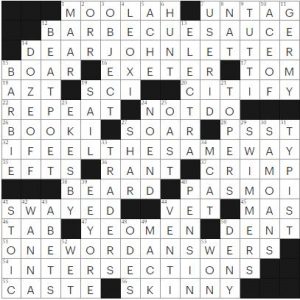 Fun grid from Liz Gorski today, with long acrosses and sort of a hybrid feel between staggers and open corners.

Those long acrosses are all excellent – I particularly loved ONE WORD ANSWERS (51a- “Perhaps” and “Maybe”), and the clever clues for DEAR JOHN LETTER (14a- Ex communication?) and BARBECUE SAUCE (12- Stick-to-your-ribs cookout staple?), the latter tripping me up until I got enough crosses.

The northeast corner had more names than I’ve seen the last few Wednesdays: Picasso muse Dora MAAR, blink-and-you-missed him Pope LEO XI, and BARBIE, clued to her sister Skipper. Sports crosswordese haters will be glad for 2d (“Dragonfly Song” author Wendy) ORR, while other old standbys EFTS, ACHE (5d- Reminder of a deep-tissue massage), and the telegraphed OBJECT (3d- U.F.O. component) help offset the corner if anyone is really stuck on all the names.

Lots of fun clues in general on this one – EEYORE (39d) indeed wears a pink bow on his tail, and it was fun to remember that; I had a head-slap moment after figuring out BOOK I (26a- First section of Euclid’s “Elements”), and I learned something new about Starbucks at (44d- Starbucks size that’s twenty ounces for hot drinks but twenty-four ounces for cold drinks) VENTI. And I cheered to see Connie MACK (49d- Baseball Hall of Famer Connie), the dapperest and winningest baseball managers, make his way into the grid. 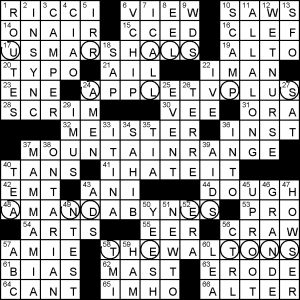 Matt Scoczen features a common thematic trope this Wednesday with words spelt out across circles in four long theme entries. The revealer is placed centrally at MOUNTAINRANGES. The mountains are the URALS, ALPS, ANDES… and TETONS, with the last being considerably less GRANDE.

I liked the stack of WETNURSE/ALLALONG. Other highlights were VCHIP, SAHIB and the clue for ABC [It can replace “pie” in an idiom].