And now for something completely different. Joe Hansen brings us the phases of the moon in rebus form. The revealer is LUNAR PHASE (58a, [What’s represented by each circled space and one black square in this grid]). In those circled squares, the word MOON waxes and wanes as we travel clockwise from the New Moon (the black square above square 60) up through the Full Moon at the top of the diagram then back down to the New Moon. A pretty spiffy set-up if you ask me. 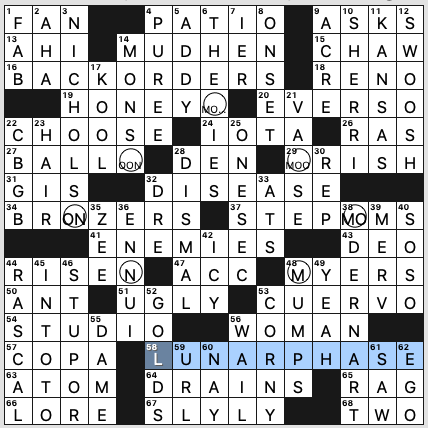 In a bit of elegance, note that MOON is four letters, and in the two instances where we have half-moons, we have exactly two letters in use: the ON in BRONZERS / NICHOLSON and the MO of STEPMOMS / MODERN ART. The full moon uses all four letters of course.

For completion’s sake, here are all of the rebuses and their corresponding phases: 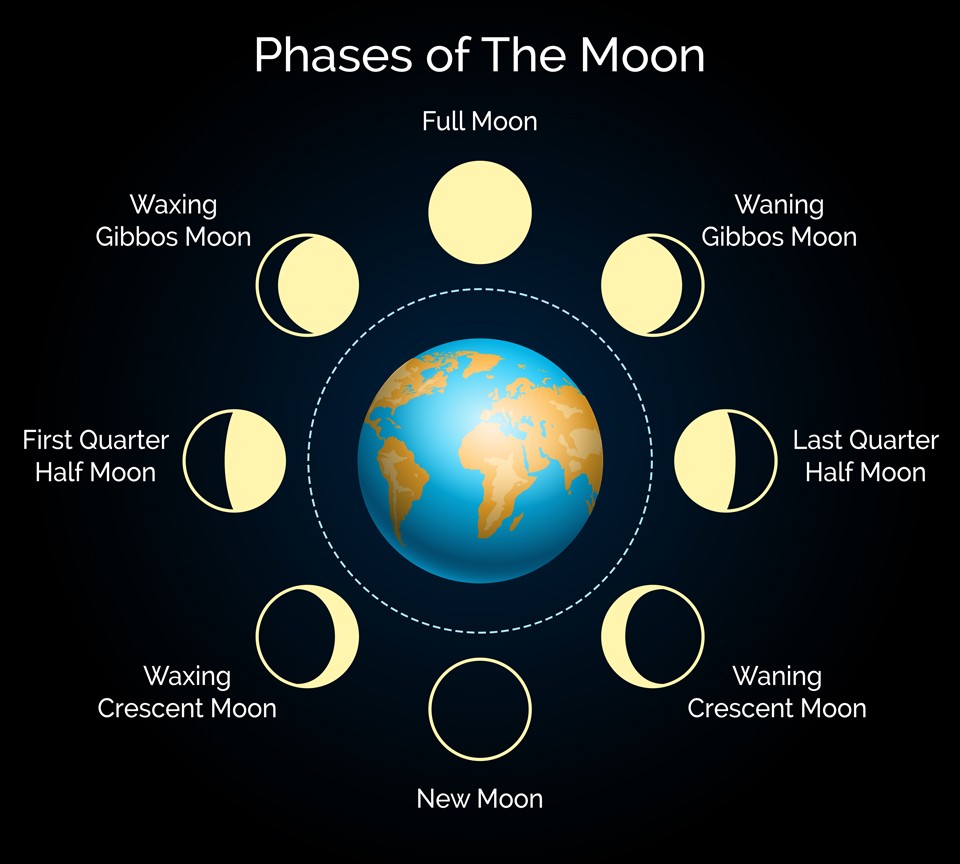 This is quite elegant and I’m glad to have found an image that matches the grid.

The only nit I’ll pick is that I wish the New Moon black square was separated from other black squares to make it more pronounced. Note that the grid is perfectly symmetrical—as a normal crossword grid usually is—except for that one New Moon square. But it’s not so easy to notice since it’s connected to two other black squares. I don’t know if an alternative configuration is at all possible, but as it is, it took me a non-zero number of seconds to identify exactly which square was meant to be the New Moon.

The rest of the grid is quite nice with BACKORDERS (a timely entry in this holiday/COVID season), MUDHEN, RASCAL, STUPOR, etc.).

I love the inventiveness of this theme as well as its execution. 4.5 stars from me. 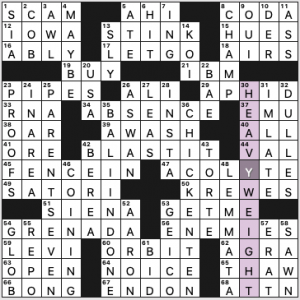 Unusual theme here. The four longest Down answers need to use a “routing number” to be completed. The last letters in each of those entries happen to spell out a number, and if you go to the square where that number is found, that short Down entry completes the long one:

Overall, I didn’t much enjoy the puzzle. So many of the clues seemed more obstinately tough than cleverly challenging:

Did not know: 48d. [Logician’s propositions], LEMMATA. Who knew that was an allowable plural of lemma? 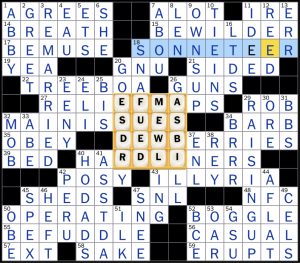 Trenton Charlson has today’s NYT, and it’s a tribute to a different sort of word game:

The middle part of the grid (which starts out as shaded squares, but becomes the actual BOGGLE board seen in the screenshot) contains all the letters to make BEWILDER, BEMUSE, and BEFUDDLE, connected BOGGLE-style.  On the app, this also animates out how each of these works, which is cute.  For me, this fell into the camp of being an interesting exercise in fill that I’m not sure was as fun a puzzle to solve as it was to work out.

That BOGGLE board is composed of RELIEF MAPS (“Depictions of lands’ ups and downs”), MAIN ISSUES (“Focal points of a debate”), DEWBERRIES (“Brambles with edible purple fruit”), and HARDLINERS (“Uncompromising sorts”).

Elsewhere: It took me all sorts of staring to realize Twelfth Night takes place in ILLYRIA.

Editor: Amanda Rafkin
Theme: Each theme answer (which are placed vertically in the grid) has a final word that can be preceded by the word “door”. 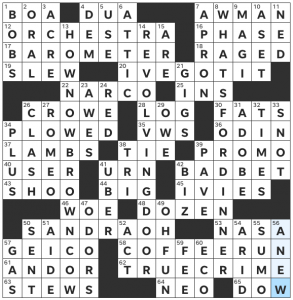 Absolutely fantastic puzzle by Christina today. The three theme answers are all fun and evocative (and are 13 and 14 letters long to boot, notoriously annoying lengths to deal with). They all tie in nicely with the title of the puzzle as well.

This crossword to me is living proof that a puzzle doesn’t need to be incredibly difficult or have a complicated theme in order to be interesting and fun to solve. There are 6 across answers that are 8 or more letters long, and not one of them is wasted. The bottom section that includes SANDRA OH, COFFEE RUN, TRUE CRIME? Perfection. The only part of the puzzle that I’m not enamored with is that big stack of 3’s in the middle (oh, and A SET, which is an odd partial), but that’s a minor nitpick on an incredible puzzle. 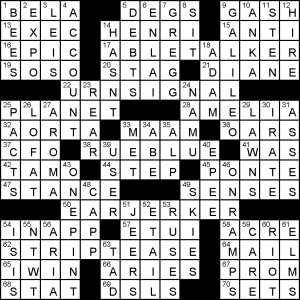 Today’s puzzle by Chris Sablich features another basic theme, neatly executed. The revealer is STRIPTEASE, and each of four answers loses an initial T. So, we have (T)ABLETALKER, (T)URNSIGNAL, (T)RUEBLUE, and (T)EARJERKER. I personally have no idea what a TABLETALKER is, though Google suggests some kind of advert stand?

I also struggled a bit in the area in the top-right where there were several names, though the choice of clue also played a role. I confess I can never be sure of the vowels of GALLILEO Galilei and then AMELIA is clued as an island, ADAM is clued as a sports person Silver who isn’t NATE, and NAMU is suspiciously similar to SHAMU.

THEME: Book titles with celestial bodies in them. 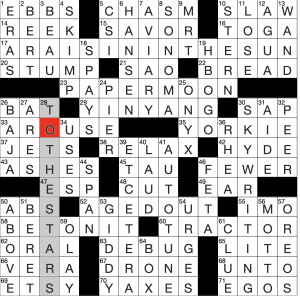 Nice, simple and effective theme. And the left/right symmetrical grid never felt crowded. Some nice longer answers made it a bit difficult at times to visually determine where the themers were, but the asterisks in the clues helped keep the solver on track in that aspect.

A little side-eye for HBO GO, which I believe is not-a-thing anymore. Looks like the clue sidestepped that? I guess it still exists in some countries! I was a bit bummed when they switched to HBO MAX because whomever was logged in to HBO GO at my house never logged out, so I was able to mooch for years.

Looking forward to more from Elizabeth!

Theme: Each theme answer includes a dog breed after a word that sounds like that breed. This similar sound comes from an exact repetition (imitation) of the consonants in the dog breed. 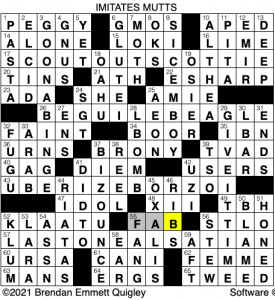 As a dog person, I thought that this was a fun one. It was also super helpful in the rest of my solve, though I spent some time confused by UBERIZE BORZOI and LAST ONE ALSATIAN. For the former, it was because I had not previously heard of Borzoi dogs (they’re cute) while for the latter, I was so sure it was DALMATIAN until I caught 55d [“Snake tooth”] FANG and 55a [“‘Nifty!’”] FAB.

A couple of stumpers for me were 52a [“‘The Day the Earth Stood Still’ alien”] KLAATU and 2d [“Medieval Moor fighter”] EL CID, and I like history and sci-fi, so those were two particularly tough breaks. I did enjoy the two G-forward long Down clue in 29d [“Patience”] GIVE IT TIME, as well as the nod toward the nerdiest fabric in 65a [“Suit material”] TWEED.

Anyway, that’s it for me! Fun puzzle, aside from a few tough ones.