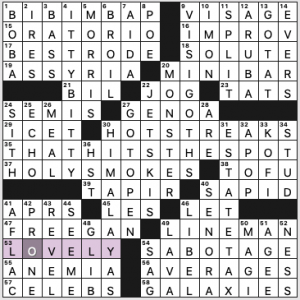 I would’ve gotten under the 4-minute mark if not for a LPVELY typo! I’m accustomed to mistyping lively and lovely, but this was just rude.

Let me head off a gripe at the pass: If you’ve managed to avoid learning the first letter of BIBIMBAP and BOBA so the first square of the puzzle made you cranky, please be more open to Asian cuisines. Don’t ask crossword editors to strip grids of food culture.

This is a debut for Amy Ensz, so congratulations are in order. Congrats!

Theme answers are familiar phrases whose first words can also be synonyms for “nation” (I guess?). Entries are clued punnily. 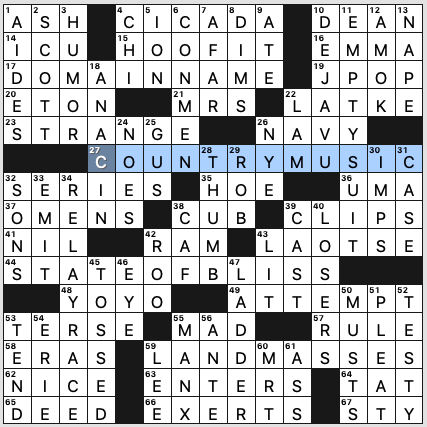 I feel like I’m missing an aspect of the theme because it feels very loose, and I had a hard time settling on what I thought the theme was. The title uses “place,” and so maybe the first words are intended to identify a place, but that feels way too broad. These places are (roughly) political entities (by their clues) and so it seems to me the first words are rough synonyms of “nation.” But if you catch something I’m missing, please let us know in the comments.

The grid is nice, but the theme didn’t coalesce for me. Maybe you fared better. Three stars. 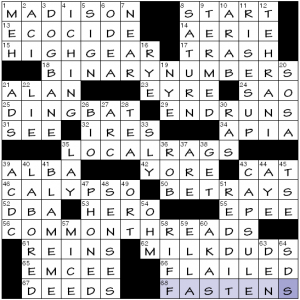 This is a simple but really strong theme and all the clues/answers are very good. 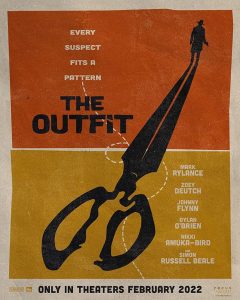 From the repetition in the clues, I’m reminded of the upcoming film The Outfit, which I initially thought—and hoped—would be an adaptation of the Richard Stark (Donald Westlake) Parker novel, a better one than the 1973 film. Instead, it has to do with a London-trained tailor in Chicago who gets mixed up with organized crime. Might still be good, just not what I was expecting. 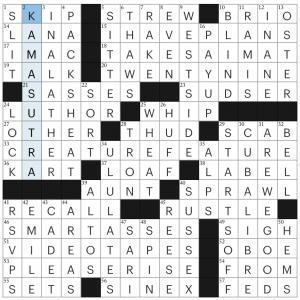 Good morning everyone! I hope you are staying safe. Today’s grid from Patrick Berry has my favorite type of layout– pinwheel-ed stacks of three long entries. AND we get a bonus spanner across the middle!! I love long entries in themeless puzzles. (While I definitely respect low-word count grids that have to rely on large amounts of six and seven letter words, they are not my favorite types to solve.) This was a super breezy solve for me, filling in many of the long answers with no crossings, but I actually couldn’t finish due to the crossing of BRIO (Vivacity) and OSTER (Brand that makes Beehive Blenders) and SUDSER (Western: oater :: soap opera : ___). I kept trying to get “Estee” in there and also have never heard of the word BRIO.

Covering again today and so glad to be doing so!

Fun clues and entries, a two-layered theme with a great set of themers making for a great Friday puzzle! 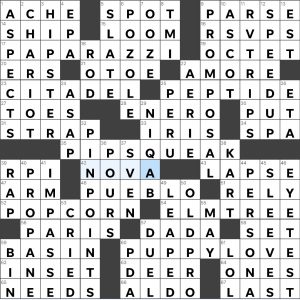 Theme: each themer starts with the pattern “p…p”

Although unsure of exactly what to expect from the title today for the theme hint, PAPARAZZI was easy fill for me so picking up on the main pattern “p…p……”. I had to come back around for PEPTIDE, as “protein” was my first instinct but wasn’t right. PIPSQUEAK is a term that I haven’t heard used in a while but had the perfect cluing for me to get that one right away as well. The classic POPCORN as well as PUPPYLOVE filled in easily too. While it’s a mix of entries for this set, there’s a secondary pattern to this theme that connects them all together. h/t to Sally’s post today for also catching a secondary pattern, that the themers proceed through the vowels: a, e, i, o, u. Given today’s title, I wanted to double check that I wasn’t missing anything for the theme and am glad to have headed over to her website to verify.

Stumpers: OTOE (new to me, glad to now know it), ELMTREE (stuck on “gum tree” until had some crossings), and SLATE (clue to open for me to narrow it down without crossings)

Thoroughly enjoyed today’s puzzle, especially the variety of entries and great clues. It’s a fun collection, in addition to the delightful set of themers.