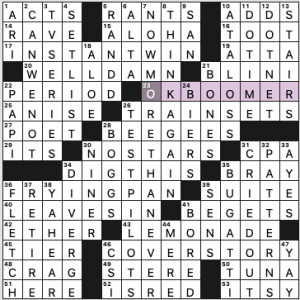 I admired the empty grid, with that center swath of 7- to 9-letter answers swaggering across the grid. The puzzle’s basically three crosswords in one, since the NW and SE chunks have only two squares in their passageways to the middle. The Down 15 connects all three sections, which facilitates the solver’s flow.

Fave fill: “WELL, DAMN,” “OK BOOMER” (nobody uses a comma in it, but I do want one there), the BEE GEES, “DIG THIS,” FRYING PAN, magazine COVER STORY, “CAN WE NOT?”, TEST PILOTS, “NOW, MORE THAN EVER…,” “THINK AGAIN,” and BUGATTI. As you can see from all the quotation marks in this paragraph, the fill is quite chatty today.

The clunkiest fill is crosswordese STERE atop weird phrase IS RED, but overall the contents here are quite smooth. 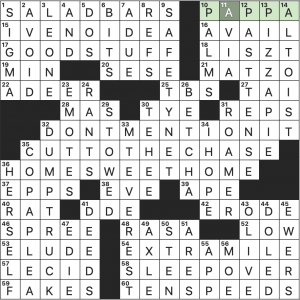 Under five minutes! I’ll take it. The Stumper today more than made up for it in difficulty! Nice stack of 13-letter entries in the middle, two of which can be called casual phrases, which are some of my favorite entries that you can put in a puzzle. To me, it makes a puzzle more, shall we say, lively? Less academic, perhaps? We always want to avoid things like tree genuses, but to have things in there that are actually in the language are what make the puzzles fun to do. I really like Craig’s puzzles at this point; I think I have done quite a few of them at this point. Keep ’em coming, Craig! 4.6 stars from me.

Still knee-deep in Foggy’s Puzzle Boat 8 (after all this time!), so maybe I will try to knock out a few more puzzles in that today. Hope your Saturday goes well! 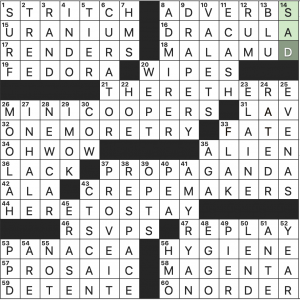 Stan got me today. Totally stumped. I have been out sick all week, so that is going to be my excuse … I mean reason for the somewhat longer solve time today. In the end, as is usually the case, all seems fair, so I cannot cry because it was TOO hard. It was just not in my wheelhouse this week. I may just have to go take a nap so I am ready for the weekend! Next time, Stan!! 4.5 stars from me.

Some of the stuff I liked (and some thorny bits!): 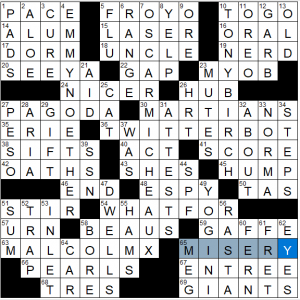 We’ve got down-running themers and “Top” in the title, so we don’t have to look far:

You come across sets like this from time to time — in trivia settings or otherwise — but there’s plenty of folks out there that they generally feel fresh to me. And I like the variety in using a mathematician, a filmmaker, and an author.

Small “award” bonus at 48a [Best Female Athlete with a Disability, e.g.] for ESPY. A considerably harder award to fit into the theme!

Does anyone else discover in doing crosswords that a word is much longer or shorter than you thought? I had that feeling with MARTIANS at 30a [Red planet residents]. It had to be right, and it was, but I sure started filling it in a long way from the edge of the grid.

Other favorite fill: TWITTERBOT, MALCOLM X, PAGODA, HRT. Not much time for more notes today. Have a great weekend! 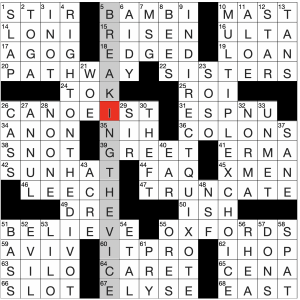 Another winner from Paul Coulter. I’ve lost track of how many bylines have been his in the past month or so, but it’s a lot. This one is very, very well done. I’ve seen adding numerals before, but using the clue number is an extra layer of nice, and all of the resulting phrases (and base phrases for that matter) are pretty great. Excellent finds all around.

Some things I didn’t like in the fill itself were NIH, NSF, TOK, IT PRO, IN OT, ELYSE (Family Ties clues seem a bit dusty to me!), and SNOT (gross). CANOEIST felt off for me too, probably because I’m no CANOEIST. Funny enough, I actually wanted ARACHNE for the clue [Olympian who might weave through the gates]. That makes sense, right?

New for me: NORMA Torres.

Good to see AIDY Bryant in there! 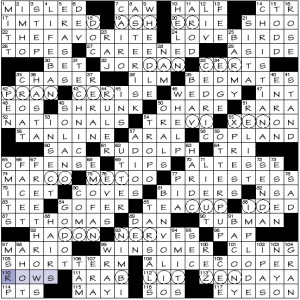 So that’s some top-tier crossword constructing.