Today we have familiar two-word phrases whose second words can be synonymous with “fees.” The first words change meaning to give us crossword wackiness. 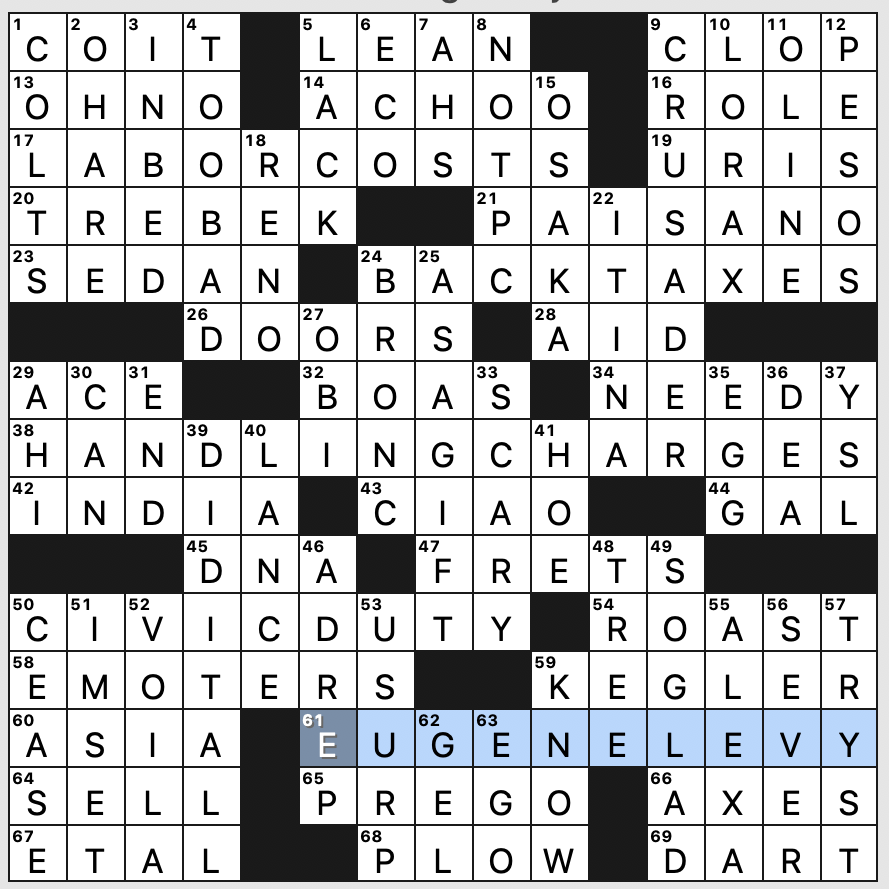 I enjoyed these even if they aren’t entirely consistent. You see, the meanings of the first words change in all five entries from their original meanings, but the second words (i.e. the primary thematic words) only change meaning in the last two entries. But what matters more to me is the overall entertainment value of the theme, and this one delivered.

In the fill I liked CRUSADER, DID IT ALL, PAISANO, “TOO BAD“, and TREBEK. I liked less EMOTERS, and old standbys NOT PC, AD REP, and I TINA. AS A GIFT was really hard to parse as well.

KEGLER [Bowler, in slang] is completely new to me. I had to look up whether or not it refers to hats or the sport (it’s the latter). If you know where that term came from, feel free to share. 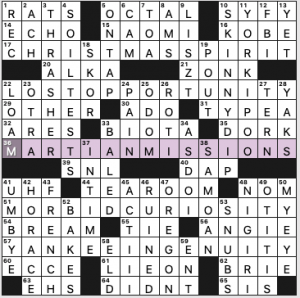 The revealer sits in the middle of the grid: MARTIAN MISSIONS, or 36a. [NASA endeavors whose vehicles can be found at the ends of 17-, 22-, 51- and 57-Across]. I believe NASA uses the term Mars mission more than Martian, though. Those four themers end with Mars rovers and whatnot:

I like that the Mars vehicles are in chronological order. 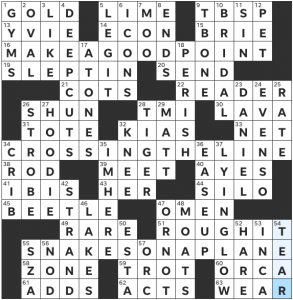 Good morning all! I’m on the east coast for the holidays, which means that my solves/recaps are done just after waking up (as opposed to at 10pm on the west coast – one of the perks of living there is getting the puzzle earlier in the day!). So I’ll blame any mistakes/slow solve times on that this week :)

I loved the progression in today’s puzzle from POINT to LINE to PLANE, especially since the first and last theme answers do such a good job of disguising the geometry word. I actually learned this SNAKES ON A PLANE fact recently from one of those Buzzfeed lists of, like, “17 times your favorite movies were almost called something else!” Apparently Samuel L. Jackson himself convinced the filmmakers to change the movie’s name back to its original working title, which he felt was more attention-grabbing. I’d say it was a good move!

Other thoughts on this puzzle, in bullet-point form: 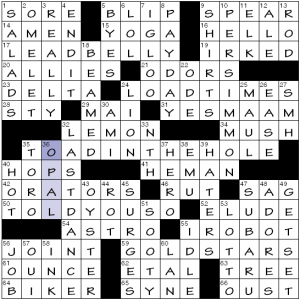 Changing LEAD into GOLD via a word ladder.

That was a rather speedy transmutation, wouldn’t you say? And an obvious choice for termini of a word ladder, so I’m sure it’s been done many times previously, but perhaps not in the context of a crossword. 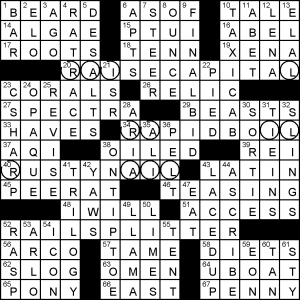 Today’s LA Times theme by George Jasper features a vibrant revealing answer: RAILSPLITTER. The theme itself is pretty simple, the letters of RAIL bookend three more answers. These were the more workaday RAISECAPITAL, RAPIDBOIL and RUSTYNAIL. I think BEARD and PENNY are meant to be bonus theme answers of a sort. It’s an odd time of the year for this theme, but I’m guessing February was full?

The rest of the puzzle was fairly safe, with not a lot of big highs or lows. One answer; [Makes potable, as seawater], DESALTS; made me raise an eyebrow. That’s an odd way to say “desalinates”. 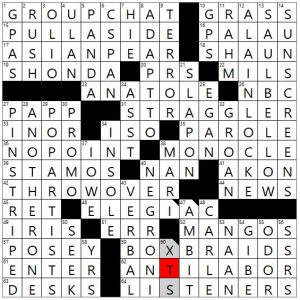 So much fun stuff from Anna today that I’m moving right to notes:

A few unfamiliar names to me – Norman RUSH and Joseph PAPP – but both are in those excellent corner stacks with plenty of other footholds and colorful answers. ALAIN LOCKE and SAUL BELLOW in the NE stack along with Gunter GRASS, SHAUN White and AKON crossing could be a trouble spot for some, but each name come from a pretty different orbit, so hopefully no one is totally stumped. 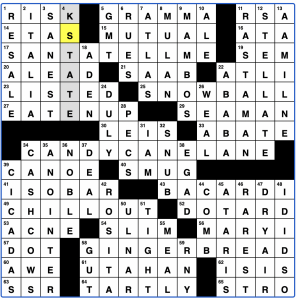 The AVCXpansion is happening! We’ll be getting a second weekly puzzle, midis, a cryptic, and more, with 15 days remaining.  Find out more details and contribute if interested (since there’s still time) here!

This week’s puzzle is a themed themeless (which I know seems oxymoronic, but work with me here) from Elizabeth C. Gorski.  I probably should have read the note with the puzzle before diving in on this one, because I definitely spent a good chunk of time trying to figure out what the theme was, when it’s just a holiday themeless.  Anyways, onto the fill:

This was another solid entry from Elizabeth C. Gorski – happy holidays, all!