The revealer is SECOND OF TWO (59a, [Latter, or, homophonically, what 17-, 31- and 44-Across each have]). The other theme entries are familiar three-word phrases where the second word is a homophone of “two.” 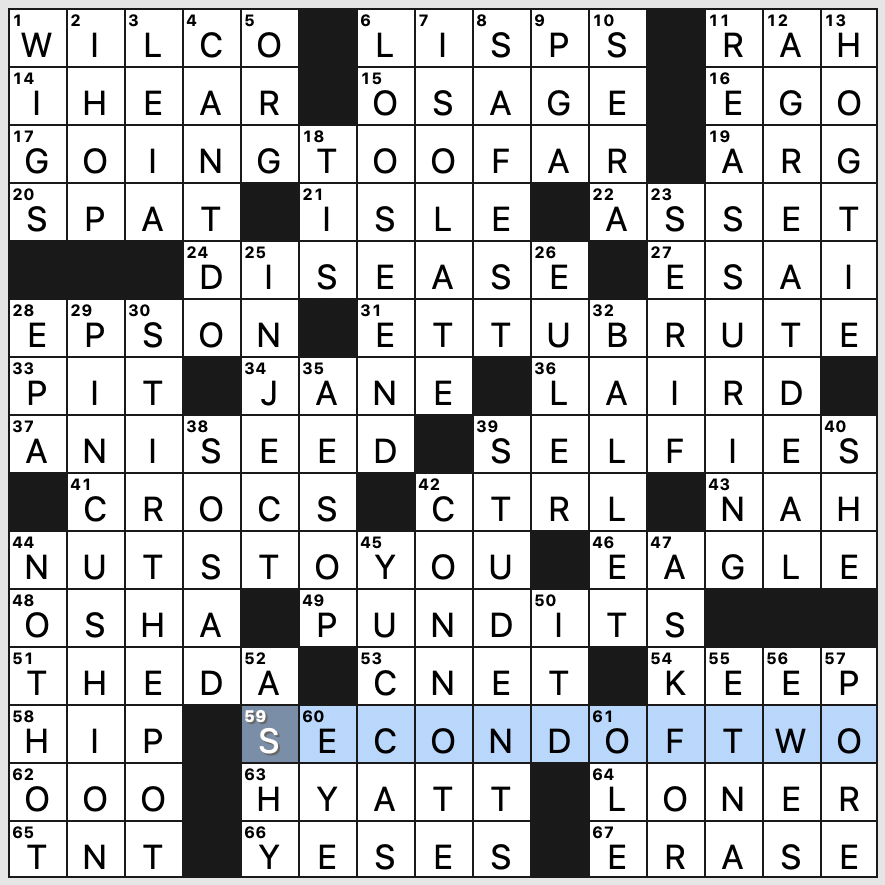 Hmm. Feels like a loose and rather light theme for a Thursday. There are any number of TOO or TO phrases that could’ve worked here. There’s even an alternative for the TU phrase in Y TU MAMA TAMBIEN, the Oscar-nominated Alfonso Cuaron film (though it’s an awkward 14 letters in length). Further, I wouldn’t have objected to an oddity like BOYZ II MEN appearing as another theme answer, just to throw a zinger into the mix. As it is this was hard to get excited about, though I love the phrase “NUTS TO YOU!”

What’s in the fill? A GREAT DEAL (which was hard to parse, by the way). STIR THE POT and PINCUSHION make for a lovely stack in the SW. LOOSE END, SELFIES, PUNDITS, HOGTIE—also nice.

A relatively simple theme for a Thursday. I’m thinking it would have been fine slotted earlier in the week. 3.25 stars. 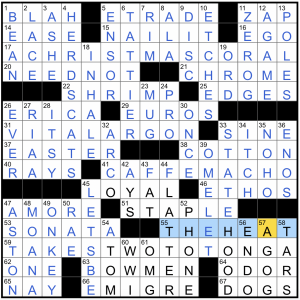 Stephen McCarthy’s grid for the Thursday NYT has a pretty straightforward twist, all things considered:

We’ve switched an A and an O in A CHRISTMAS CAROL, VITAL ORGAN, CAFFE MOCHA, and TAKES TWO TO TANGO.

The latest season of the podcast You Must Remember This is comparing and contrasting the parallel careers of Dean Martin (of “That’s AMORE” fame and Sammy Davis Jr. It’s a great listen if you’re into vintage Hollywood stories.

Elsewhere: HERDS CATS! THE HEAT! ZERO-G! This had quite the variety of crunchy fill. 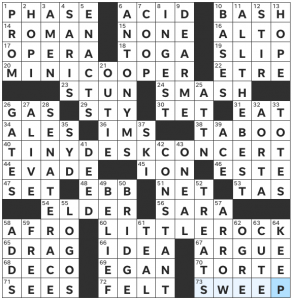 This puzzle flew by for me! My solving time was certainly helped by being able to drop in TINY DESK CONCERT with no crosses – what a fabulous grid-spanning answer (side note that if you haven’t checked out this series before, I highly highly recommend it). The concept of the puzzle connects nicely to the title, and it’s nice that in each of the theme phrases, the “small” word doesn’t connect strictly to the size of the object referenced.

Super clean fill today – I think that’s the reason I was able to solve so quickly; if there was ever an answer I was at all unsure about, I could usually flip to the crossing answer and get it. It also helped that all of the non-themed across answers were pretty short (5 letters or less) – I was able to get the longer downs of ANTONYMS, SENATE RACE, and CONSTANT without really looking at their clues because I had so many across answers filled in. My favorite non-themed answer, ALL THE BEST, I did manage to get with only the first few letters in place – maybe that’s why it was my favorite, I got to feel a nice sense of accomplishment by filling in a bunch of letters at once :)

Have a happy holiday weekend everyone!

THEME: Two word phrases/names where the letter I appears once in the first word, and then twice consecutively in the second. 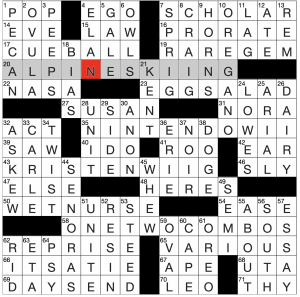 I had noticed the odd II combination in the second word quickly, and noticed the single I in the first word, but was curious as to how/if it would tie together. The title didn’t seem to be a revealer (as it sometimes is), so glad to see the last themer pull it together for a small AHA click. The themers are one-two combos if we see the I‘s as Roman numerals (or I suppose if that’s the way you write your ones in the Arabic numeral system, that works too).

Relatively quick solve for me. Grid was fine. Fun clue for IT’S A TIE [Cry after evening the score?] and UNITE [Inapt anagram of “untie”?]. 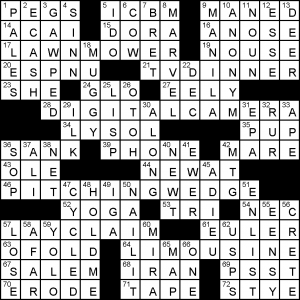 Paul Coulter’s puzzle theme today is all about the clues, which describe each answer using two homonyms. Some pairs are polysemes, some are independent. So [Blades for trimming blades] is a LAWNMOWER; [Development that ended much development] is a DIGITALCAMERA; [Club used at a club] is a PITCHING WEDGE; and [Wheels for carrying wheels] is a LIMOUSINE. There is also a short central bonus: [Bell invention with a bell], PHONE.

New to me:
[Channel that shows college games], ESPNU. I believe this will gain traction.

There are quite a number of awkward chunks of answers today: ANOSE, NEWAT, LAYCLAIM, OFOLD, NAILIT. To a varying extent, these feel incomplete and/or contrived.

Theme: Each themed answer refers to a piece of evidence that might be left by ole Father Christmas. 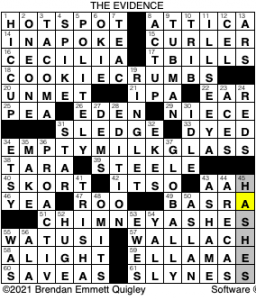 I suppose that this could also be a how-to guide for tricking your kids into thinking Santa came through, both with the script in the clues and the remains in the answers. All in all, a cute theme that was so obvious in hindsight.

Grid-wise, I enjoyed the set-up stacking EDEN and SLEDGE on top of EMPTY MILK GLASS with STEELE and IT SO underneath. It made for a nice centerpiece to the puzzle, in my option, especially with EDITION running so cleanly down the center.. Also – the two adverbs crossing these were fun with 5d [“In a refined manner”] POLITELY and 37d [“Including the whole world”] GLOBALLY.

Sorry for the day-late posting of this one! I just got home for the holidays, and it was fun but busy day that kept me off my computer.