It took me a while to make sense of this theme, even after I completely filled in the grid. There’s a theme-related NEW YEAR’S EVE at 20a, but the real revealer is TIMES SQUARE (59a, [“Crossroads of the World,” and what each box of circles is, in a way]). 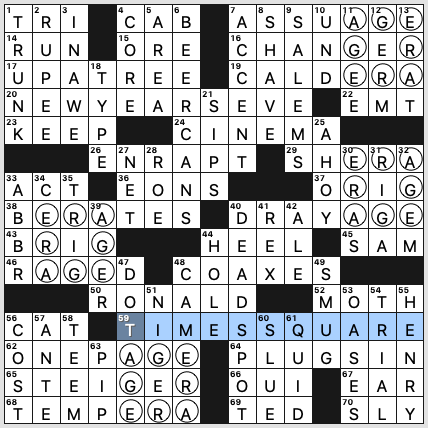 I wanted the boxes of circles to spell out something calendar-related—using all eight letters. I noticed the repetition of letters early on in the solve and that definitely helped me fill in the lower squares in the grid. But try as I might, no matter where I started in each box of circles, I couldn’t find any eight-letter words.

So I had my aha moment, but it felt pretty underwhelming. I thought this was an odd theme that was inscrutable at first and then had very little payoff. And then there’s the fact that EONS is right there near the center of the grid trying to act all inconspicuous, like it wants be in on the theme but it wasn’t invited to the party.

I did enjoy certain moments in the fill: DEAD SPOT, BEER CANS, CALDERA, UP A TREE, and PLUGS IN.  I wanted [Eggy medium] to be TEMPURA (maybe because I’m hungry), but it turned out to be TEMPERA. It wasn’t great to see all the kludgy fill around the theme entries: AGEE, AGER, A GEM, ORIG, ERAT.

This one wasn’t for me though it has its high points. Three stars. 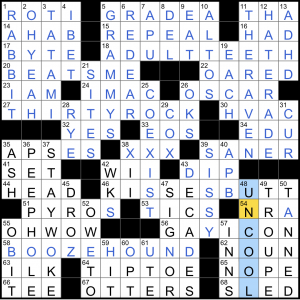 Well, here we are, the last NYT Thursday of the year.  It’s a little more straightforward than some of the more outre themes we’ve had, but it was a nice way to close things out:

Elsewhere: Loved seeing THE RAVEN and PEEPHOLE in the downs, as well as some more slang-y expressions like HATERADE and STAY WOKE.

Editor: Amanda Rafkin
Theme: The theme answers all begin with types of goats 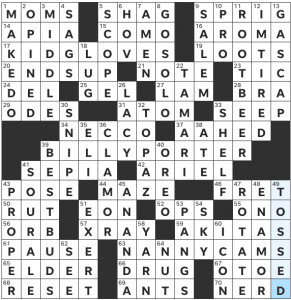 Fun theme today from Rebecca and Matthew! If you don’t know the acronym GOAT, it stands for “Greatest of all time”, but here it’s being used in reference to actual goats! I have never thought about how many words there are to describe, uh, goat life stages, as well as how they can all be used in non-goat-related terms. I’m a huge BILLY PORTER fan (I remember his Kinky Boots win well) so I appreciated seeing him in the grid. KID GLOVES took me about half of the crosses to get, but I was able to drop in NANNY CAMS without any help.

All the corners are very nicely filled – my favorite is probably the southwest corner, with BEST BUDS and SOUR ALE. This is also the second USA Today puzzle in a row with a ROOT BEER related answer; we’ll have to see if the pattern continues tomorrow. My biggest issue in the grid was filling in “nilla” rather than NECCO for 34a [Classic wafer brand], but that was fixed with the TOPAZ crossing. Oh, and I didn’t know ANANDA either, but again all the crosses are fair.

Theme: Each answer includes the number 2 as a replacement for TWO in theme answer phrases. 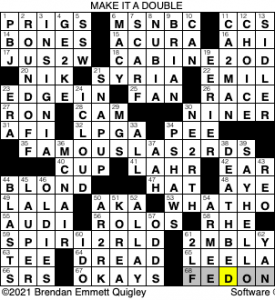 I that puzzles like this are so interesting because, honestly, I have such a hard time figuring out when numbers/rebuses are present, so it was great to crack this. My big hint was when I was so sure about 11d being CATWOMAN but not having enough letters there. I did think it interesting that both CATWOMAN and Cy TWOMBLY included the TWO as part of one word rather than the rest of the answers spanning it across TWO.

I hope y’all remembered your hat and SCARF for this holiday season and that you’ve all been warm and healthy. See ya tomorrow! 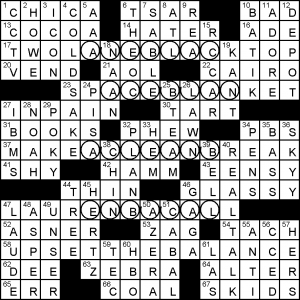 The most obvious thing when starting to solve today’s puzzle by August Miller is the lines of circles. Each septet of circles spells out BALANCE, and with five themers and 69 squares, the puzzle has gone for utter quantity. The puzzle is tied up with UPSETTHEBALANCE, with each set of circles spelling out that.

The rest of the puzzle was managed well, but without too much that was memorable. Puzzling clues for me were [Spanish gal pal], CHICA; not AMIGA – trap! And [__ music: small talk], CHIN. I thought that was fisticuffs?

THEME: The sounds of starts of three unrelated phrases collectively spell the word OUT 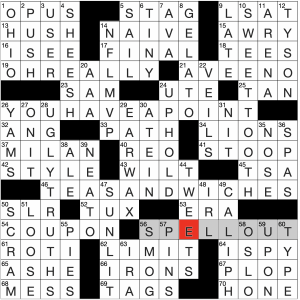 That’s about as literal as it gets! Fun revealer as I had no clue what the connection was. I wasn’t even sure where the themers were as SWEET TOOTH and UGLY TRUTHS are viable contenders. They both kinda stole the show imo.

Favorite mistake: TEAS AND WISHES is what I had as I had SARIPH (?) for the correct CALIPH.

I can’t believe I’m forgetting the term for the afternoon decadent servings of tea and sandwiches, especially popular in the Cornwall region of England. Any help? It’s on the tip of my tongue…