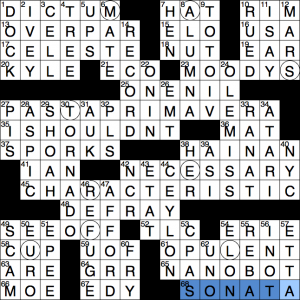 hello and welcome to episode #708 of matt gaffney’s weekly crossword contest, “Word for Word”. for this week 4 puzzle, the instructions tell us that we’re looking for a synonym for “excellent”.. what are the theme answers?

well, good question. there are some long across entries (PASTA PRIMAVERA and CHARACTERISTIC), but it turns out that only one of those is thematic. the key is the title, which suggests substituting a single word for another word. with that in mind, we notice that there are nine one-word clues, each of which has a one-word answer:

several of these jumped out at me as being unusual during the solve: that’s definitely not a normal clue for MARS (you’d expect to see something like {Roman equivalent of Ares} if you’re going to clue MARS as the god), and both cap/HAT and mug/CUP are examples of a specific example used to clue a general category of things. that generally doesn’t happen without more words in the clue like “for one” or “, say”. so i felt fairly confident that these were important.

next key insight: in all nine cases, the clue and answer are of the same length. not only that, they share exactly one letter in common in the same position: for example, truism and DICTUM both have an M as their sixth letter. circling those shared letters in the grid and reading them off from top to bottom spells MASTERFUL, which is a one-word synonym of “excellent”—albeit with no letter shared in the same place. but that’s okay, we don’t have to extract any more letters, because MASTERFUL is the answer.

i thought this meta was, indeed, excellent. the technique of comparing words of the same length to see if there is a letter in the same position is one i first encountered in a mystery hunt—in fact, i still remember that it was specifically the civilization meta-meta from the 2011 hunt, but here is a (perhaps) exhaustive list of mystery hunt puzzles that have used this extraction technique. however, i don’t remember seeing it used before in a meta crossword, and it was surprising and delightful to see it pop up here. the execution was just about ideal: there were definitely enough theme answers that it was not sheer coincidence, and inclusion of both very short and very long answers was nicely balanced.

it’s a slightly weird-looking grid built around those two 14s, but the fill was smooth, especially impressively so around the area where NECESSARY and CHARACTERISTIC were stacked on each other. for the most part, matt did have the freedom to pick either of the pair of synonyms and try it in the grid to see which worked better, and he used that freedom to good effect. really lovely construction all around. i also really enjoyed the grid entry {“That’s tempting…”} I SHOULDN’T, which i’m sure i’ve never seen in a crossword before.

that’s all from me this week. happy new year and i can’t wait to see what devilish deviousness awaits us in week 5 of december (and week 53 of 2021!).