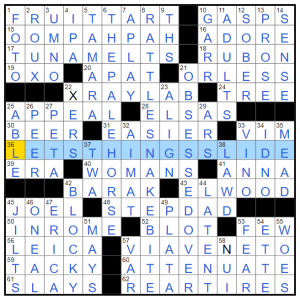 Happy New Year’s Eve Eve everyone! This was a themeless debut for Meghan, her second puzzle in the Times so far. This was a pretty slow one for me, with a lot of the clues out of my frame of reference (waltz, old movies, baseball, Israeli politics, Teri GARR, ERICA Jong)– I absolutely could not break into the SW corner. LETS THINGS SLIDE was really nice, and the combo of FRUIT TART and TUNA MELTS in the opening corner was lovely.

I did feel like a lot of the entries were just slightly off? For example, I would say that a danger to desert hikers is a rattle snake, not a RATTLE SNAKE BITE— although that’s not wrong, of course. And I have never heard the term XRAY LAB, although again… sure, I guess? There was also what felt like a mountain of short fill that wasn’t particularly smooth– the partial OR LESS,  the partial A PAT crossing the partial A PLAY, partial IN ROME, plural ELSAS, THS and ETTE both clued as suffixes, ARS, ID NO, TWA. I really don’t like LAWD in a puzzle, it seems like it’s mocking an accent?

I had to run the alphabet to get that VIA VENETO / Rapa NUI crossing.

Let me know if you found the puzzle easier than I did!

David Steinberg’s USA Today Crossword, “Out with the Old, in With the New”—Darby’s write-up

Theme: The first letter of the three theme answers spells out “NEW” while they end with (or go out with”) letters spelling out “OLD.” 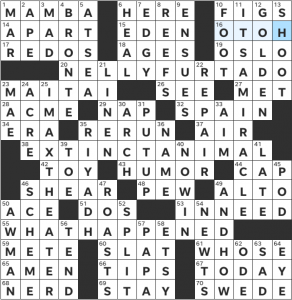 This theme is obviously perfect for the last day of 2021. (How did we get here already???) I also thought it was a creative pairing of beginning and ending letters in a set. Construction-wise, this means that David had less flexibility when moving his theme answers around because he had to keep the two 11-letter answers (NELLY FURTADO and WHAT HAPPENED) in order.

Some Friday faves to finish the year:

Here’s to next year being the end of the Covid ERA! I hope you and your fams are safe, happy, and healthy. Catch ya next year (read: Sunday)!

Emet Ozar and Matthew Stock’s Universal crossword, “You Can’t Have It Both Ways”—Jim P’s review

In retrospect I probably should have caught on to the theme with just the first theme entry, but as it was I had to spend a minute or two post-solve to sort it out.

First, the theme. Each theme answer is a familiar phrase that features somewhere within two letters that are one letter apart in the alphabet. These two letters MEET IN THE MIDDLE (58a, [Compromise, or what two letters of a phrase do to form each starred clue’s answer?]) and become that middle letter. So in the first entry for example, TUSSLES was TURTLES in the original phrase, but the R and T both become S’s. 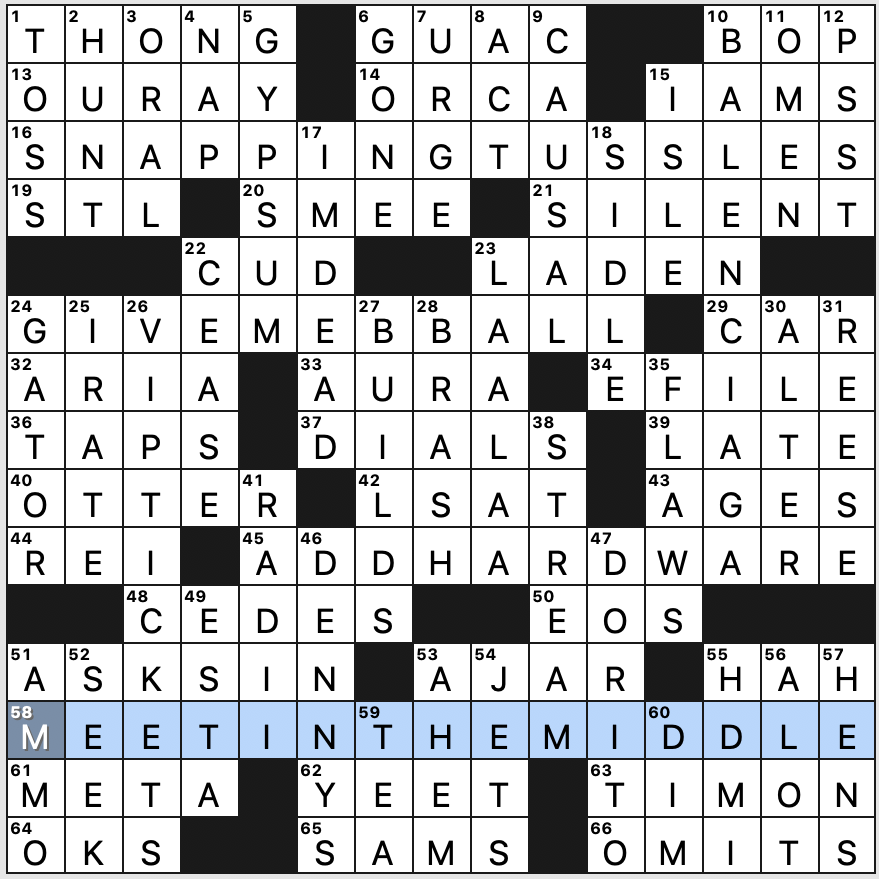 I was thrown off by a few things. First, the title, which had me thinking I would be looking for words both forwards and backwards (or one way or the other). This confused me enough that I didn’t see SNAPPING TURTLES right off the bat. Second, the other two themers are close to other actual phrases. GIVE ME B-BALL is close to GIVE ME THE BALL so I was trying to force THE to become B. Similarly, ADD HARDWARE seems like it was derived form ADWARE.

And try as I might, I just couldn’t make sense of the parenthetical hints in the clues. It didn’t help that that first entry had two extra S’s that weren’t part of the theme. And the revealer clue with the hint “two letters of a phrase” was not helpful.

Finally, I took a step back and recognized that SNAPPING TUSSLES was awfully close to SNAPPING TURTLES and that led to my aha moment. If you recognized this straightaway, good on you.

In the fill I needed every single crossing for BALENCIAGA, the luxury shoe brand I’d never heard of. Similarly, I needed a lot of help with OURAY [Uintah and ___ Reservation (tribal home in Utah)], but I have a lot more patience with Native American entries than luxury brands. 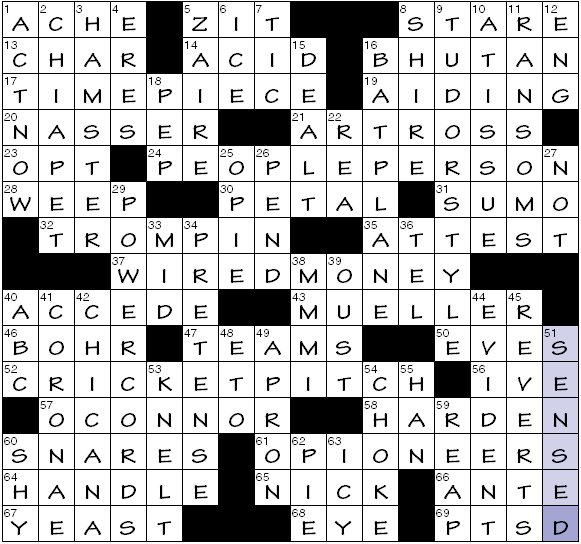 Titles of magazines as the first parts of phrases form the basis of this punning theme. It’s the sort of thing that’s been done before, but this issuance is smartly done and has a new wrinkle or two.

Note the consistency and two-word efficiency of the clues. Oh, and your eyes aren’t playing tricks; the grid is 16×15.

Solving the crossword, I found the top half easy, thanks to some intuitive leaps and some broadside box-filling. The lower half was more of a scattershot affair, but I completed  it easily enough, in the general scheme of things. 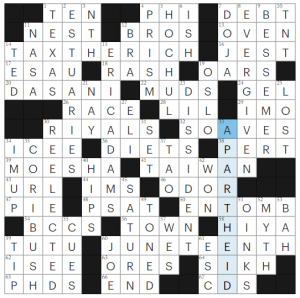 Hey folks! Today’s New Yorker puzzle is recapping this year in politics, which basically means “this year in COVID.” Who is surprised that it is a Natan Puzzle? I think I’ve never reviewed one of his New Yorker crosswords, he usually constructs for harder days of the week. I found this puzzle incredibly depressing. Thematic content below, in chronological order. If you don’t want to hear me talk about politics, maybe stop reading now? ¯\_(ツ)_/¯