·•No WSJ today because of the holiday•·

Happy New Year to those who celebrate!

Jim P here sitting in for Amy and ringing in the New Year with you. I hope you’re all happy, healthy, and approaching 2022 with positivity.

This felt like a suitably crunchy Saturday in that it kicked my butt for much too long until I fought back and wrangled it into submission. Just about right, I’d say. 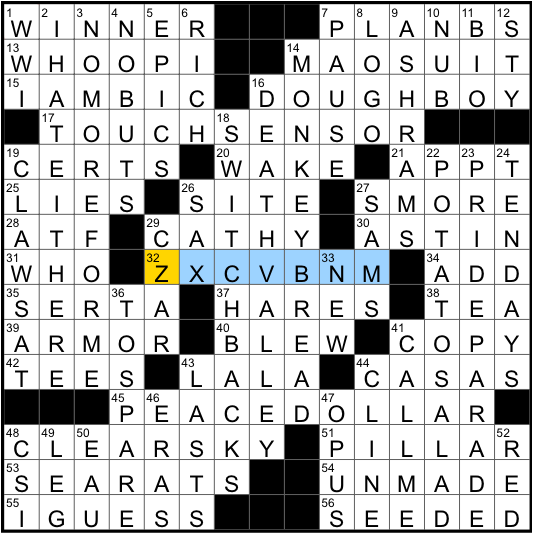 Fave entries: I HATE IT HERE and NO MORE FOR ME which make a great duo on the left side. Also, TOUCH SENSOR, POTATO SALAD, PRIDE PARADE, MONKEY BREAD, DEATH VALLEY, SWITCHBACKS (what a beautiful central stack, eh?), DOUGHBOY, and CLEAR SKY (though we usually hear that in the plural).

New to me and throwing a monkey bread wrench into my plans to finish quickly: MAO SUIT, PEACE DOLLAR, and ZXCVBNM. I needed every crossing for that last one although all I had to do was look down at my keyboard at the bottom row. Doh! I just had to laugh. QWERTYUIOP I could’ve filled in no problem. ASDFGHJKL I might have recognized. But I’ve never seen ZXCVBNM out in the wild. You? 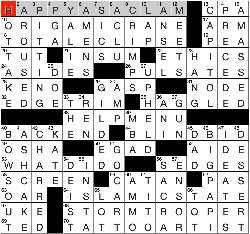 Hi, Stella here! I’m taking over from Derek as the Saturday LAT reviewer, which means now I get to talk about the thing I like best: hard themelesses. Not that this was one, as my sub-3-minute time will attest (and note that this grid, at 16×15, is slightly oversized and therefore would be expected to take more, not less, time than usual).

Not that I disliked this puzzle because it was easy. As much as I would like more themelesses of Saturday Stumper-level difficulty, I do recognize that some chiller puzzles might lead people who are scared of themeless to give them a try. The 16 width allows for those lesser-seen 12-letter entries to show up in stacks, and there are some fun ones in here like ORIGAMI CRANE, TOTAL ECLIPSE (turn around, bright eyes!), STORM TROOPER, and TATTOO ARTIST, that last boosted by the great clue of [Permanent marker?]. On the other hand, I wasn’t crazy about ISLAMIC STATE. It’s clued with reference to Iran — already a country that doesn’t do right by its women — but I don’t see how you can fill that entry in and not think of the even more repressive militant group.

The grid overall is very clean, with some fun mid-length entries like HOT TAKE and BIG PAPI. I wasn’t fooled at all by the clue for 48D [Madeleine or Napoleon], having eaten enough of both to know instantly that some kind of food reference (DESSERT, in this case) was being made. 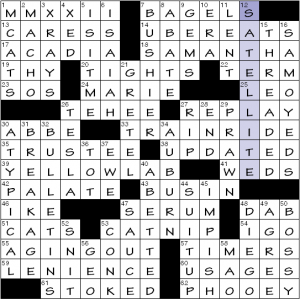 So apparently the Stumper is now part of my Fiend beat. Hope that sits well with enough of you.

Acknowledging the new year, 1-across is [Today, for the first time] MMXXII, which confounded me for quite some time and—due to its unusual letter sequences—stymied progress among the downs in that section as well. Once I figured out the Roman numeral gambit, I was able to plop in entries that had felt too tenuous on their own accords: 2d [“__ doesn’t mean mucho”] MACHO, 3d [Films reviewed by interns] X-RAYS, 4d [Struck out] XED, 5d [Question to confirm culpability] IS IT ME?

A not-too tough Stumper to start the year. I’ll take that.

A themeless treat to start the new year! 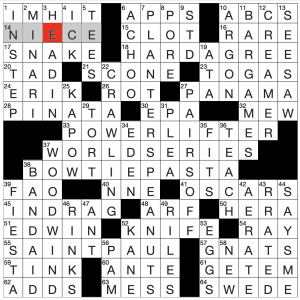 That trip stack in the middle is super nice. Yields no crap at all (every puzzle is allowed one NNE or the like1). Really like HARD AGREE too, even though I’ve never heard that (I hear HARD NO or an occasional HARD YES. I like the overly formal sounding HARD AGREE!)

New for me: MINARI (I wonder what that veggie is like…), Danity KANE, Adam Rippon.

I don’t quite understand the “,maybe” part in the clue for 14A [Sister’s daughter, maybe]. Isn’t that… definitely? I think the clue may be trying to respect gender identity, but I’m not sure. Seems to me as if gender is already identified in the clue.

Looking forward to the new themeless Saturdays! Part of me does hope they get a little more bite to them difficulty-wise. At least once in a while. My solve time on this was better than my normal Universal average. 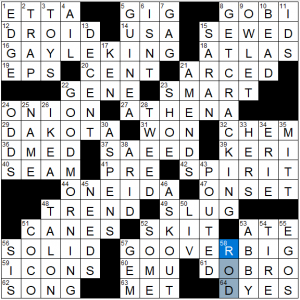 Brooke starts the year off at USA today with a pinwheel theme arrangement. Nothing too complex, theme-wise, as each entry begins and ends with “G”

Nothing’s really jumping out at me for notes, so I suppose this is a quick one. Hoping you had a happy and safe New Year’s Eve, and that it continues into 2022. I for one am looking forward to more time on crosswords after I mostly had to set them aside for the last few months.