Happy New Year! Today’s Sunday NYT puzzle asks us to flex our blending skills to figure out what might happen when we mix (anagram) various pairs of colors: 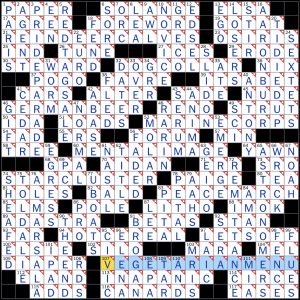 What a cool theme idea! My favorite themer has to be VEGETARIAN MENU, and my hunch is that this (or MENTAL IMAGE) was among the first themers Paolo found that sent him searching for other options. I wonder if there are any other fun combinations of colors that could be anagrammed to make a common phrase – let us know in the chat if you figure out any good ones! (Also, I don’t know about you but, while I was solving, I kept imagining what the resulting color might look like from each of the actual color combinations – some bold combos, for sure!)

One thing I enjoyed while solving was the mini LGBTQ+ sub-theme amongst some of the clues:

The only inelegance, perhaps, that I noticed in the puzzle was the dupe of AD ASTRA at 89A with ASTRONOMERS at 65D. Even still, this puzzle was great fun to solve and super smooth. What did you like about it? Let us know in the chat.

Theme: Words that can precede “gap” are found in the circled squares spanning separate, long entries. (Assuming you have the circles in your grid, that is. Solvers without circles have to rely on the awkward parenthetical hints in each clue.) 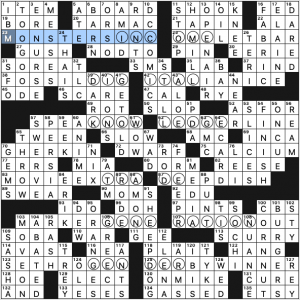 What a lovely collection of long entries. They didn’t have to be that nice. Take, for example, TRADE gap. The word TRADE can be accomplished with just the words EXTRA and DEEP. But it’s so much nicer as a solver to have juicy entries like MOVIE EXTRA and DEEP DISH. The only nit I’ll call out is that the phrase “digital gap” is far less common than the alliterative “digital divide”.

There’s plenty of sparkle to enjoy in the fill like DC COMICS, SHEEPDOG, GHERKIN, CALCIUM, CORN NUT, and BURGERS.

THEME: Phrases that have a synonym for “first” in them, clued solely as the first letter of the phrase + a Birnholzian additional message. 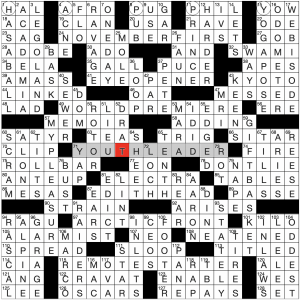 And the first letter of each of the entries in the first row spell HAPPY. So, the message, of course is HAPPY NEW YEAR!

A seemingly simple, but exceptionally tight puzzle to kick off 2022. I hadn’t looked at the letters that were circled in the first row until I was finished, so the final message was a surprise for me :) If I had stopped to examine them, I would’ve figured it out, but I was off to the races with a rare (for me) under-ten-minute solve.

I was actually surprised when Mr, Happy Pencil appeared being that I was certain I must’ve had something wrong with EDITH HEAD. I checked the crossings again and again, and decided to leave it. I didn’t even consider that it might be a person’s name (as none of the others are), but indeed, EDITH HEAD is a celebrated costume designer.

Really nice, the number of firsts being employed, and that there are exactly five entries in the first row to make HAPPY.

New for me: H.B. REESE and LEELEE Sobieski. Actually, I don’t think the latter is new to me. Pretty sure I’ve seen the name in crosswords before (perhaps WaPo even) with a helpful nudge in the clue (like “repetitive” or something).

Really enjoyed this one from Evan, and of course I’m super excited to see what he has up his sleeve for 2022.

THEME: Phrases that start with prepositions reimagined as if they are describing a place for something. 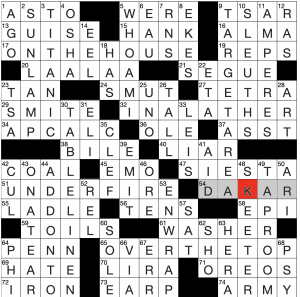 Clean, consistent, and clear. Can’t ask for much more than that. My favorite themer was OVER THE TOP.

I’m surprised that this one warrants 80 words, which is more than usual. If I’m being honest, I didn’t enjoy that fill all that much. It was mostly fine, but I had just solved another puzzle that felt very smooth, and this one in comparison lacked that smoothness (for me). Felt like a bit more crosswordese than normal.

I did, however, very much enjoy each of the themers, so that made up for any crunch in the fill.

Theme: Each theme answer includes an imperfection as well as a reference to a round of golf. 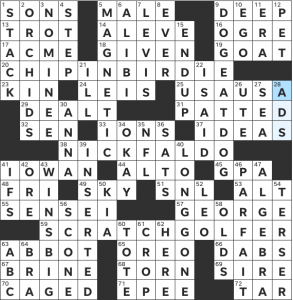 This is one of those puzzles that I should have asked my dad–an avid golfer–for help with, as I struggled for a while on NICK FALDO’s last name as well as the SCRATCH of SCRATCH GOLFER. CHIP IN BIRDIE was the easier to get, in my opinion, though I could see anyone unfamiliar with golf having to work for these themers. It’s certainly not impossible, but having that golf-specific knowledge probably makes for a much easier solve.

A couple of other things I noticed:

Overall, I enjoyed the puzzle, despite my thematic struggles.