Theme: Familiar phrases have an A added onto the final word. The revealer is A-PLUS (37a, [Superlative grade earned by six answers in this puzzle]). 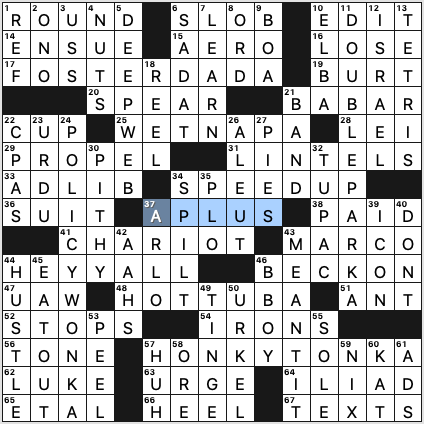 A perfectly apt and succinct revealer makes a solid basis for a theme, and the execution was enjoyable as well. Some of the entries were unexpected, so that made them more fun. I especially liked the TONKA and WONKA entries. Willy Wonka certainly did have a few policies which were clearly written down in section 37b of the contract.

Have I heard the term DEEP WEB [It’s not indexed by search engines] before? Not sure. I’ve heard “dark web,” certainly. Per Wikipedia, the DEEP WEB is all that content which is behind password protection and other forms of user registration. It includes things like online banking, web mail, and the like. “Dark web” is all that stuff which is intentionally hidden for nefarious reasons. 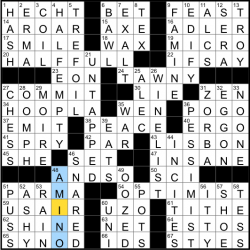 Hello there, humans! Ade stepping in today for our fearless leader, and I am hoping that finds you in the best health as can be!

Not only was the theme pretty satisfying once it was noticed, the rest of the fill is pretty smooth as well. The lovely UNTAPPED is usually referenced when talking about a person’s potential, and I don’t think I’ve seen the word in a grid that I’ve solved until today (21D: [Not being utilized, say]). I sometimes poked fun at my brother when I was in high school for being a huge fan of Will & Grace during its original run on NBC because, in my mind, it was a departure from the comedies and other shows we both liked. But he definitely would have had the last laugh knowing that I saw the ADLER clue and needed every crossing to figure that out (16A: [Grace’s last name on “Will & Grace”]). Ended up watching the show a few times with floormates who invited me over to their room a few times in college and I stood corrected within the first few minutes: real funny!! (Just don’t tell my brother that, OK? Deal!) By the way, I think I can do an imitation of Karen’s (Megan Mullaly) voice really well! (Ask me to do it if and when you see me in person next!) Definitely can’t emulate the drinking, though, so she can hold onto the WINE LIST (26D: [Sommelier’s handout]).

Was tempted to talk about the late TAWNY Kitaen in the next graph, who was the ex-wife of former major league pitcher and five-time All-Star Chuck Finley (24A: [Lion-colored]). But went in a different direction, but keeping it on the diamond…and not in a Whitesnake video!

“Sports will make you smarter” moment of the day: ALCS (11D: [Oct. contest for a pennant]) – In 1969, Major League Baseball adopted divisional play, where both the National and American Leagues would contain two divisions. The winners of the divisions would play in the round called the League Championship Series, and the first American League Championship Series featured the Baltimore Orioles (Eastern Division winners) and Minnesota Twins (Western Division winners). Baltimore swept the best-of-five series, 3-0. As it turned out, the same two teams met up in the second-ever ALCS in 1970, and again, the Orioles won in a three-game sweep. Unlike 1969, when the Orioles lost to the New York Mets in the World Series, Baltimore won the 1970 Fall Classic when it defeated the Cincinnati Reds — yes, the World Series where third baseman Brooks Robinson performed superhuman feats of athleticism like this.

Thank you so much for the time, everybody, and so hope you didn’t mind the review! Have a wonderful and safe rest of your day!

Editor: Erik Agard
Theme: Each theme answer begins with a dimension of volume 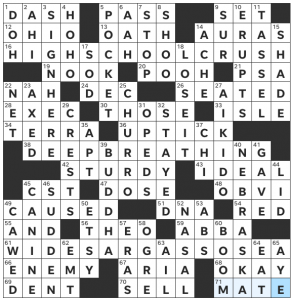 I didn’t get the theme today until after I finished solving the puzzle, but it’s a solid one. HIGH SCHOOL CRUSH and WIDE SARGASSO SEA are elegant spanners – I’ve heard of WIDE SARGASSO SEA but I didn’t know it was a Jane Eyre prequel, so I had to get most of the crosses for that one. Aptly, the puzzle felt very wide to me as I was solving, I think because of the somewhat open middle and the 15s. It’s another asymmetric grid today too, which really threw my midnight-brain off while solving.

Nothing too sticky in the fill today – oh, other than the fact that it took me forever to see SET for 9a [Word following “chess” or “box”], which was actually the final answer I filled in. I also had to get 71a [Ending for “class” or “room”] for MATE entirely off crosses – maybe I’m just bad at “words that come after ___” style clues. I love anything food related so CHURRO was probably my favorite thing in the grid today, although I love any and all Winnie the POOH references. I liked seeing the reference to ABBA’s new song in 59a [“I Still Have Faith in You” band]. It’s so rare to hear the word AXED used in reference to physical rather than metaphorical cutting as it is in 23d [Chopped down]. We did a unit on AIKIDO in my middle school PE class, so technically it’s the only martial art I’ve ever done. 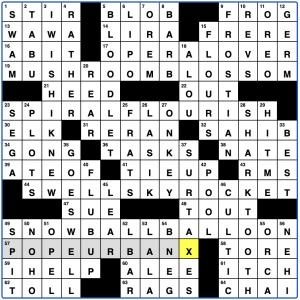 It’s the last day of the AVCX Expansion Kickstarter.  They’ve already hit their goal, but if you’re as excited about the plans they have for more puzzles and you haven’t already donated, help them get closer to all of their great stretch goals in this final push.

Byron Walden has the first puzzle of 2022 with “Bigger and Bigger”, and that title pretty well covers what’s going on underneath the hood of this puzzle:

Just like the AVCX is getting “Bigger and Bigger” this year, each of these answers consists of two words that can be used to describe something getting bigger.  SPIRAL was maybe the most sideways of these for me, but I see how it could be used in that sense.

Other nice fill: WAWA clued by the chain of convenience stores with very good hoagies rather than Gilda Radner’s Baba; OPERA LOVER (“Frasier Crane or Sideshow Bob, by musical taste”) and POPE URBAN X (“Fictional pontiff who fathered Cunégonde’s maid in ‘Candide'”) providing structural long fill in the acrosses; I WISH I KNEW and SHARK TOOTH doing the same on the downs; and BLOODLET clued as the fun to say “Phlebotomize” rather than as what Theranos was attempting to use in their testing machine.

Happy Wednesday!  Hope your 2022 is off to a great start. 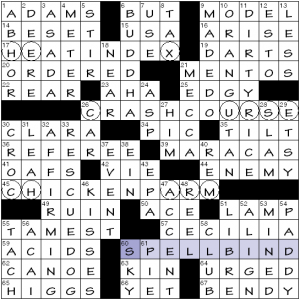 Framing the theme answers—that is to say, on either side—are letters that spell a synonym for a (magic) spell.

Again, a fine puzzle but I can’t really say I was bewitched by it. 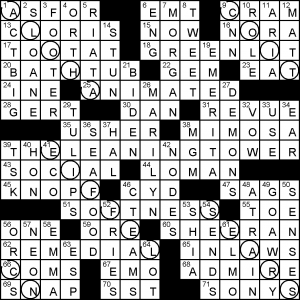 There is one theme entry, the central revealer: THELEANINGTOWER, clued as a campanile. I’m curious how familiar that word is, because I grew up in a city whose major landmark is “The Campanile”.

The rest of theme consists of “___ Tower” landmarks spelt out diagonally, but not in symmetrical locations: ALOHA, SEARS, EIFFEL, CN & something called COIT Tower, which I haven’t heard of, but is apparently in San Fran. 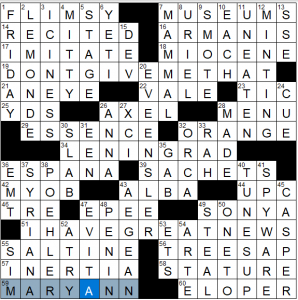 Sorry for the late post – I completely forgot what day it is.

Quicker Wednesday grid today, with DON’T GIVE ME THAT [19a “A likely story!”] and I HAVE GREAT NEWS [51a “You’ll be happy to hear this] providing the long spice. While they’re not direct opposites, I love that they’re opposing tones – it adds further to the sparkle of the conversational entries.