Theme: Famous WATERFALLS (63a, [What the circles in this puzzle hold]) are named in the circled squares which form the appropriate shape in the grid. 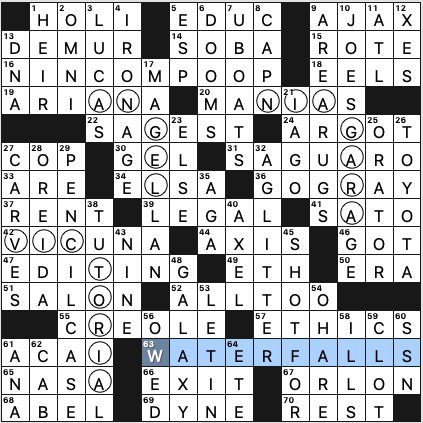 Pretty nifty execution of this theme. I can’t say I needed to rely on it to finish the solve, but it’s clean and clear and solid all around. Plus the title makes for a good bit of wordplay.

Since I barely looked at the theme, this solved like a themeless for me. Regardless of what goes on elsewhere in the grid, if you’re going to have NINCOMPOOP as a fill answer, you get a thumbs up from me. Also good: PENCIL CASE, AREA RUGS, IRON AGE, GALAXY, SAGUARO, GO GRAY, and CREOLE. I’m not a fan of AGLITTER and the weird ALL TOO, but hey…NINCOMPOOP. 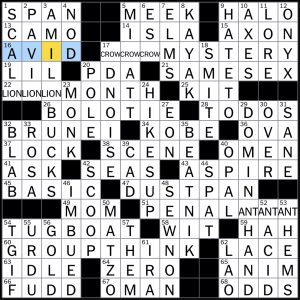 Hello 2022!  It’s a new year of Thursday NYT puzzles.  If you’ve made a resolution to do the NYT, don’t get thrown off by some of what goes down on these days – Thursdays tend to see more rebus squares (yes, you can put multiple letters in a crossword square) and other trickery, but we’ll get through this together.

Andrew Linzer has the honor of kicking off this year’s set of slightly-more-out-there-than-usual grids:

GROUPTHINK is a great description of how to parse what’s happening with each of these answers.  A group of CROWs like we have here is a MURDER (as in MURDER MYSTERY), a group of LIONs is a PRIDE (as in PRIDE MONTH), and a group of ANTs is a COLONY (as in PENAL COLONY). 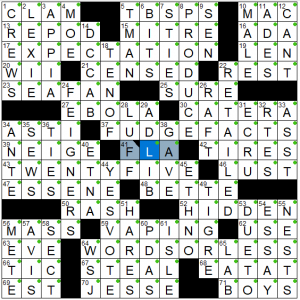 The new year of Fireball Crosswords starts off with bang, courtesy Alan Arbesfeld. The two-part revealer beginning at 43a [With 64a, constraint put on some writing contests, and read differently, on this puzzle as well] TWENTY FIVE / WORDS OR LESS.

Even with that, I still needed a key breakthrough to break into the tougher sections: this isn’t a rebus puzzle, but rather “OR” is removed from twenty-five answers; twenty-five words are “or-less”:

Let’s see … any tricky clues in that bunch? [Major league?] for T(OR)IES is quite good.

And of course, every entry in the grid itself is also a valid crossword entry. I could say it would still be an enjoyable puzzle if that weren’t the case, but I’m very glad I don’t have to. The most impressive aspect of all this to me is getting precisely 25 (or) entries into the grid. I’m not facile enough with the various constructing/coding tools to get a sense of how many options there are for this constraint.

Outside of all that theme, I quite liked [Golf foursome] at 42a for TIRES. I could have done without the Landmark Forum reference at 69a – goodness knows there are other ways to clue EST, even if the NY Sun and Fireball have gone through dozens of them by now. Kinda neat to see crossword staple D.C. CAB clued to someone other than Mr. T, but I’m not sure Bill Maher’s role is *that* significant. LUFF is a neat word.

Jenni will be back for the Fireball next week. Happy Thursday!

Theme: Each theme answer replaces a day of the week in a common phrase with a bone. 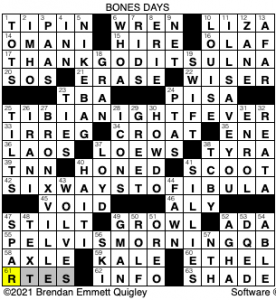 It took me a minute to start putting the bones in the answers, and I was completely thrown at first at how SATURDAY NIGHT FEVER could not fit, especially once I filled in FEVER on the crosses. I didn’t know what a MONDAY MORNING QB was (it’s someone who criticizes after the fact), but got there off of that bottom right corner, which was the last bit of the puzzle to fall into place for me.

The top left corner was also especially tough, considering the number of names crossing one another. I knew 10d [“Literature Nobelist Glück”] was LOUISE and could reasonably fill in 16a [“Chancellor Scholz”] as OLAF once I got the L from I’LL SAVE YOU and the F from AFAR. I had no idea, though, on 12d [“Billy of ‘MacGruber’”] to save me with 10a [“YouTube star Koshy”], so it took a bit of plain guessing to figure out the LIZA/ZANE cross.

Overall, not my favorite BEQ theme, even though I love the subtle reference to Noodle the Pug and his bones/no bones days. I hope y’all are having whichever type of day you need!

Editor: Erik Agard
Theme: Each theme answer ends with something that can be opened in a web browser 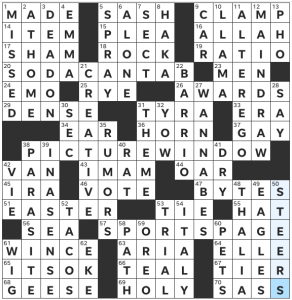 As a software engineer this theme immediately piqued my interest! TAB, WINDOW, and PAGE certainly all fit the bill of being things that can be opened in a web browser. It took me a while to see the theme because I kept wanting something related to “pop top” for SODA CAN TAB, so I ended up having to abandon the top part of the puzzle for a while and come back to it. It might have been interesting to push the meanings of the words even farther from their internet relations – something like maybe “Elliot Page” over SPORTS PAGE? – but that’s a minor nitpick on a ver solid theme. 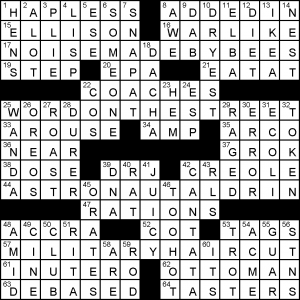 THEME: The word MAD is spelled out every other letter in common phrases. 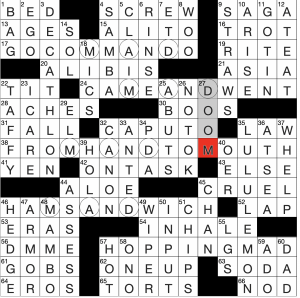 Fun theme! Great title. Perfect revealer. Solid phrases (FROM HAND TO MOUTH was a bit of a downer).

One nit for the GO COMMANDO entry is that it’s not necessary to hop all the letters… there’s another M in between the M and the A. That’s a bit fussy though. I enjoyed that themer the most.

The big problem: This is a circle dependent puzzle and Universal is unable to publish circles. Asking solvers to count three letters and mentally circle them is, in my opinion, silly. It’s a big turn-off to newer solvers, as I have witnessed on so many occasions. So having a difficult time understanding why Universal doesn’t update their software. The webapp experience is pretty terrible.

Great fill in this one with fun clues! Though [It’s made in the morning] for BED is not accurate for me, who wakes up on a daily basis and says “Oh shit!” and runs around and *somehow* manages to get to work on time still. Bed making is not in the morning routine. Total afternoon thing for me. I had DEW, which made sense to me :)

Not sure if I’m ready to accept DM ME as crossword fill. Looks pretty ugly.