Good evening folks! A Robyn Puzzle… I said it best in a tweet. 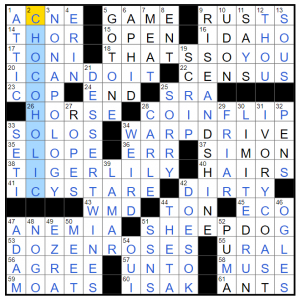 I filled in the entire left side in minutes (which is surprising for me, Fridays frequently take me longer than thirty minutes). I got the perfect beautiful little stack of CHOCOHOLIC and NONAPOLOGY off of just 1-across which filled me with an embarrassing amount of adrenaline. (I’ve been isolating for six days now, and excitement is hard to come by.) Then I absolutely ground to a halt, filled in nothing for about seven minutes, and ultimately had to “check puzzle” once to break into the right side.

I’ll use the Oreo method (hehehe) for today’s review.

Clues that I liked:

Things I didn’t like: SRA, WMD, TON clued as a French word rather than an English one, the clue [Friendly introduction?] for ECO, which is a specific type of crossword wordplay (crosswordplay???) that I dislike because I think it alienates new solvers and isn’t even that clever, EZRA being clued as a Bible reference… I feel like it’s always this, or that one poet…. Give me some Ezra Miller please!!

I should have pointed this out earlier, but there’s no reason for TIGER LILY to be clued as the racist caricature that was in the Peter Pan movie.

I hope everyone has a chill Friday and a restful weekend! New York squad please stay safe, I keep getting text messages from my energy company about a snow storm. 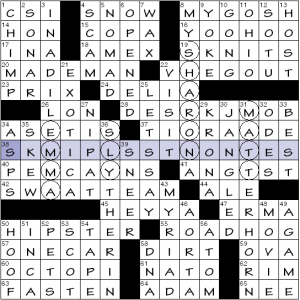 I had a stutter or two but figured out the theme quite early on (40-across [*Sandie ingredients] PECANS) is the entry that helped the most for that).

There are four strings of circled letters running down in the grid, and it turns out that they aren’t counted for the across entries that would normally be intersecting them. The grid-spanning revealer—touching all four of those vertical elements!—elucidates: 38a [*Makes splashes at the shore … and what each answer to a starred clue does] SK○IP○S ST○ON○ES (skips stones).

You see, the circled letters are names of famous people with the surname STONE: Emma, Sly, Sharon, and Matt. (IN A DILEMMA, SLYTHERIN, “MY SHARONA“, MATTERHORN. Tiny ding for SHARON and SHARONA being essentially the same, but what’re ya gonna do?

The answers to the asterisked clues look a little weird as they’re going in the grid, until the solver understands that the circled letters should be ignored for the acrosses. There isn’t anything tricky or a particularly interesting about those entries, so I see no point in regurgitating them here.

A very clever and well-executed theme; much more engaging than I was expecting.

It speaks to the universality of the pastime of skipping stones that there are dozens of regional names for it, from “ducks and drakes” and “making little frogs” to “making the dog lick” and “the way a dragonfly skips across the water” to “throwing a sandwich”.

Okay, let’s do the tour.

Theme: POCKET PROTECTOR (64a, [Stereotypical nerd accessory, or a punny hint to the football positions at the ends of 17-, 28- and 47-Across]). The other phrases end in an offensive line position in American football. 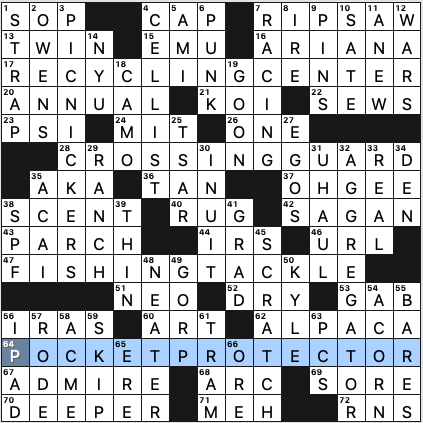 Whatever the case, the theme works nicely and I like its punniness (including the title) and choice of theme entries.

PICNICKERS is a fun entry to have in the fill. AGGREGATOR isn’t quite as fun, but it has a modern feel with its clue [Site with content from many sites]. RIPSAW, CELLIST, ALPACA, and “OH GEE” are also nice.

Theme: The first word in each theme answer can precede POWER. 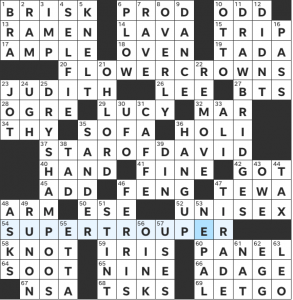 When I first finished this puzzle, I embarrassingly dug waaaay too deeply into the theme being like “is this a series of steps? Like a crown went on David and then he became super?” Not my proudest moment, but Sally’s blog snapped me back to reality. Now that my mental processor is somewhat bug free, I thought that this was a fun theme. “Series” in the title is what threw me off the scent a bit, I think.

This also felt like such a fresh and contemporary grid to me, from 4d [“Photo taken with a front-facing camera”] SELFIE, the 27a [“‘Butter’ group”] (which is also a hysterical clue) BTS, and 25d’s [“No-water-needed hair products”] DRY SHAMPOO. The latter of these paired very well with 11d [“Structures that cross moats”] DRAW BRIDGES. There was something incredibly satisfying about both of these answers starting with DR for some reason.

A long one from me today, clearly, so thanks for holding on! Overall, a POWER puzzle from Mark and Brooke. 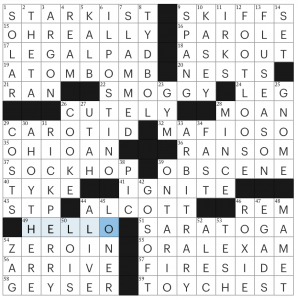 Hey it’s me, back at it again, flailing my way through a Patrick Berry puzzle with little to no idea what’s going on. I was already not thrilled to uncover ATOM BOMB and would have stopped solving when I got to RICK PERRY (whimsical clue be damned) but I had a review to write, so fought til the end. Had to guess letters for STARKIST crossing KALB crossing TYDBOL.

I liked OH REALLY, FOOTLOOSE, AHOY THERE, and FIRESIDE. 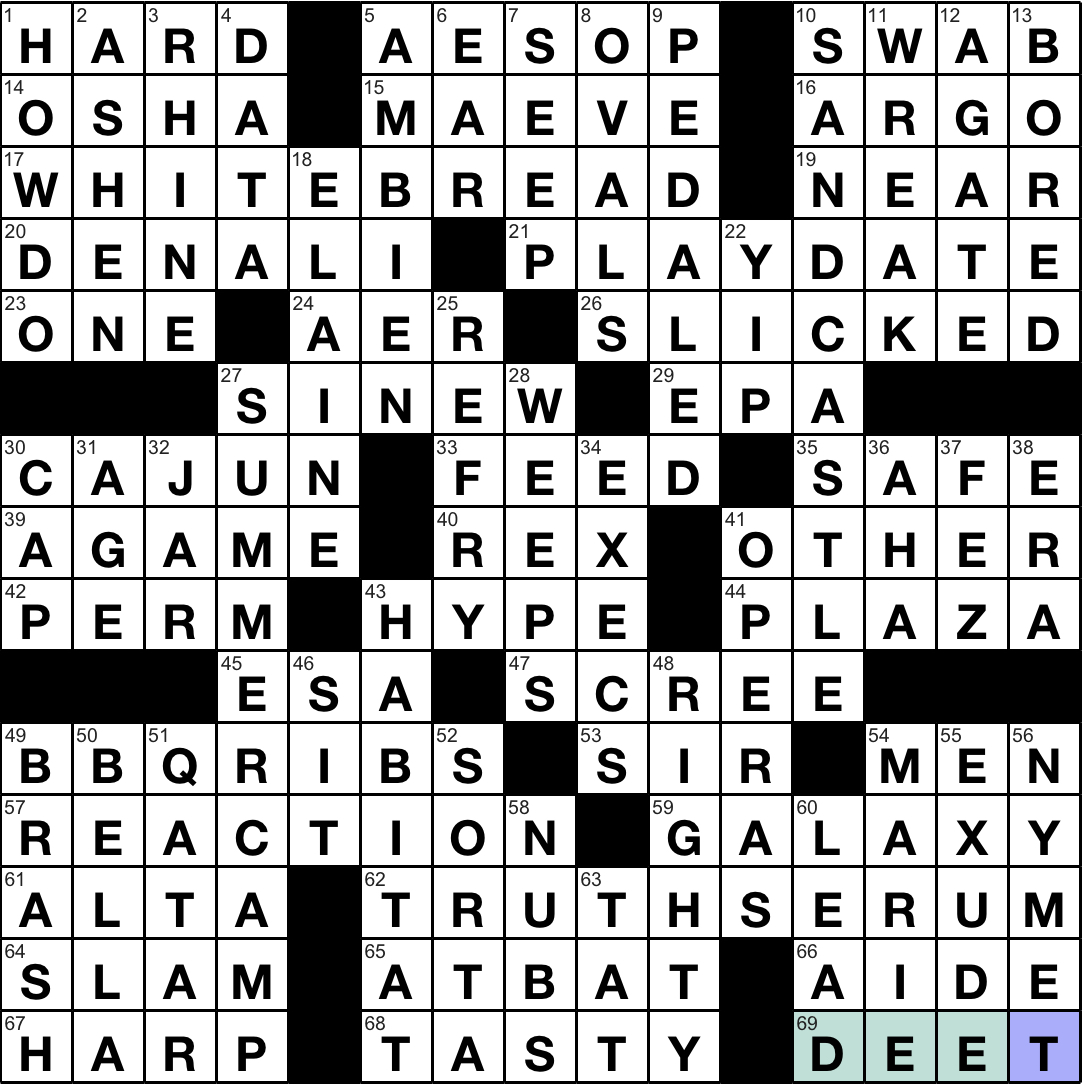 I very much enjoyed the solve, and the cluing of this puzzle. I didn’t quite see the reason behind these particularly choices, as I don’t see a connection between Betty WHITE, George SAND, Donna SUMMER, and Sojourner TRUTH, but that didn’t take away from the enjoyment of the puzzle. I liked the placement of these themed entries that utilized Acrosses and Downs, as it made for an interesting grid that was fun to weave through.

Here’s ONE from A Chorus Line