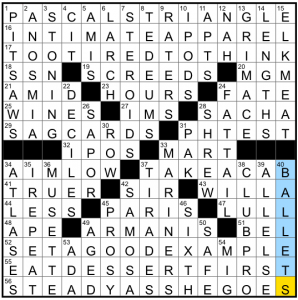 Hey folks, Sophia here covering the Saturday NYT. I’ve blogged two of Freddie’s previous puzzles the last few months, but both were Mondays so this is a nice change of pace!

I’m actually shocked I solved this puzzle as quickly as I did, given that on my first pass of the acrosses I had about three answers. Luckily, one of those was PASCAL’S TRIANGLE, or I never would have had a hope at the top section. The first half of the downs was pretty rough too, but I managed to get enough in the bottom half to see the three bottom 15’s, clawed my way up the right side, eventually got the last two 15’s from their back halves, and finished on the top left (PITSAWS/ANOSMIA/CIT were all total unknowns for me).

This puzzle has a super low black square count, only 21. By my count (thanks xwordinfo for the stats), only 12 NYT puzzles ever have had lower than that. In any construction that ambitious, there are bound to be some gluey bits, which this puzzle definitely has – triple stacks of 15 are often love-them-or-hate-them in this way, because if you don’t connect as a solver to the marquee answers, the puzzles can feel very difficult without much payoff. For me, the six 15’s are all solid (SET A GOOD EXAMPLE is a good example (haha) of a fine phrase that doesn’t really sparkle, although the misdirect in [Do some modeling] is nice) to excellent (TOO TIRED TO THINK, EAT DESSERT FIRST). I’m not a big triple stack girl myself as I think the tradeoff with the rest of the fill quality can sometimes be too strong (honestly I feel that way about most ultra-low word count puzzles regardless of grid shape), but I thought the execution here was pretty well done. I wish some of the down answers had been a little more interesting, though – looking back over the puzzle now, there aren’t many that stand out to me as memorable. Well, except for ELK MEAT, but that’s mostly because I came very close to putting in “eel meat”.

Looks like a debut for Molly Bratton! Is this a husband/wife pair? Congrats! 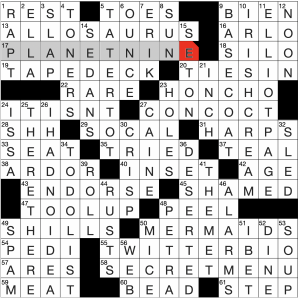 My favorite of those entries were the ones I hadn’t heard of- ALLOSAURUS, PLANET NINE, and ELLIOT PAGE (though I suppose I saw him in Juno). They gave the puzzle a bit of a challenge. Otherwise, I found it very easy. Fun, but not much harder than a themed Universal.

Actually, before I say that too much, if you look solution grid I indeed have a Natick-y mistake (for me). As I didn’t know PLANET NINE and SAT ON is a viable option for the clue [Placed atop] I accepted PLANET NINA as an answer. In hindsight, it’s awfully silly sounding (no offense to the Ninas of the world), but at the time I was happy that I had new awareness of the previously-foreign-to-me PLANET NINA. 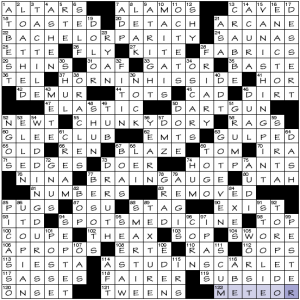 The ‘letter carriers’ of the title refers to the clues, each of which contains a homophone for a letter of the alphabet, plus an instruction—similar to those in cryptic crosswords—as to whether it should be added to or removed from the answer, after which wackiness ensues.

I’ll italicize and underline or bracket the relevant parts.

I liked this theme, it’s a bit different and it’s done well.

And on that cheery note, ciao. 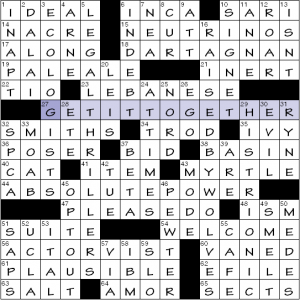 Yep, this one crushed me. Plenty of stumpery clues, oblique and abstract, the kind that make it difficult to get toeholds in the grid, at least with any sort of confidence.

This despite knowing some sizable entries in the northeast: 18a [Fictional foe of Richelieu] had to be D’ARTAGNAN, since ATHOS, PORTHOS, and ARAMIS were all too short. The G led me to SIGNET for 10d [Small seal]. I then took a flyer on 11d [Second-in-line to the Windsor throne, c. 1955] ANNE. 13d was a fill-in-the-blank that was basically just a grammar quiz: 13d [“It __ just one of your holiday games” (Eliot on naming cats)] ISN’T. And >bang!< with the IN–S in place, 15a [Supernova by-products] had to be NEUTRINOS.

But then I pretty much stalled and had to scrabble across desultory entries throughout the grid and gradually, very gradually, stitch them together into a whole.

A real sense of accomplishment in completing this one. 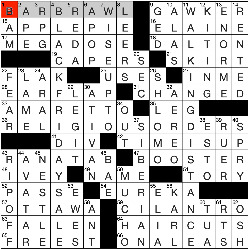 That’s twice in a row I’ve come in under 3 minutes on Saturday for LAT. Don’t go soft on me, Rich Norris, please!

This is an interesting construction with two vertical 15s crossing the center 15. I especially liked that 11D, WALKING DISTANCE, an entry that could go toward boring, was clued in a way that made me nod emphatically [Everywhere, “if you have the time”: Steven Wright].

47A, BOOSTER, feels mighty timely right now (I got mine on Christmas Eve, so I’ve just hit the two-week mark). On the other hand, 4D, BLACK FRIDAY SALE, seems like it would’ve made more sense a few weeks ago.

59A CILANTRO [Salsa roja ingredient] was a bit of trickery that kept my solving time from being even quicker, since if you have ???AN?RO filled in, it’s very easy to put in HABANERO and be wrong. Ask me how I know.

13D ENORME made me think of Enorma Jean, a drag queen who was recently on Drag Race Italia. She’s pretty fabulous, even if she did have some emotionally messy moments on the show.

Overall the fill was neither remarkable for its highs or lows, with the exception of the SE corner, which has TUA, RTS, and OSH right in a row. At least if you’re going to have TUA, how about throwing us classical music lovers a bone with [“Pleni sunt caeli et terra gloria ___”]?