Was today’s puzzle sponsored by Apple? I was surprised to see no iPad references in this grid, but the constructor otherwise dropped quite a few apples in this grid: 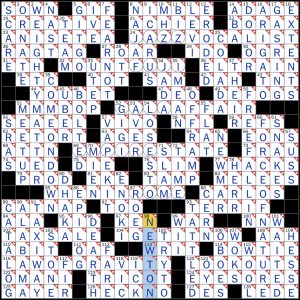 24A: JAZZ VOCALIST [Carmen McRae or Anita O’Day, notably] – JAZZ apple
32A: MOUNT FUJI [Endpoint of a Shinto pilgrimage] – FUJI apple
52A: GALA AFFAIR [Fete] – GALA apple
69A: EMPIRE STATE [Birthplace of five U.S. presidents, with “the”] – EMPIRE apple
85A: WHEN IN ROME [Start of some conventional wisdom] – ROME apple

98D: NEWTON [Who was famously hit over the head with inspiration?]
116A: LAW OF GRAVITY [Scientific contribution from 98-Down, discovered in a manner suggested by this puzzle’s theme]

I mostly liked the execution of these different apple types falling down onto NEWTON, demonstrating the LAW OF GRAVITY. I think I would have liked it a tad better (and maybe the constructor tried this and it just wasn’t possible) if the apple types were vertical, not horizontal, to more fully animate the idea of the apples falling down onto NEWTON. Even still, an interesting visual theme.

NEWTON and the LAW OF GRAVITY

Bonus theme-adjacent entries (I think?):
1A: SOWN [Disseminated] – Calling Johnny Appleseed!
14A: ADAGE [“Forbidden fruit is the sweetest,” e.g.] – And, specifically, those apples from the Garden of Eden…
104A: I GET IT NOW [“Eureka!”] – It was a wonderful touch to have this crossing NEWTON, given the theme!
3D: WEIGHTY MATTER [It’s nothing to joke about] – I think this is theme-related, at least!
60D: FORCE OF NATURE [Unforgettable, unstoppable sort] – This one, too?
88D: CERN [Lab where the Higgs boson particle was discovered] – The Higgs boson particle gives mass to many types of particles, and we know how objects with mass interact with gravity!

One last shout out – I loved seeing the clue for THEIR at 37D: [Nonbinary possessive].  I’m so glad to see the singular they / their working its way back into the language. Shakespeare would be proud!

What did you enjoy about this puzzle?  Let us know in the comments section.  In the meantime, be well and stay safe!

The revealer is LAY DOWN THE LAW (60d, [Make it clear what’s allowed, and a hint to filling in four answers in this puzzle]). Taken with the title, “Side Order,” we see that the circled squares spell out words that are synonyms of “law” and/or “order” and are “laid down” to the “side” of the Down entries (i.e. in the Across direction) from which they started. And of course they are still a part of the crossing Across answers.

This is assuming you have circles in your grid. If you had to rely on the parenthetical counting tips in the clues and still solved the puzzle, more power to you. I for one would not want to be counting squares in a Sunday-sized grid. 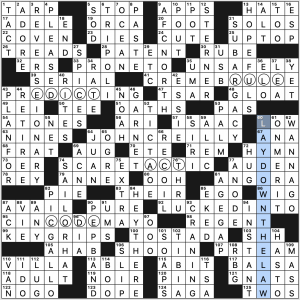 The “law” words are:

This was complex enough for me just to write up. I bet it was a bear to construct. And yet nearly all the entries are lovely. Only PREDICTING is run-of-the-mill; the rest are quite nice. An impressively executed theme. 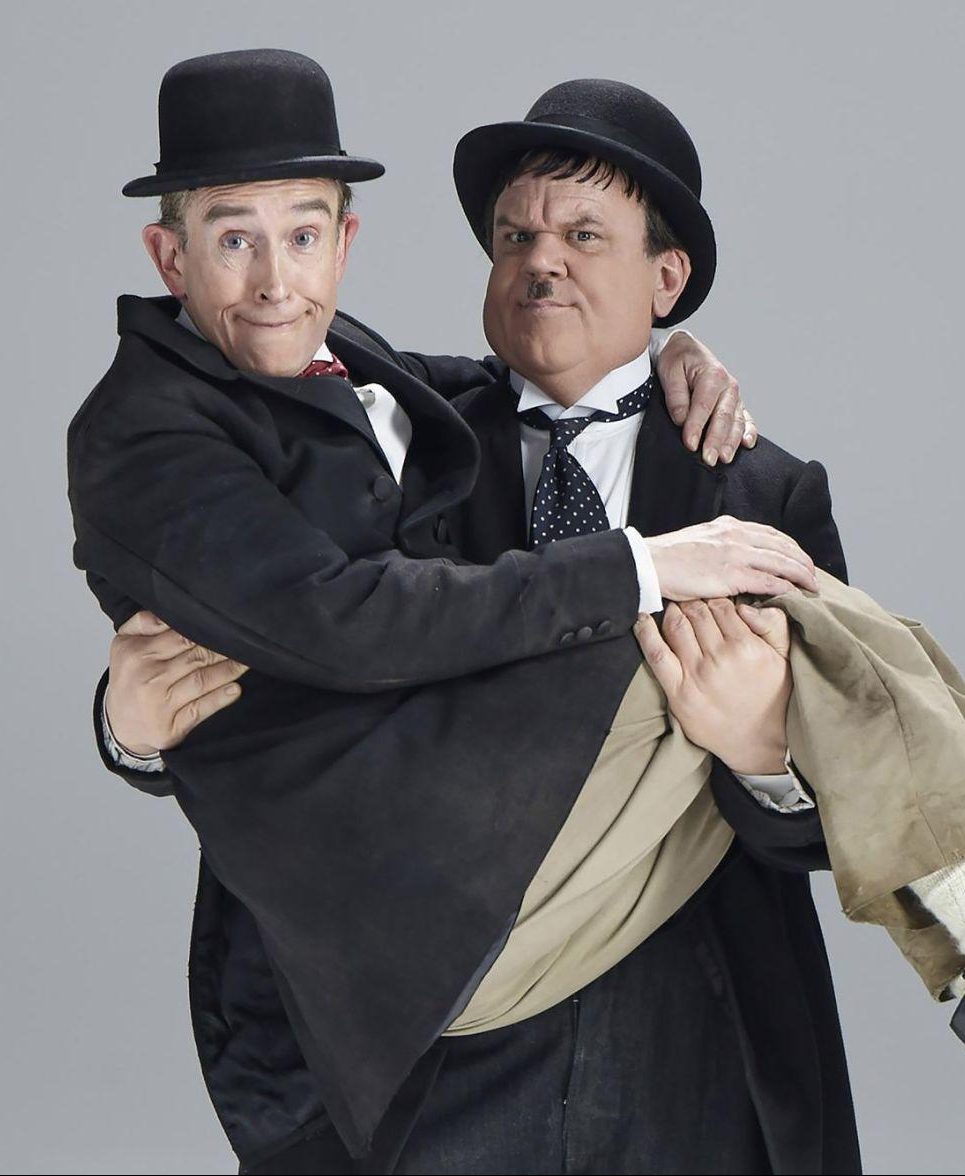 And the fill ain’t half bad either. I liked LUCKED INTO, KEY GRIPS, PEP BAND, HOPEFULS, SAILOR HAT, TOSTADA, TRIPOLI, and “HEY THERE!” I also liked JOHN C. REILLY [“Stan & Ollie” co-star], but I really wanted the answer to be STEVE COOGAN who did a wonderful job playing Stan to Reilly’s Ollie. (I’ve been a fan of Steve Coogan’s character Alan Partridge since I lived in England. “Aha!”)

An impressively constructed grid with plenty of fun fill. 3.75 stars.

THEME: Names of fictional characters are changed by a letter addition, creating wackiness 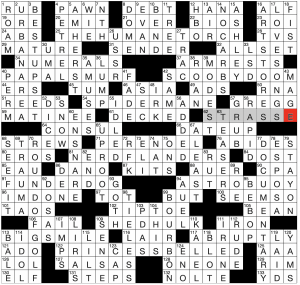 And the added letters spell our meta answer, ELMER FUDD.

That’s about as easy as you can get for a meta puzzle. So I hope the never-meta grumblers are kept at bay, especially since the puzzle works just fine without any meta answer at all. In fact, the resulting alterations are almost all winners. Great visuals. I especially love SCOOBY DOOM, but I’m biased as I have two Great Danes, both of whom seem to be leading me to my inevitable self-destruction (in the most lovable way possible). The only one that felt a little off was PRINCESS BELLED, first because I don’t ever recall of anyone referring to her with the royal title in front of her name (I can’t think of her as anything other than “Belle”), and second because BELLED is tough to swallow as an adjective.

I’m wondering if there is a particular reason ELMER FUDD was the meta answer, or if that’s just how the letters fell best. There could be a layer that, perhaps, I am missing.

The puzzle itself I found much harder than the meta, stumbling over many spots and names I did not know. As always with WaPo, it worked itself out due to fair crossings, but my solve wasn’t a pretty sight to behold. Names and other entries that tripped me up were HANA Mandlikova (although I should have known that), GREGG Berhalter, CONSUL, PETREL, Leopold AUER, EVAN Winter, ASHLEY Feinberg, DOSAS, Jean AUEL, IRENE Ryan, and KALEL (it’s in the back of my brain but couldn’t summon it at the time).

Other tricky spots for me were LUMP [Like it or ___ it] as I don’t recall hearing that phrase (I thought “leave” or “love) which made TUM (TUM) unusually difficult for me. Also I had MAGI for MAGE making STRASSI for [Hamburger’s “street”], so I figured there was a road called “STRASSI Street” somewhere in the U.S. that was famous for its hamburgers. Duh. It’s the correct entry actually makes a great clue/answer pair. STRASSE is how one would say “Street” in German, and Hamburger, or course, is a German city.

I remember thinking it had a modern feel for much of it with [“i’m dead”] for LOL and a few others which I can’t seem to remember now.

All in all a good time, featuring our favorite character on TIPTOE (“Shhhh! He’s huntin’ wabbits!”) ELMER FUDD. 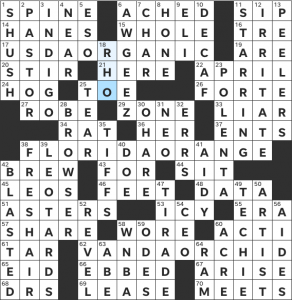 I was able to get the first two of these pretty easily, and because of that, I figured out the theme as I was solving. This made it much easier to get VANDA ORCHID, which I was not familiar with at all, but the backwards ROAD helped me get ORCHID, causing the rest of the answer to tumble into place on the crosses. Generally, I enjoy backward/anagram-based themes, so this was a nice treat for me today.

I thought that this grid was interesting because if you look at where 51a [“Daisy relatives”] ASTERS meets the black squares beneath and adjacent to the S, you can see where Zhouqin deviated from symmetry. There’s a full L up by 26a [“Strong suit”] FORTE, but the S breaks into it in ASTERS. It’s so close, which I thought was interesting but opts to remain asymmetric.

This was a great Sunday with a fresh theme and fun answers. Before I go on too long, I’ll SHUSH, but have a good week! 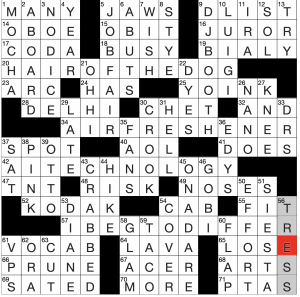 You know what I like best of this fantastic little puzzle? No revealer. HAIRCUT would be the obvious one, but it’s nowhere to be seen. Instead we have the title, Barbershop Quartet, and four themers that are seemingly unrelated. It allows for your own AHA moment without the too-often-obligatory push.

Really enjoyed this one 4.25 stars.