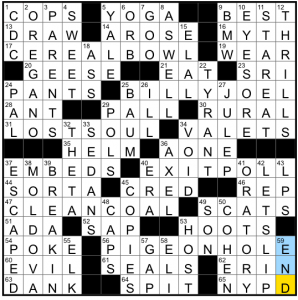 Lynn is one of a few constructors regularly heralded as “The Queen of Mondays”, and this type of puzzle is exactly why. Extremely solid theme, gridwork, and clueing all around – not much more to say here (but y’all have been reading my write ups for the past six months, you know I always have more to say).

My favorite thing about this puzzle is how satisfying it is to say all the theme answers aloud together. Try it! The different spellings of the theme sound give the puzzle the extra layer of interest that it needs, else I would have said the them was too simple for the New York Times. I’ve seen a lot of aspiring constructors ask how many letters long their theme answers need to be. I always want to say “as long as the theme requires”, and I think that concept is shown clearly in today’s puzzle. None of the theme answers here are very long (LOST SOUL and EXIT POLL are only 8 letters each), but since it’s easy to tell what words follow the pattern and are thus thematic, I don’t mind it at all.  Plus, since there are six of them, the puzzle doesn’t feel lacking in theme material.

Lynn picked a really nice layout that allows there to be a lot of 7 letter down answers, but keeps most of them from crossing more than a single theme answer (well, besides those in the NW and SE). Some of these I found exciting – EYESORE, LET SLIP, and PARENTS as clued all really worked for me – while others (looking at you, STARE AT) felt pretty neutral to me. I also liked the references to Paul Rudd and Alex Trebek in the clues for ANT and HOST respectively.

The grid overall is super smooth, and my one complaint is that there a few too many COPS related references here for my personal taste. Actually, one more minor complaint: This is the second puzzle in a row that I’ve written about that clued ADA as an acronym rather that a name, and today we also get ERIN as a reference to Ireland rather than a person. I’m all for cutting down proper noun references on easier days of the week, but it really feels like women’s names bear the brunt of this choice. In fact, the only non-MYTHological woman mentioned in either the grid or the clues today is Kate Middleton, clued in reference to her SONs.

I don’t see a single cross that might mess people up unless they happened to not know either BAUM or BILLY JOEL, but both of those are incredibly well known across different swaths of folks, so I’d bet most everyone knows one of them if not both. This is the quality I expect when I solve a Lempel puzzle, and I certainly was not let down today!

Theme: Words that can precede “road” are found in the circled squares running backwards. The revealer is BACKROADS (58a, [They’re off the beaten path, and a hint to the circled letters]). 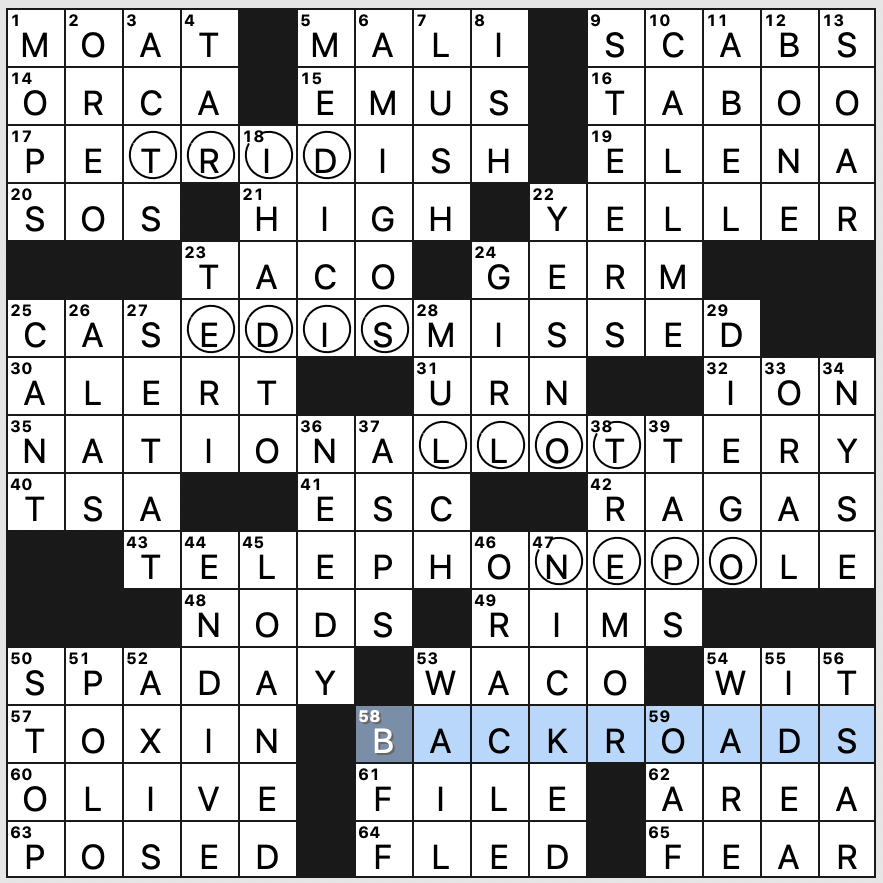 A fine example of this theme type. By the second entry I saw the backward words. By the third entry I’d figured out they preceded “road.” And by the fourth entry, I guessed what the revealer would be. It was nice to have that confirmation once I got to it.

While the fill doesn’t boast any long, sparkly answers, it did feel smooth and clean. I liked “I HAD TO,” MEDICI, Blondie song “CALL ME,” and SPA DAY.

Clue of note: 54a. [It may be dry or sparkling]. WIT. I must have filled this in from the crosses, because I got hung up trying to think of three-letter beverages that fit the clue.

A Monday-smooth grid and a straightforward theme with just a little twist. 3.5 stars. 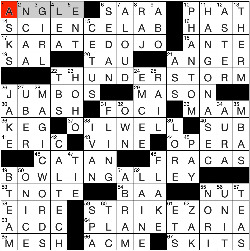 Here’s a theme that’s slightly-less-than-straightforward enough that I think it might have been more appropriate for Tuesday than Monday. A trip down to the revealer at 59A [Home plate ump’s concern … or what the answer to each starred clue can be?] gives us STRIKE ZONE, since in some sense all of the theme entries are places where strikes of some kind happen.

So, this certainly isn’t quite as straightforward as, say, “theme answers where the first word in each entry can be preceded by the same word to make another phrase,” and that 17A, 37A, and 49A are physical ZONES whereas I wouldn’t call a THUNDERSTORM that, makes this a bit less straightforward than I personally would choose for Monday. Couple that with needing to star the theme clues because there are four 10-letter entries in the grid that are not themers, and I would push this to Tuesday. Not the constructor’s fault, of course.

CETUS was definitely out of place compared to the difficulty of the vocab in the rest of the grid. I enjoyed SCIENCE LAB, MAGIC WORDS, PHANTOM (though I would’ve liked it better without the cross-reference in the clue), and FRACAS, which is a fun word to say out loud. 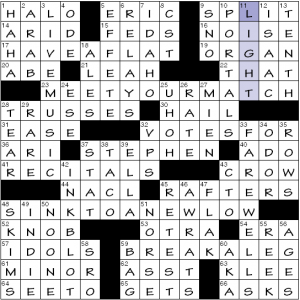 Verbose by necessity. It’s fine as a theme, but a bit dry for my taste. 14a [Like a desert] ARID. However, I can see this as a great entry crossword for new solvers, as it’s engaging enough and is well-made. 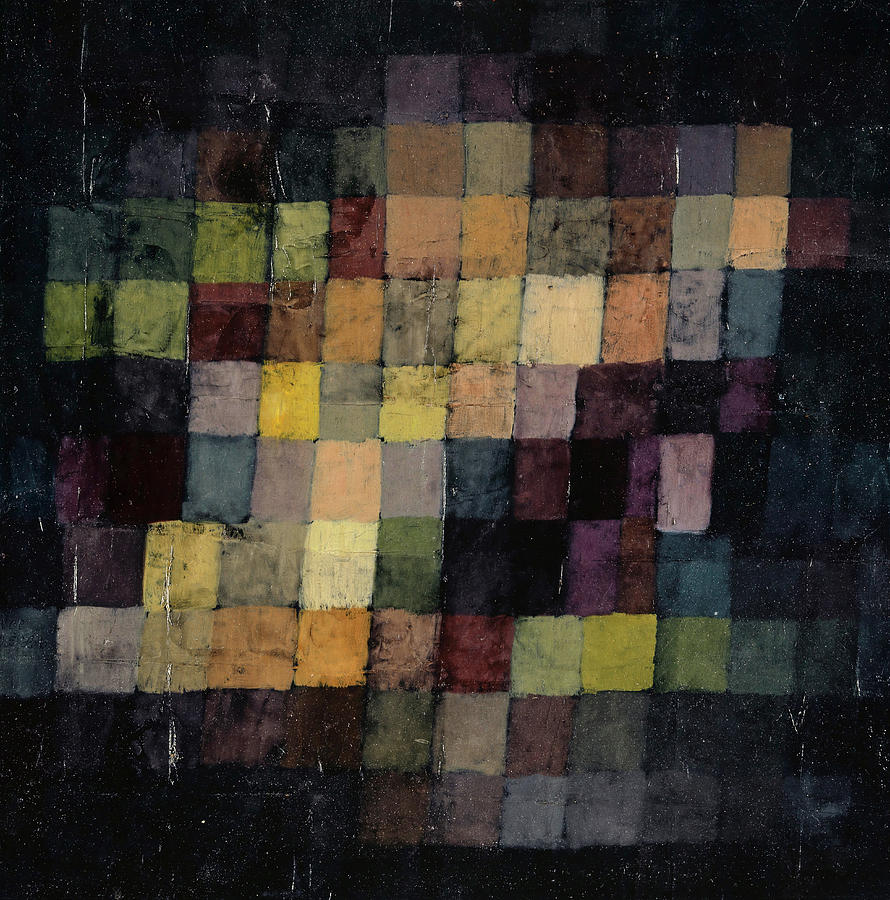 Good morning, solvers! I liked this grid with the repeated L shapes. Bullets: 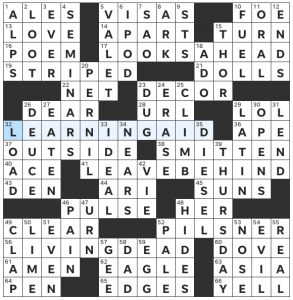 Others have probably mentioned this before, but I think it is really a feat how USA Today manages to make an easy puzzle that is so filled with trivia I have never heard of. When I run into trivia in other puzzles, so often it is a convenient name of a white person who died decades ago, or some detail of Latin that I will never memorize no matter how many times I see it. In these puzzles, they highlight people that I am excited to learn about– frequently artists who have become known in the past few years. (I’ve just placed two of Kacen Callender’s books on hold at the library!) And they do so using common words like POEM or EVER. 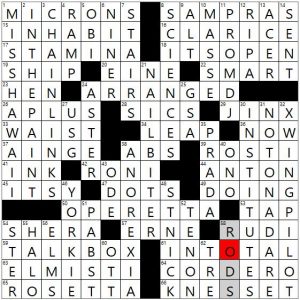 I ripped through three-quarters of today’s grid from BEQ (the sports-heavy sections) before coming to a dead, dead stop in the southeast sector, which had just enough names I didn’t know. 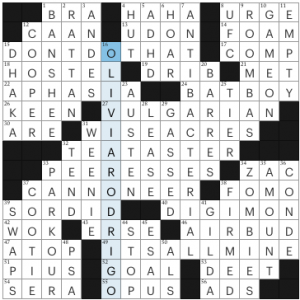 Usually there are a few Natan clues that really sing to me, but I didn’t cotton to anything this time.