This week we’re looking for a basketball term. There were a couple of long across entries, but no obvious themers. This was a classic Simple and Difficult (SaD) meta: you could spot it very quickly (or not). I was in the latter category and needed a nudge to find the signal. 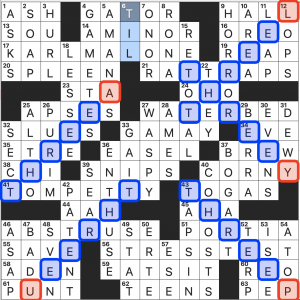 With the Fiend deadline looming: I asked a solving pal for a nudge. Then I saw it: THREE appears diagonally in the grid five times, and each THREE “points” to a letter. In grid order those letters spell LAYUP, our contest solution.

I analyze metas that I miss with the hope of improving my future solving skills. In hindsight: frequency analysis gave a hint, but the P’s threw me off (frequency analysis is often a noisy endeavor). Scanning for diagonal entries is one of my go-to mechanisms, but I haven’t solved a meta that used that technique in a while, and forgot to try it here. And I looked for the letters in POINTER in the grid, but didn’t do so for THREE. I would have solved it if I had.

This is a fantastic meta: the title locks in directly with the solution, and the answer was a no-doubter. I didn’t submit for the coveted mug because I got a nudge, so everyone’s chance of winning is now roughly 0.1% higher. Good luck! And be sure to let me know how you approached this Simple and Difficult meta. Tom Petty’s in the grid, and I already used Square One, so we’ll end with While My Guitar Gently Weeps from George Harrison‘s Rock and Roll Hall of Fame induction ceremony, featuring Tom Petty, Jeff Lynne, Steve Winwood, Dhani Harrison, and Prince.