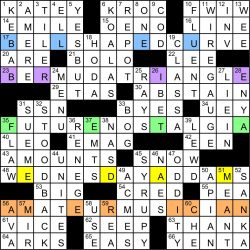 Hello there, everyone! Hope you’re all doing well! Before talking about today’s grid, a reminder that today (Tuesday) marks the 2022 launch of the Muller Monthly Music Meta contest crosswords. It is an activity that so many of you who regularly contribute to our discussions about crosswords eagerly await, and I know that a number of people who might not have known nor solved any of Pete’s puzzles will enjoy. (Will have to start in earnest this year, especially since I’m writing this promo!) More information on the MMMM can be found on pmxwords.com.

Today’s puzzle from the Big Cheese of Crossword Nation is definitely cheesy, as in the circles contained in the five theme answers combining to spell out a type of cheese. Spread love…and cheese!

Had a bit of an embarrassing holdup on the left side of the grid when I put in “try me” for SUE ME to start and just went about my merry way for a bit after (31D: [Litigious person’s dare]). After growing up loving her as Peg in Married with Children, my admiration for KATEY grew even more when she voiced Planet Express ship captain Turanga Leela in one of my favorite shows ever, the animated sci-fi comedy Futurama (1A: [“Shameless” actress Sagal]). The paralleling nine-letter non-themed entries were decent as well, with WIRE GAUGE the standout of the two in terms of fill (11D: [Measuring device for electrical materials]). Took a second or two to figure out INV referred to invoice (12D: [Small bill?]). We’ll see if I can ABSTAIN from the merlot and any other spirits while waiting for the arctic blast to sweep in to the city for the next couple of days (30A: [Forgo the merlot]).

“Sports will make you smarter” moment of the day: WEE (13D: [Teeny]) – My dad once bought me a baseball game for our computer, Tony LaRussa Baseball, and the default rosters for all the teams was a makeup of each team’s all-time great players. On the Yankees roster, along with the obvious names (e.g. Ruth, Gehrig, DiMaggio, Mantle, etc.) was the last name of Keeler, who I did not know. He was “Wee” Willie Keeler, one of the great contact hitters and players during the turn of the 20th century. Keeler was reported to be just 5-foot-4 1/2 inches and 140 pounds, earning his diminutive nickname because of that, but Keeler, who played from 1892 to 1910, ended his career with 2,932 hits, a .341 batting average and won the National League batting title in back-to-back seasons (1897, 1898) while playing for an earlier edition of the Baltimore Orioles. In 1898, Keeler set a Major League record with 206 singles, a record that stood for over a century before a future Hall of Famer, Ichiro Suzuki, eclipsed the mark. 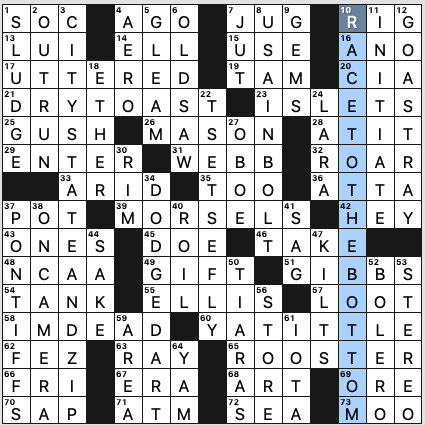 This works just fine. But if you ask me (and no one did), the revealer implies the movement of the race word to the bottom of the phrase. So I would have liked to see the theme where that happens. For example, BOLT CUTTERS would become CUTTERS BOLT [Class ditchers flee?].  FLY PAPER would become PAPER FLY [Origami insect?]. Et cetera, et cetera. You know the drill.

But as I said, this works, and I don’t mind it, and it makes for a fine Tuesday grid.

In the fill I like DRY TOAST which sounds awful but makes for an interesting entry. Also good, “I’M DEAD,” MORSELS, ROOSTER, and PONTIFFS. I needed most of the crossings for Y.A. TITTLE [1963 NFL MVP in the Pro Football Hall of Fame], though I may have seen the name before, probably in a crossword. I would be fine not seeing it in another puzzle again.

That NW corner was unusually tough with SOC at 1a and LUI AT 13a. Not a great start to the grid. 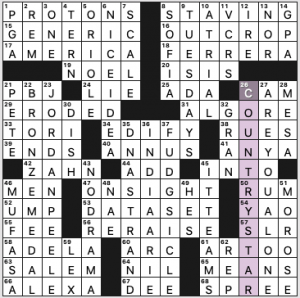 The theme revealer is COUNTRY STAR, 26d. Grand Ole Opry performer … or a hint to 17-/18-Across and 23- and 36-Down], and those three themers are celebrities who aren’t country singers, but rather, famous people with national first names:

This is a solid Tuesday offering. The theme works and there’s nothing much in the fill that bothered me. I’m generally not a big fan of circles; in an early-week puzzle I can forgive them.

The revealer starts at 36a. [With 38-Across, unpublicized skill found in each set of circles] is HIDDEN/TALENTS. Here are the theme answers with the circled letters in orange. 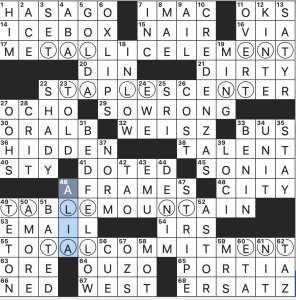 I didn’t realize until now that TALENT is divided up TAL/ENT in the grid-spanners and TA/LE/NT in the shorter themers. That’s taking symmetry to the next levels. Nice! Also nice: four theme answers and a revealer and not much dreck in the fill. 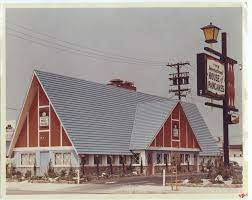 What I didn’t know before I did this puzzle: that NAIR makes (or made?) something called Wax Ready-Strips. I also am not familiar with ALIA Shawkat of “Arrested Development.”

This one ought to be in pictures.

THEME: Phrases where the last word are synonyms for “photo” are clued as if they are images. 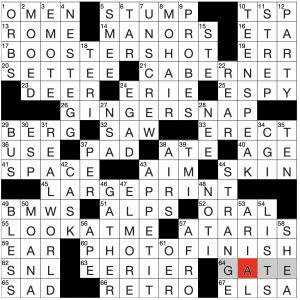 I almost want to add LOOK AT ME! to the themers. Seems apt in a way :)

Nothing really sticks out as scowl-o-meter inducing at all. An enjoyable, if very breezy, solve. I have nothing else to add! 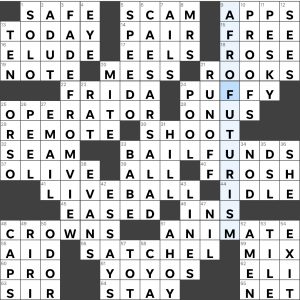 A Cut Above“ by Adesina O. Koiki & Brooke Husic

Theme: vertical themers today so the first part of each themer (the “above” portion) is a type of hairstyle (“cut”, as in haircut)

The title for today’s theme is a nice set-up without giving too much away, as “cut” could refer to a number of things and be used in many ways but “above” had me looking at the downs for the themers. FADEFROMVIEW required some crossings towards the top of the phrase, (as you’ll see ELUDE lived up to it’s word for me!), though the last part filled in easily and so I worked up from there. CAESARSALAD was an easy fill and is one of my favorite salads, though I didn’t know the name of this haircut (until today) though it’s one I recognize, so this is where I was unsure about the theme until the final themer. AFROFUTURISM is a great genre that can include a variety of genres (sci-fi, fantasy, magical realism, alternative history) in all types of media. Lately I’ve been watching things more than reading but this is a great reminder, with Octavia E. Butler, to add more books to my reading list. This theme puzzled me a bit more than usual, since I didn’t recognize the second themer, however, I’m glad to now know the name for this haircut and found a Men’s Health article with all of these haircut examples, on which the first image is of Michael B. Jordan with a Caesar cut (fyi: full browser size has a click-through galley but if you make your window smaller or are on a mobile device, it will appear as a scrollable article with all of the images on a single page).

Stumpers: ELUDE (“loose” or “ebbed” were my first instincts), IDLE (usually I see it as more of a “lacking purpose” so the clue didn’t click this time), and OLIVE (I don’t know the dish but there are a limited number of green food with five letters so I was able to deduce it)

This puzzle had so many delightful goodies—if you want to know all about the set of sports entries and their clues, read the Constructors’ Notes on Sally’s blog post. Also, there were many entries clued in a fresh way, in particular NET, AID, AILS, SEES, and EELS. Given their prevalence in crosswords, they are helpful fill but sometimes cluing gets into a rut overall for certain clues so it’s great to see new takes or a slightly differently approach to these entries.

As a final related bonus, Into the Motherlands is a live play, online streaming afrofuturism ttrpg (table-top roleplaying game, of which dungeons and dragons (DND) is most well known) that I enjoy watching. It is set in space and is being developed as they test-play it, which I find even more fascinating; for me, I enjoy it as a form of storytelling in which in-the-moment decisions along with luck (yes, occasionally dice get rolled!) help shape the scenes, characters, and overall plot. There’s a main storyteller but the rest of the cast also have a huge role it shaping a lot of it as well. New episodes steam live on Twitch and all episodes are posted on the Into the Motherlands playlist on YouTube and I think are totally worth checking out, whether you are into ttrpgs or just enjoy excellent improv/acting and storytelling, especially expanse world-building (or in this case space-building).