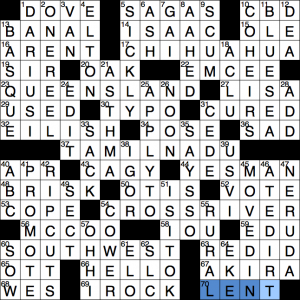 hello and welcome to episode #710 of matt gaffney’s weekly crossword contest, “Just State the Facts”. i solved this week 1 puzzle without the instructions, and it was not too taxing. what are the theme answers? five long answers are the names of non-u.s. states:

anyway, the meta was straightforward enough—taking the first letters of the countries these states are part of (mexico, australia, india, nigeria, ethiopia) spells out MAINE, which is also a state. in the first four cases, the terminology is quite clear—those countries all refer to their largest subnational divisions as states (“estados” in mexico, but that’s the same thing). for ethiopia, matt had only the countries starting with E to choose from, and ethiopia is the only one organized into federated subdivisions which are called (almost) states. it’s close enough to give this one a pass for a straightforward week 1 meta, anyway.

that’s all for me this week. for those of you participating in the mystery hunt this weekend, good luck and happy hunting! i’ll be watching your progress and staffing the hq for palindrome.