The title is meant to be re-parsed as “P-Ending Action.” Theme answers are familiar phrases with a P tacked on to the end of the final word. 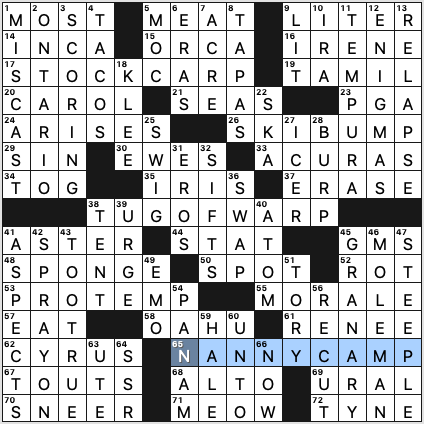 I liked the last one, but the rest felt rather run-of-the-mill. YMMV.

I struggled in that NE corner because for some reason I went with AHI TUNA at 11d [Japanese restaurant order], with the U and final A convincing me I was right. It took a while to toss that and come up with TEMPURA. Similarly, I first wanted ACTORS for 33a [Legends of lots] instead of the correct ACURAS.

Elsewhere I liked MOLEMAN [46d. “The Simpsons” character Hans] (never knew his first name), SPRAY-ON tan, and “TOO TRUE.” I wish there was a bit more sparkle to the grid since some of the theme entries are on the shorter side. But having a nine-letter central entry adds some constraints to the grid. 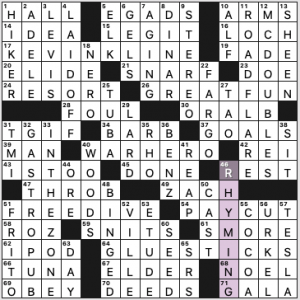 When you see numbers in parentheses after a clue, you start to think “part of a meta puzzle,” and I’d filled in the revealer fully from the crossings so I hadn’t seen that clue. I started to look at the 7th and 9th letters in the first themer, KEVIN KLINE, and then at the letters in the 7 and 9 squares in the grid. But lo and behold, the center themer has a zero in its clue! So neither of those angles would work. I scrolled through all the clues till I found that revealer, 46d. [Like 17-, 26-, 40-, 51- and 64-Across, with respect to the numbers in their clues], RHYMING. Aha! Seven nine, Kevin Kline. Here are the themers:

You’ll note that the numbers from 0 to 9 are each used once in this theme. Well done! 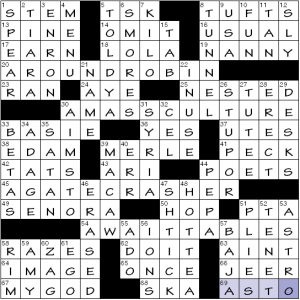 … or, less colloquially but more precisely, “Putting A on Front”.

The letter A is hooked onto the beginning of familiar phrases:

Bit of a yawner, but it suffices. Or maybe prefices? 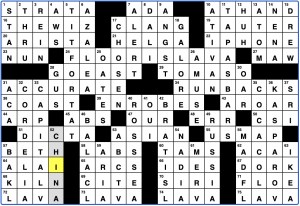 24A clues a “Recent Netflix show based on a living room make-believe game, and this puzzle’s theme”.  That would be FLOOR IS LAVA, and indeed, the floor of this puzzle is made up of four unclued entries that all resolve to LAVA.  In the down clues, four entries make an L-shape to take full advantage of the floor being LAVA:

This is the kind of grid experimentation that’s fun to see, and I’m glad to see AVCX providing an outlet for it. 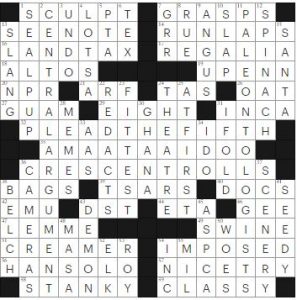 I feel like it’s been a minute since I’ve gotten Erik on a Wednesday. (Please don’t take that as gospel). This is a fun-looking grid, accommodating the 14-12-14 stack in the middle AND a pair of vertical spanners.

I assume AMA ATA AIDOO was the seed entry. And if not, it’s who we’re going to talk about. At first I thought the name was new to me, but now that I read her Wikipedia page, I wonder if I’ve seen her in one of Erik’s puzzles before. Anyway, Aidoo is a Ghanaian (as we learn in 30d) author and playwright whose writings often deal with the tension between western and African worldviews and will definitely be joining my lifetime reading list. (I’ll also preemptively note that the crossing are MORE than fair–dare I say gentle?–if a solver does need each and every one of them. Everyone is going to have their own barometers on this, but “fair” is all I ask for, gentle or not.)

AMA ATA AIDOO is bracketed by a pair of highlights: CRESCENT ROLLS [36a- Rising moons] and PLEAD THE FIFTH [32a Be V quiet?], and I also loved [They’re always bringing up old stuff?] for PALEONTOLOGISTS.

A short batch of notes: 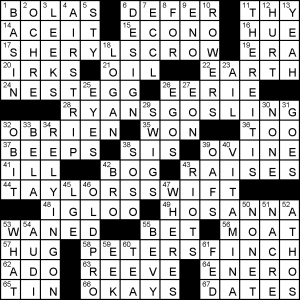 I feel this theme by Craig Stowe could easily have been Sunday-sized, for better worse. People with an avian surname have a possessive added to their first name to make their surname their pet. All four are recent-ish pop cult players, so no Christopher’s wren, John’s jay, Ben’s crane or plus-sized Florence’s nightingale.

The grid was mostly quite conservative: OBRIEN, clued via 1984, HOSANNA, and VITAMINA were probably the trio of high points.