Today’s Fireball is by Team Fiend’s own Malaika Handa! This one kept me guessing until the very end. It’s a twisty theme with a very satisfying “aha!” moment.

The title may be a tad misleading; the puzzle has nothing to do with cards. The revealer at 38a tells us that it’s “Let’s Make A Deal” instead (and also explains why this puzzle is 16×15). [Brainteaser named for a game show host….and a hint to this puzzle’s theme] is the MONTY HALL PROBLEM. There’s a full explanation here. The very abbreviated version: in the game show, you have three doors and have two chances to pick the one that hides a car. If your first guess is wrong, should you stick with your choice or change? You increase your chances of getting the car if you switch (see above re: full explanation). I got the revealer early on and it took me far longer than it should have to realize I needed to look for DOORs and that it might be a rebus. It is. There are, not surprisingly, three of them. 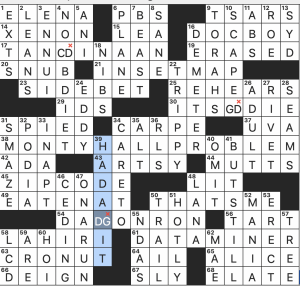 The Downs that cross the rebus don’t have DOORs. Let’s see what they have instead.

So behind Door #1 is a CAR, and behind the other two? GOATs. Nice! 39d bogged me down – I started with HAD A TRY and then when I realized it was a rebus kept thinking it was HAD A CRACK AT IT. Oy. I really liked this theme! Very original, well-executed, and fun to solve.

What I didn’t know before I did this puzzle: that (Sir William) Ramsay discovered XENON.

There were two possibilities for this theme when I saw the title. Either first names were removed from theme entries or they turned downward at some point. It turned out to be the latter.

That doesn’t mean I figured things out quickly; it still took some doing to fully see what was happening thanks to Thursday-level cluing. But the end result is a chewy but chewable theme and grid. 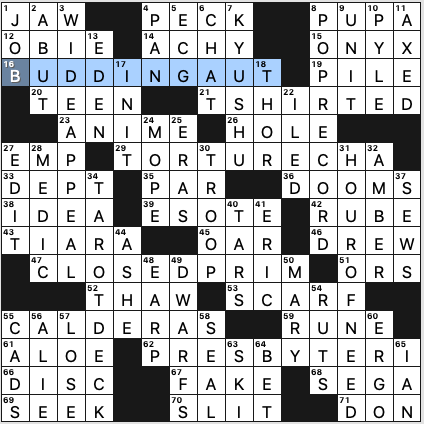 This was fun to suss out, but I’m also impressed at the construction. Three of the five theme answers cross other theme answers. And I like the mix of names from men and women, past and present. 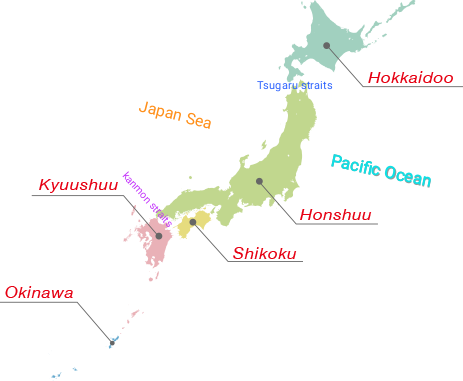 Another thing that slowed me down at the beginning was the entry T-SHIRTED [Casually dressed], because, I thought, who would use that as an entry if it wasn’t part of a theme? But other than that odd entry, the rest of the fill is lovely with WIDE APPEAL, POP RECORD, HOUR OF NEED, TAROT DECK, CALDERAS, and DWARFS. The term TAROT DECK seems much less common than TAROT CARDS, but it makes sense. I also didn’t know Nagasaki’s island of KYUSHU, but it makes for a good geography lesson. KYUSHU is the third of the five largest islands after Honshu and Hokkaido. 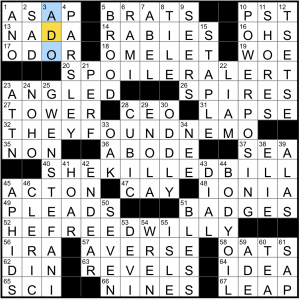 Karen Lurie has today’s NYT, and boy does 20A’s SPOILER ALERT (“Important warning before you answer 32-, 40- and 52-Across?”) spell out what’s going on well:

Alright, these aren’t entirely spoilers, but this is a fun twist of movie names featuring a title with a verb in the present tense.

other nice things: GWEN STEFANI POWER POSING (which you can sing to the Teenage Mutant Ninja Turtles theme song if you so choose), RABIES OMELET, and ANGLED SPIRES LAPSE. 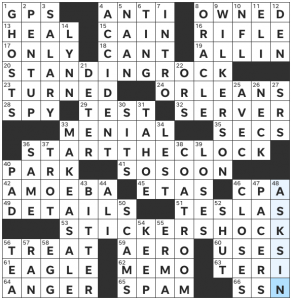 A classic USA Today theme today, and a satisfying one! The best part of the puzzle for me was when I got to 53a, thought to myself, “well, that could be anything”, and then remembered the theme and instantly knew the answer. I love aha moments like that! Having the word STOCK split the same way each time (ST/OCK) made it a bit easier to suss out the theme answers, but given that there are only two ways to split it into parts where all of said parts are longer than one letter, I actually prefer them to all be split the same way. Plus, all of these answers are excellent! Living in the midwest for the past couple years I heard a lot about STANDING ROCK; if you haven’t heard about their fight against the Dakota Access Pipeline, I’d encourage you to learn about it. 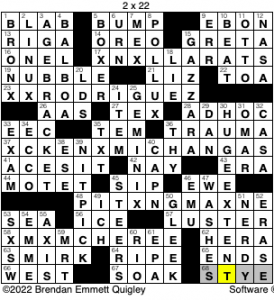 Full Disclosure: I’m not 100% sure I’ve got this theme completely nailed down, so feel free to add anything in the comments that you think is useful for understanding it.

17a CHINCHILLA RATS was tricky since CHINCHILLA on its own fits perfect here, and I didn’t know that there was a difference between the two (Chinchilla rats appear to be smaller). Also, I found it odd that the crossing words in each treated the X replacing CHI as Xes (i.e. 1d [“Where hip-hop started”] BRONX crosses the first CHI in XNXLLA RATS). I’m sure that there’s only so many double CHI words out there that would work in a puzzle, so I can see both sides here.

Other things I found interesting:

That’s all from me today, folks! 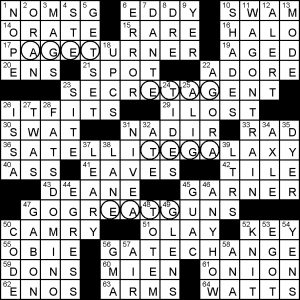 George Jasper’s theme is a fairly conventional riff off GATECHANGE, a phrase I can’t recall encountering, that said most airports here don’t have enough gates for that to be a thing. GOGREATGUNS is an excellent entry, and PAGETURNER and SECRETAGENT are serviceable. I’m not sure any but the most ardent astronomers were delighted to puzzle out SATELLITEGALAXY though.

THEME: Synonyms for “party” can be found at the beginning/ends of common phrases 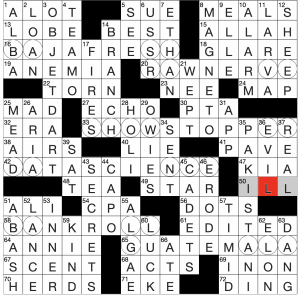 This is a very impressive grid. Astounding to fit six long, extremely solid, interesting themers. Nothing about the grid seems forced or shoehorned for the sake of “getting another themer in there.” The resulting fill doesn’t suffer in the slightest. Enjoyed uncovering OBJET D’ART (I’m assuming I put the apostrophe in the right spot?), and HOLI, both of which were new for me but fun to learn. Also, I hope the PAKISTANI is enjoying their vacation in GUATEMALA!

Other new things (for me):

ANNIE Easley, and I really want to know what “jiaozi” is. Also, can I use that in Scrabble?

I’m gonna forego the complaint about circled letters being included here but not in the grid offered to the masses. This is a puzzle that is better served with circles. Doesn’t seem like Universal cares about the issue of offering two different solve experiences all that much.