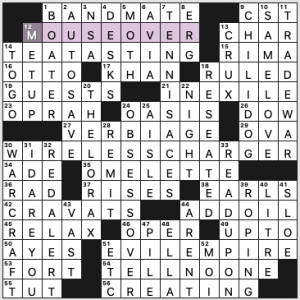 Great puzzle from Matthew and Sid! My fave fill includes MOUSE OVER, VERBIAGE, WIRELESS CHARGER, EVIL EMPIRE, World of WARCRAFT, my beloved AUTO-SAVE, OBSESS OVER, READ UP ON (but not the UP TO crossing’s overlap … I do like MET UP and at least it’s on the far side of the grid), CHILI DOG, and “SAME LOVE.”

Not loving ADD OIL as an entry. What do you think of it?

The theme is this: Theme answers are familiar phrases where one of the words contains a 3-letter body part. That body part is ignored by the clue and by the crossing Down answers. The premise being that a local anesthesia (see title) has been applied and that body part it is now out of commission.

There’s an additional hefty, and confusing, clue at 1d: [*Caddie’s pegs (Hint: Each starred clue’s answer ignores its square in 14-, 22-, 34- or 43-Across.)]. “Its square”? I was told there would be no math. I had to reread that a few times, but the gist is that we skip over the square that contains a body part letter in the starred Down answers. I won’t list them here for brevity’s sake, but you can see them in the grid. (TEES is the answer to 1d, and it becomes TEEMS in the grid, e.g.) 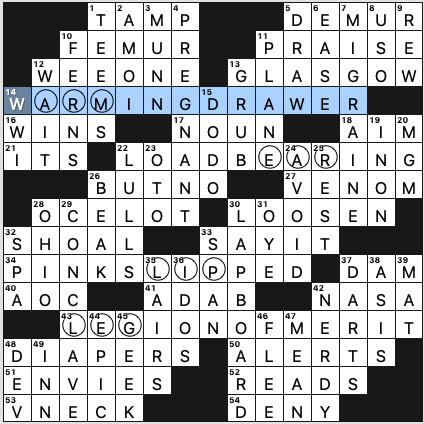 Once I got to filling in actual theme answers, I realized I’d seen this sort of thing before, and all the time I spent trying to grok the clue hints felt like wasted time. But then I got to enjoy the theme, both in the actual theme entries and in the crossing Downs.

This must have been tough to construct with all its crossing constraints in every part of the grid. No doubt that accounts for the unusual grouping of blocks in the NW and SE corner. It also puts some limitations on long non-theme fill, but what we have is decent enough: PREGNANT, MIGRAINE, CONC(L)AVE, and LAPBOARD.

In sum, the theme was great, the heavy-handed theme clues not so much. 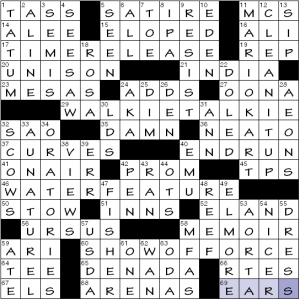 Words for film presentations as parts of re-parsed phrases.

Okay, not thrilled here. Each of the clue/answer pairs seems to have one or more shortcomings.

TIME RELEASE: (1) vague connection of time-travel film to “time”, (2) answer is not a particularly compelling phrase.

WALKIE-TALKIE: (1) “talkie” seems like a woefully obsolescent way to describe a film

WATER FEATURE: same 2 issues as 17a

SHOW OF FORCE: (1) different construction from the other three theme answers

Good morning folks! This puzzle was a work out for me, twice as long as my usual Friday times. The SE was the last to fall, although I am very proud that I got it without Googling any of that trivia. 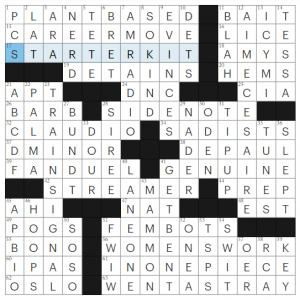 Theme: Each themed answer breaks up the letters in WING so that they start and end the phrase, spanning the answer. 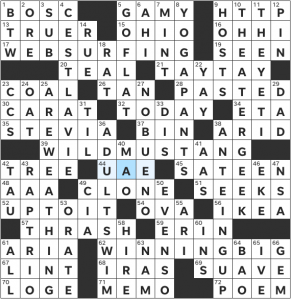 I love the game Wingspan, so I was immediately sold by the title. As I worked through it, I was not disappointed by the fill either. The theme was nicely encapsulated in the title, and the theme answers were creative. It was cool to see WING broken up differently in each answer. WINNING BIG was my favourite of three, especially since it aptly crossed 38d [“Paying to pay poker”] ANTEING UP.

On that note, I loved the longer fill of ANTEING UP, 4d [“‘That’s just how it goes’”] C’EST LA VIE, 8d [“Athleisure made for posing”] YOGA PANTS, 10d [“Person with a Playbill collection”] THEATER GEEK, 25a [“‘Can you define this relationship, please?’”] ARE WE A THING, and 36d [“Late-night programming block on Cartoon Network”] ADULT SWIM. It took me forever to get C’EST LA VIE because I’m not up on my pear types so from 1a [“Pear variety”] BOSC, that was gonna be tough. ARE WE A THING was also incredible and made me laugh just imagining the dialogue between clue and answer.

One thing I’ve noticed as a solver is that it’s sometimes difficult to differentiate when an answer will be NSA and when it will be CIA. I had the S and A from SEEKS and IKEA respectively, so this was a no brainer, but I was pleased to see that both 47d [“Cryptanalysis org.”] NSA and 49a [“Spy org.”] CIA also makes an appearance to give the more espionage-natured organization a clearer contrast to NSA in this case. I know there’s some overlap between what can be attributed to each, but I think it’s worth pointing out since both appear so frequently in puzzles.

That’s all from me! A fun puzzle to start my weekend…and an added reason to play Wingspan the game with that bonus day off on Monday.