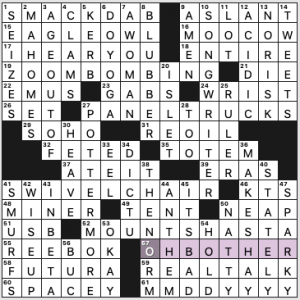 Seven minutes is on the long side for a Saturday NYT for me, but I’m calling it a triumph after under 4 hours of sleep last night and a migraine that lasted till evening. Yay me!

Fave fill: SMACK DAB, ZOOM-BOMBING, PANEL TRUCKS (wait … they’re “of old,” are they?), SWIVEL CHAIR (sitting in one right now! I have another at my jigsaw puzzle table), MOUNT SHASTA (nice to have an entry that doesn’t cheat with MT.), Pooh Bear’s “OH, BOTHER,” REAL TALK, MM/DD/YYYY, Patrick MAHOMES, AGE OUT OF (would have preferred it if the SPACEY clue weren’t [Out of it]), DO YOGA, POTTERMORE, and BLUBBER (it’s January! Do you have your blubber layer yet?).

I could write more, but it has Been. A. Day. So I’ll sign off—four stars from me. 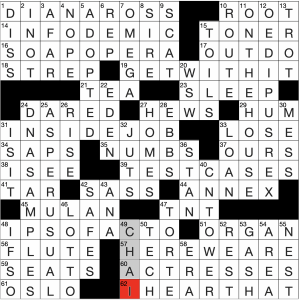 Another Saturday, another lovely themeless. Still quite easy, as my time for the first three of these series leads me to believe (my average time for a themed Universal is between 4:00-5:00… I’ve been under 4 minutes with all so far).

Really liked INFODEMIC, despite this being the first time I’ve heard the word. I’ve heard I HEART THAT***, but I have a feeling it won’t be an enduring phrase. Still, it’s quite lively for the moment.

***UPDATE*** Yes, I misread the entry. It should be I HEAR THAT, which, of course, will stand the test of time way better than I HEART THAT. Please accept my deepest apologies. The following depiction of the “ten year challenge” that’s currentlyall over Facebook is most accurate for me: 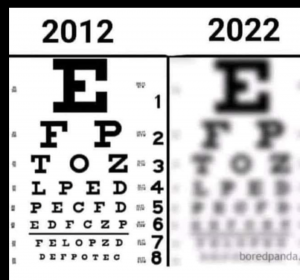 Like the hard-to-swallow fact for the LOTTO clue [Game nearly everyone loses]. I buy a lotto ticket about once a year, just to remind myself of that. I will admit, however, it is hard to stay away from the pools at work once the jackpot is huge… I mean, could you ever forgive yourself if you were the one who held out while the rest of your colleagues enjoy an early retirement?

The one clue/entry pair that grated a bit was ACTRESSES for [All of the leads in “Ocean’s 8,” e.g.] simply because it seems to highlight the genderization of that word. I thought we were trying to move away from it as it sounds somewhat diminutive. 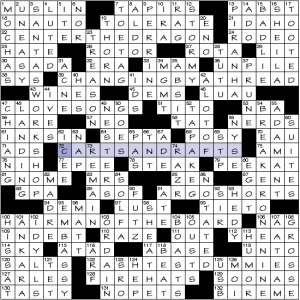 Carbon’s atomic symbol is C. That letter has been removed or added from the beginnings of words in the various phrases comprising the theme answers here, with the net result that the correct number of Cs appear in the grid, just not in all the expected places.

Further, there are no extraneous Cs in the grid.

Next, a transitional element (in the center, of course):

Some really clever ones in there. It’s a good theme. Incidentally, carbon neutrality is insufficient for our climate crisis. Net zero is better, and carbon negative, or climate positive, is far better and should be the goal.

Before I continue, just want to share my first thought when I saw the names of the constructors: 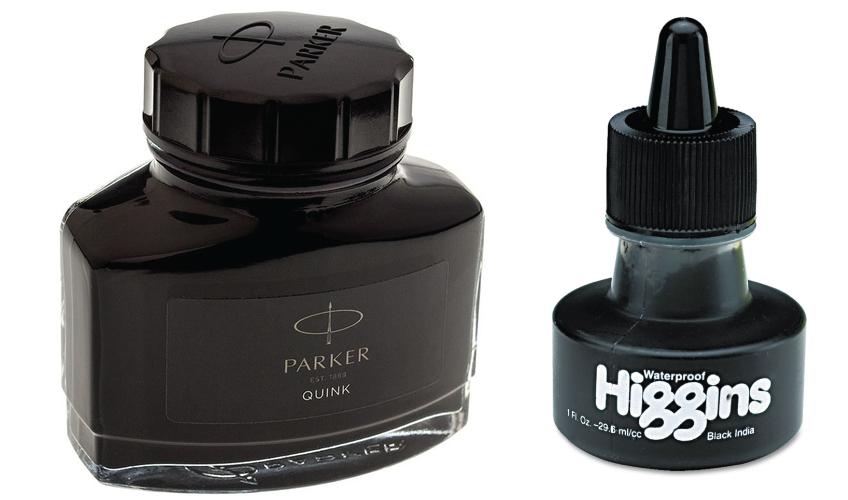 I can’t imagine it’s news to the relevant party, but you never know. 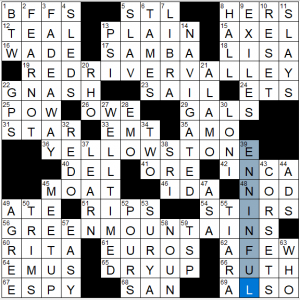 The theme is straightforward; the three themers evoke a traffic light. 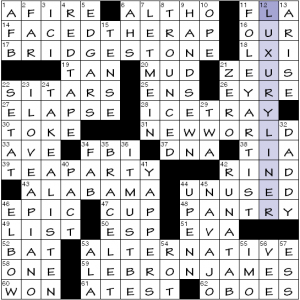 Yep, it’s a Stumper. Despite the ‘less rough’ appellation,, I still found this one to be rather bearish. Didn’t help that there were some gimmes that I somehow didn’t read the clues for until late in the game, such as 39a [Event attended by Alice] TEA PARTY. That definitely could have helped me earlier, as I struggled for a time to finish in the southwest area of the grid.

The grid features stacked pairs of 11s in a pinwheel arrangement, and they’re all rather good. Cracking them is the key to resolving the grid.

Gosh, I kind of went country this morning. Oh well. 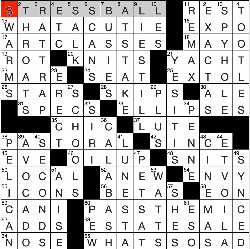 The name C.C. Burnikel conjures up images of nice easy USA Today puzzles with tightly constructed themes and no stumbling blocks. Which is why it’s fun to see she can challenge us on Saturday as well — and this puzzle was more of a challenge than LAT Saturday usually is, bringing me to a smidge under the 4-minute mark.

The hardest challenge, at least for me, was in the NW area; the short entries crossing that stack of 10s didn’t provide any easy footholds (and the fact that RAT TRAP at 3D could very easily be RATHOLE didn’t help). Nailing down the 7s in the NE and SW corners proved to be my way in.

It wouldn’t be a C.C. puzzle without some reference to delicious Asian food — star ANISE at 51D, and I appreciated that MAYO at 18A, which typically gets a more Euro reference, was clued with respect to its place in a banh mi.

I didn’t love WHAT’S SO SAD, more because it felt contrived than because of the dupe with WHAT A CUTIE. But the great clues for [Duel personalities] for SECONDS, [Reason to go green?] for ENVY, [Juice amounts?] for WATTS, and the tough [Moving multitudes] for SWARMS more than make up for that. I was looking for fun with this byline and the puzzle did not disappoint!