Happy mid-January to you all! I hope you’re managing to make it through these days – it can be a tough time of year to feel motivated, especially with spring seemingly so far away… but we can do it! These puzzles and this community is certainly part of what keeps me going. We’re glad to have you here! Ok, onto the Sunday NYT puzzle: 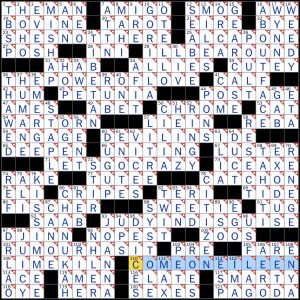 As best as I can describe, the theme entry explain what’s going on in the clues (or vice versa). Some of the themers are fill in the blanks, a few are words hidden in other words, etc. Even though I love cryptic crossword, this theme somehow didn’t do it for me as much. Maybe it’s because it feels like a very loose theme set? Of all the hit songs (even songs that got to #16 or higher) since 1964, I’d hope for a tighter reason for these songs being chosen and maybe at least a few songs that are more modern than a decade ago. I’m guessing I’m missing an additional common thread aside from ‘look at the fun things we can do with these song titles’ – let me know in the comments section!

(One themer whose clue I did question during test solving was “X^O” for THE POWER OF LOVE. I know that XOXO means kisses and hugs as a proxy for love, but I wouldn’t say that either X or O means love, so it felt not quite right. The editors must have disagreed because the clue stayed.)

Other random thoughts:
12A: SMOG [Delhi issue] – While this clue might be true, it feels relatively uncharitable, especially with how few India-related clues NYT puzzles feature (not counting food).
97A DJINN crossing 97D DR LAO – This was a tough crossing for me, though I should learn DJINN because I feel like it’s come up before. I’m less excited to learn DR LAO, especially since it is a prominent example of a white actor made up to look Chinese. Yikes. Would the NYT puzzle include entries related to movies of folks in blackface? I hope not, so it seems unfortunate that this made it through.

I reckon that’s it from me for now. What did you think of the puzzle? Were there gems that you really enjoyed? Let us know in the comments section!

He’s back! And this time, he’s in court. Not on trial himself, of course. I can’t quite picture Captain Obvious pulling off a devious heist. Not 100% sure I’d want him as my attorney either. But hey, Vinny eventually did a bang up job in My Cousin Vinny, so who knows? 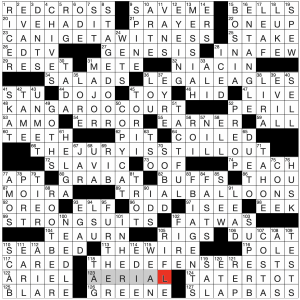 I’m a big fan of Captain Obvious puzzles. There is something delightful about knowing what to expect while at the same time finding the theme fresh and fun. Also, I’m all but certain to plop in a few long themers without any help from the crosses whatsoever, and let’s be honest, who doesn’t like that feeling once in a while?

In this one, the first three needed no help at all from the crosses (for me). Instead, they helped me out with some fill areas where I was unsure. More often, it’s the other way around. But in a courtroom theme like this, one only needs to peep the word “marsupial” in the clue without even reading the rest to plunk in KANGAROO COURT. Very satisfying.

The south proved a bit harder for me. Is it okay if I admit I don’t know what TRIAL BALLOONS refers to? I feel like in a Captain Obvious puzzle, everything about the themers is obvious, so I should probably know that. Let’s see….: …a tentative measure taken or statement made to see how a new policy will be received. Oh! That makes sense. Nonetheless, the answer was inferable and I learned something.

Fill was enjoyable, but I don’t remember anything standing out too strongly. I did double back to read the clue for OREO, which I had filled in without reading, but I love OREO clues. This was a good one: [Brand that created a cookie-flavored wine with Barefoot in 2021]. I hate to admit that I am curious and would like to try it, despite not being a big fan of the Barefoot brand.

A few new names. Ashley GREENE, LUKE (not NIC!) Cage, and perhaps one or two others. Not nearly as many as I have seen in the past and easy enough to determine. SO BAD / BUFFS  / FASTS / SLEW / TACTFUL area was the last to fall for me. That one took a bit of elbow grease. Everything else, pretty danged smooth!

Already looking forward to the next Captain Obvious. I’m thinking we’ll see him… May? June?

Our theme today consists of familiar(ish) phrases where one of the words can be a rough synonym of “job.” Each phrase is then clued wackily using this alternate meaning. 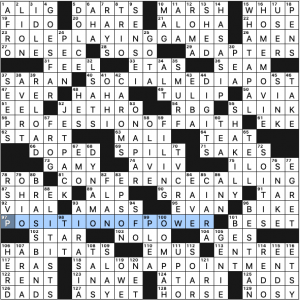 The fill is mostly nice with HOME MOVIE, BRASS BAND, BEST MAN, DYNAMO, HABITATS, and “SO IT IS.” I struggled somewhat with WHAT A PAL clued [“You’re so helpful!”]. This feels on the quaint side to me, unlike the clue.

Theme: The first words of each theme answer come together to form the phrase “I owe you one” when spoken aloud. 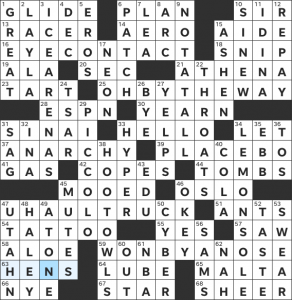 Zhouqin Burnikel’s USA Today crossword, “Thanks in Advance” solution for 1/16/2022

I thought that this was a fun theme, with “in advance” being the key part of the title. It felt odd to put so much focus at first on the OH and the U of the first answers until the phrase clicked together for me. I loved the reminder about EYE CONTACT being viewed differently, confirming what I have found to be an American focus on making EYE CONTACT whenever you’re speaking with someone.

Grid-wise, I felt like this made for a smooth Sunday solve, breaking my average of 5 minutes per USA Today puzzle. I was shocked by 38d [“Birds heard at night”], not realizing that HOOT OWLS is an actual name used to refer to some specific owl types. Likewise, I was unfamiliar with 34d [“Fish with a fruit in its name”] LEMON SOLE but it was pretty easy to catch the fruit of said fish and the SOLE on the crosses. Finally, I appreciated the dispersal of name clues throughout the grid. I got stuck for a bit on Alex HALEY in the southwest corner, but once I stopped overthinking it, his last name came through.

That’s all from me for today on this great Sunday grid. Have a good week!