Ooh, we don’t see this very often. A WSJ with a BEQ byline. And check it out. This standard-sized grid has a whopping eight (count ’em) eight full-length theme answers. The theme is quite clear just by looking at the theme answers. 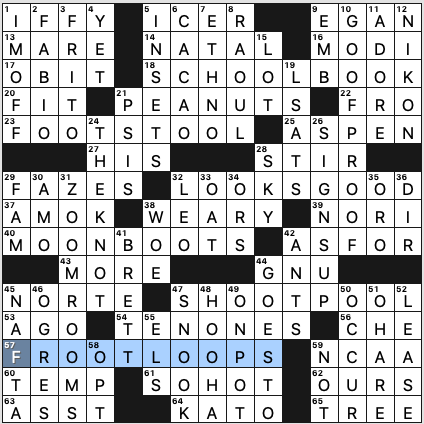 That is a crazy amount of theme material with the two Down entries crossing two other entries (granted, they cross at O’s, but still). I’m sure I’d find another example of this theme if I went and searched Cruciverb, but I can’t imagine finding another one on this scale.

So of course with eight theme entries, there are some eyebrow-raisers in the fill. How could there not be? I’m looking squarely at TEN ONES [Change for a Hamilton] and SNOOK [Thumbing-the-nose gesture]. The first seems quite random and the second quite obscure. I wonder what is the relationship between the gesture and the game of snooker?

Elsewhere we have a couple of stacked proper names (EGAN and MODI) and a weird partial THE KNOT [Site for a bride-to-be]. Oh, it’s a website. Hmm. Well-known enough to be crossword-worthy?

Despite these, I’m still impressed with the grid for the sheer amount of theme material. 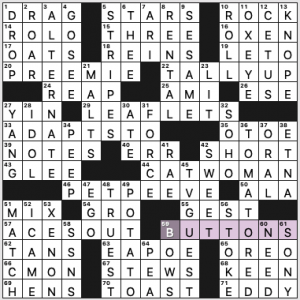 Yay! I worried that the unusual feature of this puzzle wouldn’t play well in the .puz version, but it worked just fine. I know I’ve seen this sort of theme before, but two years into a pandemic, my brain’s gone and I sure couldn’t tell you when or where I saw it previously. The themers are “X and Y” phrases where the X and Y words share their first letter, and they’re placed in the grid such that the two words intersect at the initial:

Entry I wish would vanish from constructors’ word lists: EAPOE. He’s known as “Edgar Allan Poe” or just “Poe.” E.A. Poe isn’t a thing anyone uses. This entry is trash and you all know it! 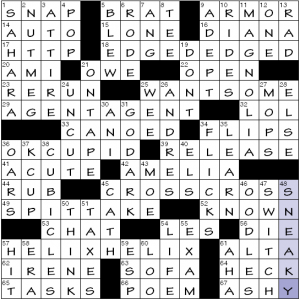 Gentle theme, good for new solvers. Feel as if I’ve seen this one a few times previously.

Editor: Erik Agard
Theme: The end of each theme answer can mean “offspring of” in different languages. 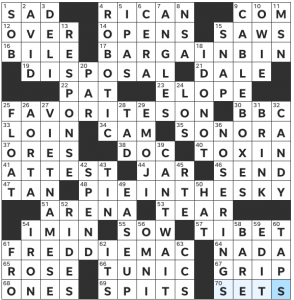 I normally don’t read other folks’ crossword write-ups before I post my own thoughts, in order to keep myself from being influenced by outside puzzle opinions. But today, I solved the puzzle and had absolutely no idea what was going on with the theme, so I checked out Sally Hoelscher’s USA Today blog to get a hint… only to find out that she had been totally stumped today too! So it’s nice to know I was in good company. Looking at the puzzle now, I have seen these terms used before, but at midnight last night when I first solved this puzzle, my brain was not making those connections. The answers today feel solid if not spectacular – PIE IN THE SKY is probably my favorite because it reminds me of my grandma who would say it. 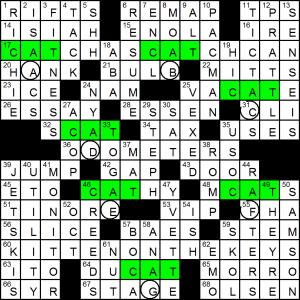 Today’s puzzle by David Poole: the best part is the revealer, a jaunty number by the cruciverbally under-utilized ZEZ Confrey with a cute name. The puzzle unfolds though, as merely “cat” on the letters a to g, this doesn’t allow too much in terms of playful entries beyond CATCHASCATCHCAN, and places an astonishing amount of stress on the grid. Two of the CATS are in [Future docs’ exams], MCATS and [Old Venetian coin], DUCAT, which is already showing the puzzle giving way under thematic weight. The MCATS intersects with USOC. I’d run a long way to not have intersecting non-acronymic abbrs.

There are so many trite to annoying answers in the short to medium fill: CLI is not a lexical chunk. FHA is one of a million FDR-era TLA’s. In one corner we have ETO and ITO with TINORE for company. And I do hope you haven’t forgot about NYAD! 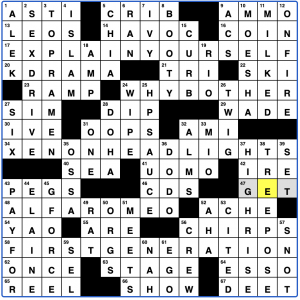 Today’s AVCX is from Brooke Husic and Enrique Henestroza Anguiano, and it’s a clever grid that definitely earned its 3.5/5 difficulty: 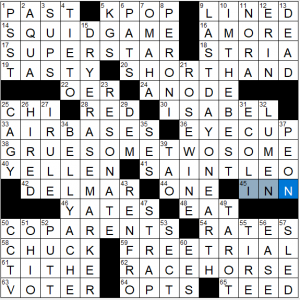 Loved the twin long downs of DRY ERASE MARKER and LAST DAY ON EARTH. There are other plusses in the fill for me, but the true joy in Wyna’s grids are the clues. A few highlights: