Jake Halperin’s Fireball Crossword, “I Might Be a Little Short” – Jenni’s write-up

I finished the puzzle correctly and had no flippin’ idea what the theme was. I figured it had something to do with answers being shorter and some of them were – but some of them were longer, and some made no sense at all. Amy and Jim P helped me out. The varying addition and subtraction of letters to the theme answers was a red herring. It’s a vowel change clue: long I to short I. That’s it. I was too tired or distracted or something to see it. 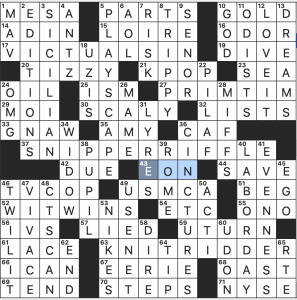 I’m not sure if this is a tricky theme or an obscure and not-great theme or I was just in a fog when I solved the puzzle. Discuss.

What I didn’t know before I did this puzzle: that Coco Chanel said that LACE is “one of the prettiest imitations ever made of the fantasy of nature.”

I grokked the theme about halfway through the grid and even correctly guessed the revealer which is STOP at 68a [“Enough with the lame puns already!” (and, when parsed as three words, a hint to the theme answers)]. The other theme answers are familiar two-word phrases that had their initial Ss changed to Ps. (Could’ve done without the use of “lame” in the revealer clue. Plenty of alternative synonyms available for use: lousy, awful, tired, groan-worthy.) 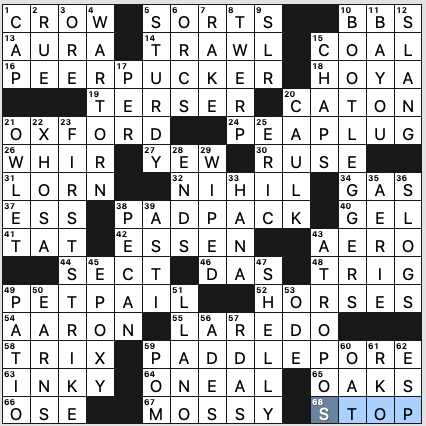 That works. It kept me guessing for the first half of the grid then helped me fill in the second half. I’m not going to say a LOL’d at these, but I found them pleasant enough.

BOOTLEGGERS, ATROPOS, and LAREDO make for interesting fill on the right side of the grid. The left side is decidedly hawklike with FIRST STRIKE and WAR-TORN.

That NE corner gave me trouble with BBS clued [Daisy product] and the unsightly partial CAT ON clued [Williams title start]. The clue on that last one is of minimal help since there are so many Williamses it could apply to (Robin, John, Vanessa, Billy Dee, William Carlos, Venus, Serena, etc.). Turned out to refer to Tennessee Williams’ CAT ON a Hot Tin Roof. Bleh. 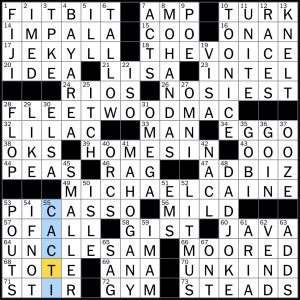 The initials of each answer match the initialism at the start of each clue.  This was a nice set of finds, and I’ll admit going “wait, is 18A just THE VOICE?” without initially parsing what was actually going on for the first minute or so of my solve.

Other fill I liked: the nicely stacked FITBIT (“It counts on your movements”), IMPALA, and JEKYLL (“Side Hyde tried to hide”), Ocho RIOS, PICASSO, TOO NICE, MAHOGANY, and LITMUS 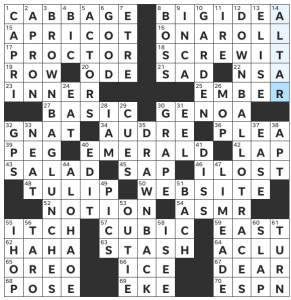 This was the second USA Today puzzle in a row where it took me at least a few minutes after solving to see the theme – maybe if the title had been more specific to basketball I would have seen it sooner? – but once I figured it out I loved it! As a former high school basketball player and a big fan of the Seattle Storm, I’m happy to see the WNBA getting the love that it deserves. Matthew’s two grid-spanning answers of BROWN BAG LUNCHES and DOWN BALLOT RACES are the real standouts here, with DRAWN BACK as a solid third (and personally I love all hairstyle-related clues). I just hope that solvers notice that each answer hides the WNBA and don’t think only the NBA is included. When I was trying to find the theme, though, I noticed the WN pattern in the theme answers before anything else, so hopefully that pattern will help people get the true theme.

I solved this puzzle in a different order than I do most others. I dropped in CABBAGE for 1a [Kimchi vegetable], did the rest of the downs in the top left and then followed BROWN BAG LUNCHES down to the puzzle’s SW corner, and gradually worked my way around counterclockwise to the top right. I did this because I was ON A ROLL and wanted to keep using the words I had rather than jump up to the wide open top right and start all over. The strategy worked and I finished in under 3 minutes, which is a very fast time for me. There are a lot of nice long words in today’s puzzle – LIMEADE! APRICOT! BIG IDEA! SCREW IT! Personally, I’ve found that I’ve gotten some of my fastest times ever on puzzles with more longer answers, because I don’t have to jump around between choppy short answers and read more clues. This assumes that I am able to figure out the long answers thought! Have other people ever felt the same?

THEME: Trees are hidden in common phrases (I’m assuming… the version I solved in the webapp asked me to count letters, and I didn’t) 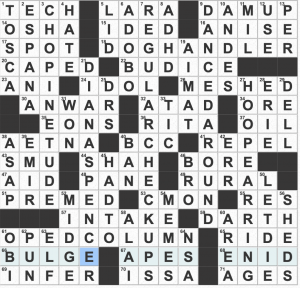 This is one that is far better served with circles in my opinion. I am still befuddled as to why Universal continues to embrace the (very) outdated webapp when all of the competing publications have moved on (very far on at that).

It really made it difficult for me to enjoy, so I solved this one largely as a themeless. I saw PINE in CHOPIN ETUDE and thought “Okay! Trees. That makes sense :)” but I didn’t see any of the others until post-solve. Is it okay for me to admit I don’t believe I have heard of a LARCH tree?

I initially thought the theme would be in DOG HANDLER. The entry is long and in a traditional themer area, and clued punnily like it is, it certainly has all the dressings of a themer. I typically solve a chunk of Across entries first, so I didn’t notice the true themers until a bit later. That was a pretty fun clue for that entry though [Trainer working on a Peke performance?].

I do like these staple Universal clues, but this felt like a bit of overkill. I also like them better when they’re “apt.” But who knows? Maybe ENIDs are known for their rotten ideas and walrus mustaches abound at SMU.

I do appreciate the puzzle and the fact that the constructor found five phrases to fit in. It was a rough solve for me, however, largely due to the online solve experience. 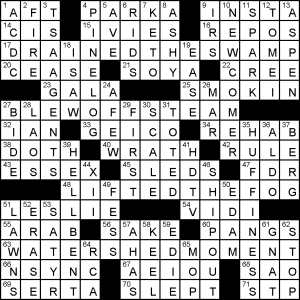 The central concept of this puzzle is a brilliant pun based on WATERSHED (WATER/SHED) MOMENT, with each of three idiomatic phrases, considered literally, doing exactly that: DRAINEDTHESWAMP, BLEWOFFSTEAM, LIFTEDTHEFOG.

Theme: Each theme answer in this puzzle adds QUI (which means “WHO” in French, Latin, and Spanish) to a phrase.

Inserting a phrase that begins with Q had to have been difficult, and it was relatively easy to spot as I filled this grid. I was a bit thrown off by BRANDY QUISLING / BRANDY SLING, mostly because I’m unfamiliar with the song.

This was such an aesthetically appealing grid, and I appreciated 3d [“Passes”] SKIPS A TURN and 42d [“Swimsuit that covers the head as well as the body”] BURQINI. I was much less crazy about the stereotypical nature of 43a [“Conversation topic among gal pals”] MEN. There are so many other ways to clue this that don’t reinforce the idea that women spend all the time thinking about males.

Overall, an interesting puzzle. I thought “Who Goes There” was a particularly fun title to hint at the theme without being too apparent.