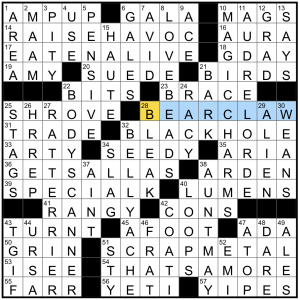 Clue I quite liked: 10a. [New York, Chicago and Los Angeles, in brief], MAGS. Can’t say I really knew there’s a Los Angeles magazine, but I absolutely know Chicago and New York.

Four stars from me. Let’s Friday!

Our theme answers today are two-word food items whose first word can also be a synonym of “smart.” The revealer is BRAIN FOOD (66a, [Grub that keeps you smart, and a theme hint]). 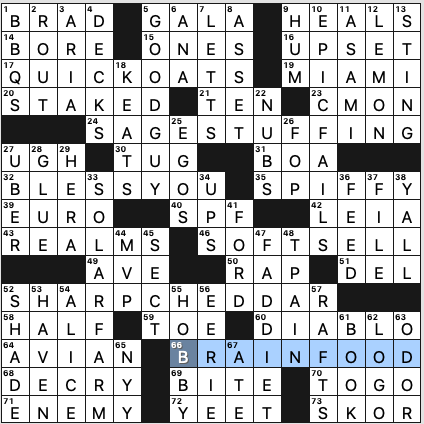 I enjoyed this elegant theme. Grokking the “smart” synonyms didn’t take long, but revealing the food connection made for a nice little aha moment. 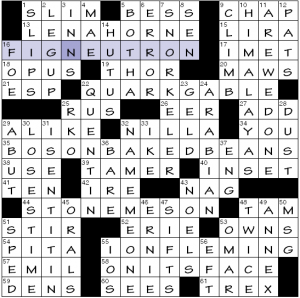 Today’s theme is riffing on physics.

Entertaining enough. I got a slight charge out of it.

Good morning friends! My time was a little slow on this one, not because the puzzle was hard, but because I have developed RSI in my right thumb. I am sort of panicking that my life as I know it (software engineer who makes and solves crosswords) is coming to an end… but I’m probably just being dramatic! On to the puzzle– this was my favorite Erik puzzle in recent memory. I love a layout like this, a high word count (72), with isolated stacks. 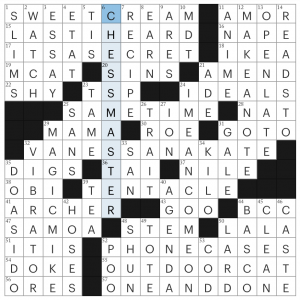 When solving, I jumped right to the central entry (in New Yorker puzzles, Erik typically ((always??)) centers a famous Black person in his grids) to see if I knew who it was and I did not. But eventually she unveiled herself to be VANESSA NAKATE, a climate activist from Uganda.

There was so much that I loved in this puzzle, but the stand out was probably the clue for CHESS MASTER, [Clock-puncher who might receive a promotion and resign in the same day]. There are three elements of that clue that misdirect you to an hourly employee, and they all perfectly describe a chess player. Brilliant.

What else? I liked OUTDOOR CAT— my parents were both raised in countries where an outdoor animal is the norm. We had an outdoor dog growing up (as did many of my friends). And I liked seeing IKEA clued in reference to the POANG chair. I have a theory that 90% of households in NYC have one of KALLAX, POANG, RASKOG, HEMNES, or LACK– let me know if you’re in the 90% or the 10%.

Theme: Each themed answer’s last word is a synonym for “piece,” making them “end pieces.” 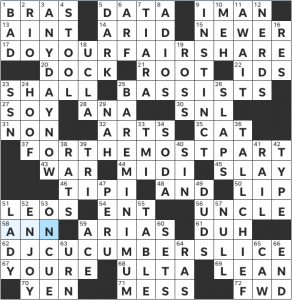 I loved these theme answers. The grid-spanning DO YOUR FAIR SHARE and DJ CUCUMBER SLICE were great, and, I mean, the latter is definitely one of the most unexpected things I have ever 42d [“Use a keypad”] TYPEd into a puzzle. Plus, I felt like DO YOUR FAIR SHARE is the expectation of a group project, and the post-project answer to “How’d everyone do?” is “Oh, it went well FOR THE MOST PART” (if you have a halfway decent group). What a fun time.

We have a wacky shape in this asymmetrical grid, near where BASSISTS meets the left border, creating space for SNL and CAT. I like it though – it felt like a quick solve moving from SHALL and BASSISTS to the quick three- and four-letter answers in rows six and seven before opening up to the middle themer. Then, we’re right back with a quick clip for a bit.

That’s all from me! This was a fun puzzle to skate through. One could even say it had all the right pieces.