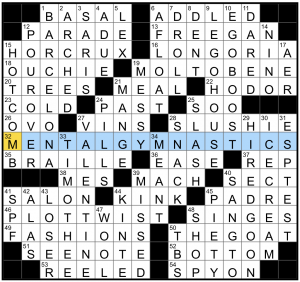 Such a pretty grid, you can zoom around through the curves, encountering all sorts of zippy fill. You have to do some MENTAL GYMNASTICS, and did you notice that phrase is 16 letters long, so the puzzle has loosened its waistband for comfort.

Enjoy your weekend, folks! 4.2 stars from me. 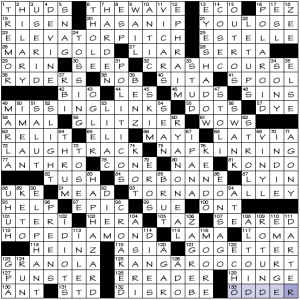 Soo, reinterpretations of familiar phrases so that they apply to sporting venues. 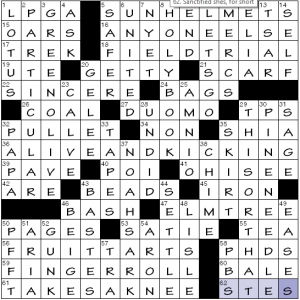 Once again, when I was about halfway through the solve, I wondered if I’d be able to finish it at all, let alone in a reasonable time. And once again, it cracked here and there, incrementally revealing itself until it was all done but for a final two crossings of 25d [Certain DNA test] AMNIO, and soon enough that fell too.

This is in my opinion exactly how a Stumper should play out. 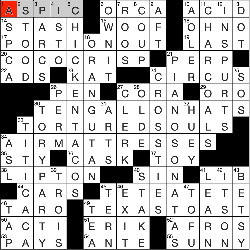 That’s three sub-3-minute Saturdays in a row. I could use a little more of a challenge, please.

Things I like about this grid: COCO CRISP (I have always been amused by the similarity of his name to the cereal as pointed out in the clue), TITICACA (as the Animaniacs said, “Lake Titicaca, why do we sing of its fame? … ‘Cause we really like saying its name!”) TEXAS TOAST, the clue for AIR MATTRESSES, how there was still potential for misdirection in 2D even as I was never fooled into thinking the clue had anything to do with truth-telling. (I just put SAT UP in there at first instead of the correct STOOD.) Also, I’m shocked that Chopin wrote only three PIANO SONATAS, and enjoyed learning that from the puzzle.

What I didn’t like so much: I would love to retire AOLER forever, and the clue for LEARN, [Teach improperly?] really rubbed me the wrong way. I hadn’t thought about this much until recently, when I learned that at least one major puzzle venue avoids cluing words as “slangy” because slang to some might be standard language to another. I’m not sure I will never again use the word “slang” in a clue, but “improperly” here sure feels like an unnecessary value judgment. 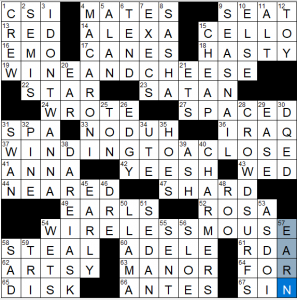 Theme: Each themer is bracketed by the letters of the word “WISE”, which is “cracked” into WI- and -SE pieces.

Something I learned: Fashion designer ALEXA Chung. Usually I learn fashion names from Stella’s Tough As Nails puzzles, but not today. Ms. Chung is also a writer and model for Elle, Vogue, and Harper’s Bazaar. 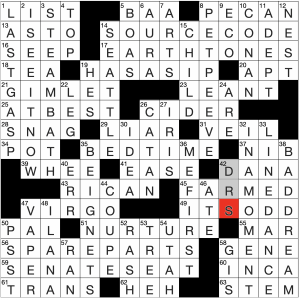 Of the four freestyle puzzles we’ve seen this year, this one took me the longest to solve (just under 5:00), so maybe they’re getting a bit harder?

Really nice corners in this one with some colorful entries. I wasn’t confident with the phrase LAST GASP (though I’m sure I’ve heard it), and- ironically- I needed nearly every cross of I SEE IT NOW! so I was off to a rough start.

ILANA Glazer. Also, I can never remember how to spell BEIGNETS! They are delicious, however.

Enjoyable, as always! Thanks, Hannah.