Not to be confused with Beethoven’s 5th Symphony (the one we all know and love with its dramatic four-note opening), this puzzle refers to ol’ Ludwig’s Piano Concerto No. 5, known in English-speaking circles (ha! see what I did there?) as the “Emperor Concerto”.

Today’s five theme answers each contain a fifth of the phrase EMPEROR CONCERTO identified for us with circles. 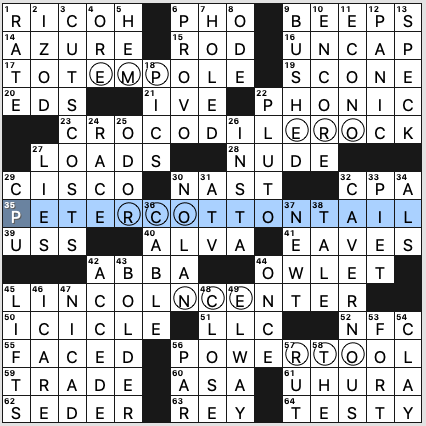 During the solve I didn’t give the circled letters more than a passing glance, and that was fine. It wouldn’t have helped me solve the grid anyway since I’ve never heard the phrase “Emperor Concerto,” heathen that I am. But I can appreciate the serendipity of the phrase being easily broken up into five parts. Even better, I liked the titular play on words with each trigram being a fifth of the phrase and the concerto being one of Beethoven’s famous “fifths” (along with the aforementioned symphony and his infamous Mambo No. 5). So while the theme didn’t resonate with me as much as it probably did with a classical music aficionado, I still appreciate certain aspects of it.

The bonus is that those of us who don’t know the piece have now been introduced to it. I’ve been blogging today while watching/listening to the video below. The truly remarkable thing about it is that pianist Glenn Gould was called on a Thursday evening to come in on Friday morning and play with the Toronto Symphony Orchestra to replace the original pianist who couldn’t perform. Gould said yes even though he hadn’t touched the piece in four years. He practiced overnight and performed before television cameras in truly astonishing, superhuman fashion. I recommend opening the video in a new window and playing it while perusing the rest of today’s puzzle offerings. (I set the video to start in the middle, but I recommend the whole thing, and Part 1 as well.)

Back to the grid. This was a quick solve for me even though I didn’t time myself. That’s probably a testament to the smooth fill. Highlights include CUTS COSTS and CAVERNOUS [Extremely roomy], though I tried CAPACIOUS first for that last one. 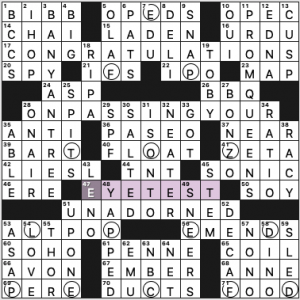 The theme is the optometrist’s or ophthalmologist’s EYE TEST. The themers read CONGRATULATIONS / ON PASSING YOUR / EYE TEST. The circled squares are the letters from the first five rows of the Snellen eye test. The trick with the eye test is to not study the probable letters ahead of time, lest you use your crosswordy visual memory to recall the letters even if you can’t see them clearly. You want an accurate prescription, don’t you?

The theme feels dryer than my eyes in a Chicago winter. (My eyes aren’t very dry at all.) Doesn’t do much for me. 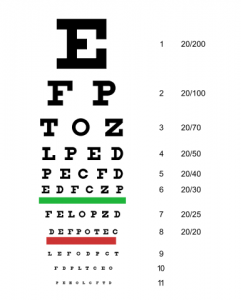 3.25 stars from me. Would’ve liked the puzzle if the theme had felt markedly more playful than an actual eye test, but “congratulations on passing,” meh. Is there even such a thing as passing or failing the Snellen test? You are not going to tell me that someone with low vision is “failing.”

Editor: Erik Agard
Theme: Each theme answer begins with a part of a door. 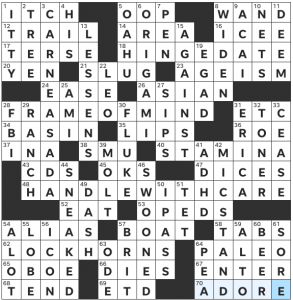 A solid addition to the “these words all belong to the same family” lineup. I appreciate that every single one of the door words is clued in a very-different-to-what-that-part-does-on-a-door fashion. Even the closest, LOCK HORNS, changes from a noun to verb. I like when puzzles make me think about different meanings of common words, and this puzzle definitely did that. The HINGE DATE clue is a pretty deep cut, I will say – I’m on Hinge, and I needed pretty much all the crosses to understand the answer (… let’s not analyze what this says about my Hinge success). For those who aren’t a part of the wonderful world of dating apps, a Rose on Hinge is akin to a Super Like on Tinder.

As usual with USA Today, the rest of the puzzle is super clean. Here’s a rundown of the highlights: 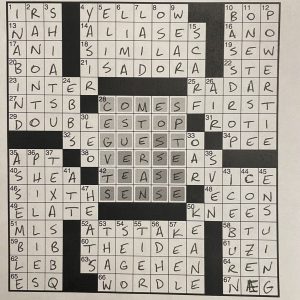 Yo Dawg, AVCX and BEQ heard you like WORDLE (66A, “Daily internet puzzle game in which green indicates right-letter-right-spot, and this puzzle’s theme”), so they put a WORDLE in your crossword so that you can WORDLE while you crossword.

It was highly recommended that you print this week’s puzzle, so I did, but that means I had an extra tricky challenge (on top of this puzzle’s 5/5 difficulty) since I couldn’t tell which squares were supposed to be grey and which were supposed to be YELLOW (4A, “Color for right-letter-wrong-spot in a game of 66A”) without checking the PDF a few times.  Luckily, the WORDLE portion of things didn’t follow full crossword rules on the downs: 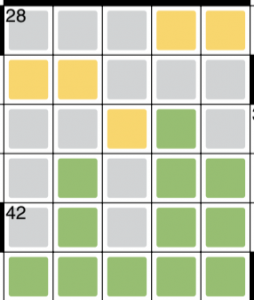 There was a moment in filling this part of the grid out where this felt impossible without the context of down clues, but realizing that each of these needed to internally be a word as well helped this all finally come together for me.  Excellent work, BEQ!

In case you’re a crossword person who somehow hasn’t found out about Wordle yet, here’s an explainer from the Today show.

Karen Stock and Matthew Stock’s Universal crossword, “Back and Forth” — pannonica’s write-up 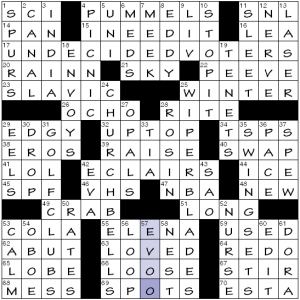 Fittingly, this crossword that highlights things that can be said to go back and forth has left-right symmetry. There’s one grid-spanning themer UP TOP (32a) and four vertical ones descending like legs of a table or tendrils of a jellyfish, even if they don’t actually touch the former.

No two ways about it, this is a fine theme and perfectly placed in the middle of the week.

Okay, this isn’t for everyone, but have at it if you want: 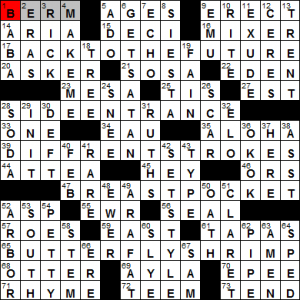 In Darryl Gonzalez’s LA Times puzzle today, DIFFRENTSTROKES is clued as the TV series, helping it to fit into a 15x grid. Each of four answers begins with swimming strokes: (BACK)tothefuture, (SIDE)entrance, (BREAST)pocket, and (BUTTERFLY)shrimp. It is very odd to include side, but omit crawl. 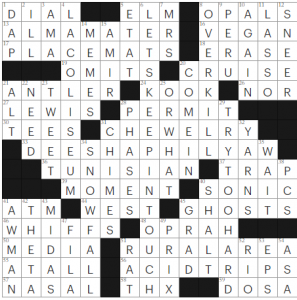 This is my slowest New Yorker Wednesday ever, and I’m not entirely sure it was due to puzzle difficulty or my own brain fog. At least ten answers I felt as if I just couldn’t see despite having multiple crossings. Case in point: I can’t even remember at what point in the day I solved this.

Faves: LA COLISEUM clued to “Wattstax”; the clue for ATM; DOSA (the first time I met Erik, we ate DOSAs).