Today’s theme answers consist of familiar phrases that turn out to be anagrams of two animals found elsewhere in the grid. All the animals are in fact mammals as indicated by their clues ([Long-tailed mammal], [Tailless mammal], [Woolly mammal], etc.).

That is a lot of theme material to pack into a 15x grid. I decided to highlight it all just so we could get a sense of how many constraints there are in every section. Finding phrases that work for this theme and then squeezing all the animals somewhere within is no small feat. So I’m happy to overlook little nits like the MUSKRAT/RAT repetition (especially since the two critters aren’t really related).

I will admit to not paying too close attention to the cross-references during the solve, just to save time. And I was hoping for an additional revealer or conceit to explain why we’re hybridizing two mammals. Maybe an Island of Dr. Moreau tie-in? But no, those hybrids always involved humans, if I recall correctly.

But I’m content with the puzzle as it is, given that there’s so much theme material.  It’s quite remarkable the grid is not filled with kludge. I’ll happily accept that our longest fill answers are only a couple of nice 7s: DEEP SEA and GOT MILK? I don’t think I’ve ever seen AXA [Paris-based insurance company] in a grid, but I was able to get past it quick enough.

I did need to make an educated guess at the crossing of HAČEK [Slavic diacritical mark] and CAKE [Savarin or génoise, e.g.]. The cakes in the clue were of no help to me, but I must have seen the word HAČEK at some point. Can any of you orthographically-savvy solvers give us a run-down on the use of the diacritic? 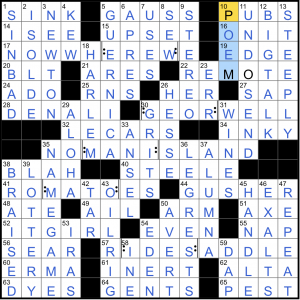 Another benefit of a musical education: being able to spot the theme of today’s grid on sight.

Each of the theme entries has some squares bounded by |: and :| like so:

If you can also read sheet music, you know that those symbols stand for a REPEAT (and if you don’t, 47D spells it out as “What two sets of dots within double lines indicate, in musical scores”).  Treating each set of letters as a repeat, we get the full NOW WHERE WERE WE, GEORGE ORWELL, NO MAN IS AN ISLAND (which appears to be mis-marked in the grid online as I write this), ROMA TOMATOES, and RIDE SIDESADDLE.

Elsewhere: “Round houses?” is a lovely clue for PUBS, don’t you think?

Editor: Mollie Cowger and Erik Agard
Theme: The first part of each theme answer begins with a prefix meaning “half”. 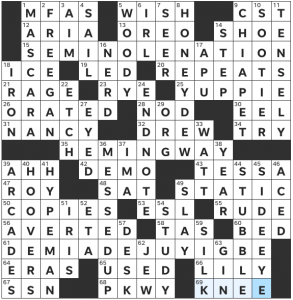 I always love when the USA Today puzzles are perfectly described by their titles, and today is an amazing example of that! I love how malaika chose all words where the letters in the [S|H|D]EMI don’t relate to the “half” meaning at all. I did not know DEMI ADEJUYIGBE until I looked him up, and then I realized I knew him from the podcast “The Gilmore Guys” (I was a huge Gilmore fan but only an occasional listener). He also wrote for “The Good Place” and posts a video of himself dancing to the song “September” every year on September 21, as referenced by the clue – these videos are charity fundraisers, and the 2021 one raised over $800,000 for Imagine Waterworks, the West Fund, and the Sunrise Movement, so that was great to learn about! (Also, my birthday is September 21 so I was excited to see it shouted out). As someone who needed all the crosses in this answer, I think they’re all fair, although I do wish that 52d [Plane stat] for ETA had something to do more specifically with arrivals since I could imagine someone putting “etd” in there by mistake.

Theme: Each theme answer includes a musical artist paired with something that may be offered at a party.

My musical taste is relatively limited, so I required the crosses on all of these except for CARDI B A BACARDI. I’d be curious to see how many others struggled similarly with filling in the first halves of these answers. However, I did really like the fun pairings of items with the artists. TIESTO A TOASTIE and CARDI B A BACARDI in particular are fun to say.

Overall, a fun puzzle. I always learn something new, and the day that I DON’T will be the day I stop doing puzzles (I doubt that’ll happen anytime soon). 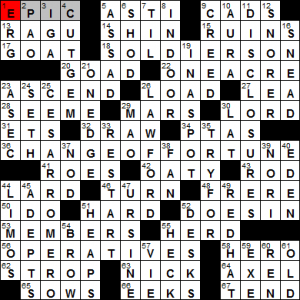 Today’s puzzle by Bruce Venzke features a rare word ladder. The central revealer is CHANGEOFFORTUNE. A GOAT is the “greatest of all time” and he becomes a regular hero? by way of GOAD / LOAD / LORD / LARD / HARD and HERD.

This was chewier that the last few FB themelesses, at least for me, and I got hung up on one crossing that I thought was unfair. Now looking at it again – I’m not so sure. 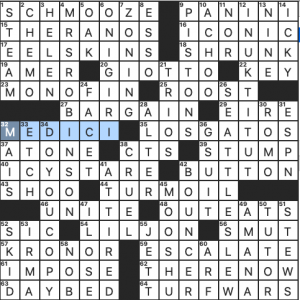 My sticking point was 18a [Gotten smaller]. I entered SHRANK. The A crosses 12d [An official language of the Northwest Territories] which is a First Peoples word that I have never seen before. It’s great to have words like that in crosswords – inclusive and educational! All good! Except….that the vowels are not inferrable, at least not for me, and so I finished the puzzle and didn’t get Mr. Happy Pencil. I finally changed SHRANK to SHRUNK, which is correct. The language is INUKTITUT. I was all set to type out a rant about how 18a could have been either SHRANK or SHRUNK and then I tried the word substitution test. “They’ve gotten smaller” is a perfectly fine sentence. “They’ve shrank” sounds wrong and should be “they’ve shrunk.” So it’s a fair crossing, and I retract the rant that was in my head. In related news “Shrink” is a weird word with a weird past tense. Is there any other word that follows the same pattern? Wait. Now I have this in my head – “stink/stank/stunk.” So yes.

What I didn’t know before I did this puzzle: see above re: EEL SKIN and INUKTITUT. I also did not know that the MEDICIs spawned four popes or that Netflix was headquartered in LOS GATOS.