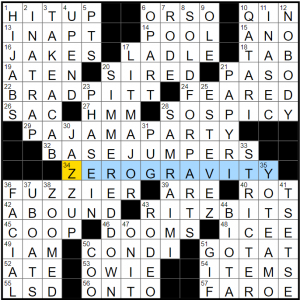 Kind of a Jay-Z vibe here, with three or four apiece of the letters J and Z. HIJABS, PAJAMA PARTY, BASE JUMPERS, JAZZ UP, FUZZIER, ZERO GRAVITY, RITZ BITS… all good.

The HIT UP/UPEND and ON IT/ONTO crossings jumped out at me while solving. IN A TRAP, IN A SEC, PHASE IN …

SO SPICY feels not quite up to the level of crosswordable phrases.

3.8 stars from me. Welcome to the weekend!

Theme: The first words of the theme answers, when spoken aloud, sound like the letters spelling out tricky. 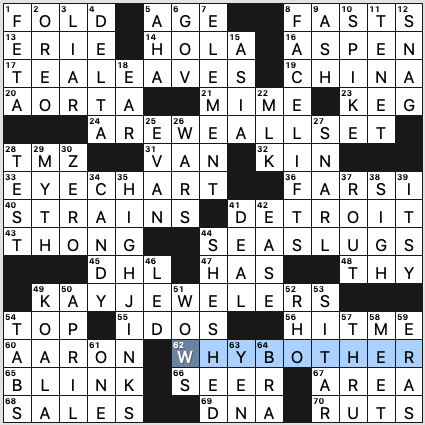 The title doesn’t work for me. It’s meant to be partly literal in that we’re hearing sounds in the theme answers. But the sounds are to the word tricky, not the word complicated. Yes, tricky can be a synonym of “complicated”, but it feels like there’s a step missing. Tricky isn’t actually in the grid anywhere, so why not make the title, “Sounds Tricky”? Granted, “sounds complicated” feels like a more in-the-language phrase than “sounds tricky,” but as a puzzle title, I’d be okay with it.

Other than that, I love the fill: FACELIFTS, HIGHJINKS (though I usually see it as hijinks), EYE CHART (reminiscent of the NYT a few days ago), SEA SLUGS, DETROIT, and SHE SHED. Good stuff. (Is a SHE SHED actually a thing or was it just from that ad campaign from a few years back?)

A nice grid but the title feels off. 3.5 stars.

Theme: The first word of each theme answer spelled out PEANUT BUTTER JELLY TIME, a reference to a meme of a dancing banana singing “Peanut Butter Jelly Time” by The Buckwheat Boyz. 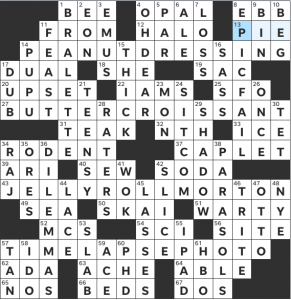 I’m so delighted to be talking about this theme. The revelation of the reference to the song and meme was truly the highlight of my day so far. Plus, with two-grid spanners and two fourteen-letter themers, this was a hefty set of answers to include in the puzzle. Amanda clued these really well, in my opinion, getting just descriptive enough for us to fill.

With four themers, this was a packed grid. I thought that the four eight-letter answers worked into each corner were really fun. BRALETTE (1d [“Undergarment with no underwire”]) kicks off the Downs. EPIC FAIL was another great reference to pop culture, given its popularity as a phrase especially in the early 2000s (Merriam-Webster did a fun history of this phrase, if you’re interested). There was also 36d [“Tough decisions”] DILEMMAS and 38d [“Umbrellas seen in Seurat’s ‘A Sunday Afternoon on the Island of La Grande Jatte”] PARASOLS.

Overall, this puzzle gave me a great burst of energy to get through the work I have to do for today. Have a good weekend! 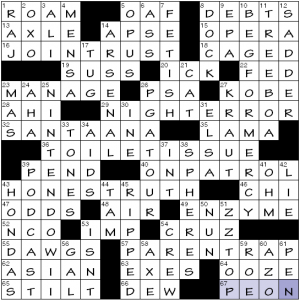 Theme here is phrases with doubled Ts at the end of the first word/beginning of second word, dropping the second T to comedic effect.

These were amusing. Let’s see what else was in the puzzle. 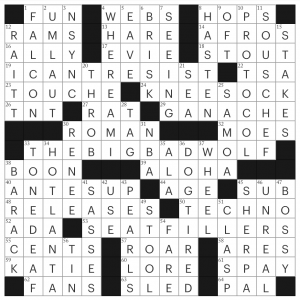 Don’t have time for a write-up today as I have something deeply broken at work and I need to fix it before the end of the day. This puzzle was delightful, my platonic ideal of a themeless puzzle, with the little colonnade of TONE DEAF / HOTLANTA probably being my favorite. My only nit is that I think there’s no reason to gender name clues– the clue for EVIE could very easily just be [Name in “bird’s eye view”]