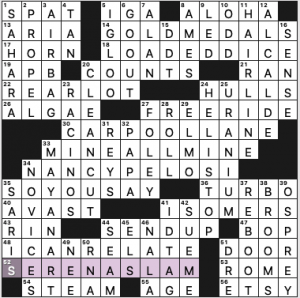 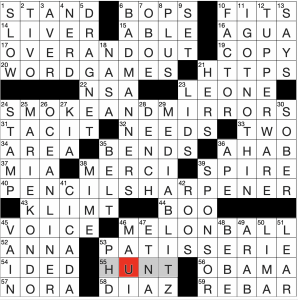 Totally forgot it was themeless day (neglected to read the title before delving in). Uncovered OVER AND OUT and SMOKE AND MIRRORS and thought “Okay, so it’s a _____ & _____ theme.” The other thought I had was “Wow! This fill is incredible for a themed puzzle!” Erm…. Literally completed the entire top half of the puzzle before I realized that fill and a grid like this is a pipe dream for most themed puzzles.

That was my surprise AHA moment of the themeless.

The area I struggled most with was MARIE KONDO (I had MARIA CANDO) and CICADA (I won’t publicly embarrass myself with how I spelled it). KLIMT, or rather the clue for KLIMT [Painter whose name appears backward in “oat milk”] came to my rescue, even if it’s odd that KLIMT is unlikely to have painted any Oat Milk boxes.

Struggled with the (excellent) clue for PLUS [It shares a key with equals]. Had FLAT thinking there was a sharp/FLAT thing. Then I entered CLUB… stay with me… this kinda makes sense. People who are at, say, CLUB Med may be sharing a key (isle) with equals (peers). Right? That works! The actual answer, PLUS, is very clever. Loved all of that, including my mistakes.

Great songs are BOPS?! I had TOPS. Never heard of BOPS in music outside a style of jazz, which is unlikely to be pluralized. 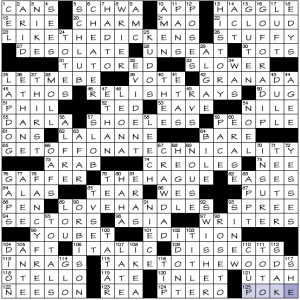 Here we have phrases that can be willfully mis-parsed to be—and in this case are—interpreted as meaning ‘fond of’ their subjects.

Fair enough; I did in fact enjoy these. They are varied enough and often surprising enough. Enough enoughs for you?

Brooke Husic’s USA Today crossword, “Ahead of the Game”—Matthew’s recap 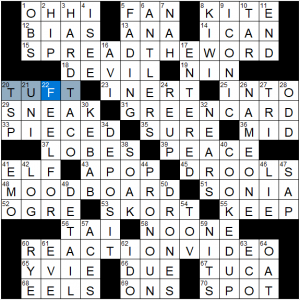 Mollie Cowger joins Erik as a co-editor on this one. The end of each themer is a type of “game”:

SPREAD THE WORD and REACTION VIDEO do not feel like equivalent lengths to my brain, but I guess they are. I really enjoyed this theme set: straightforward and colorful. 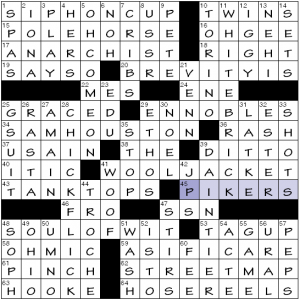 Unlike recent Stumpers, this one yielded itself early on. I got most of the top right section with some gimmes and some confident guesses. Despite not knowing SIPHON CUP [Paint-sprayer reservoir], the SIPHON part was easy to get; ditto the POLE of [Racer closest to the rail] POLE HORSE. Combined with some more downs, the trickily-clued ANARCHIST [Begrudged order-taker] was a lot easier to see.

Then it was on to what turned out to be a mini theme/quote, which I was also able to suss out almost immediately. This gave me toeholds in disparate parts of the grid, always an asset. 20a/38a/48a [Concision catchphrase …] BREVITY IS | THE | SOUL OF WIT. 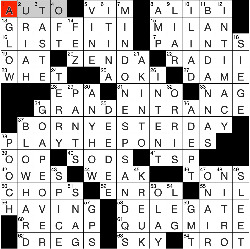 Shame on me: I looked at the byline after I finished the puzzle, thought, “Huh, this name is new to me, wonder if it’s a debut,” checked, and saw that Brian E. Paquin has appeared in LAT quite a few times on Saturday in the last couple of years.

I’d say this grid is okay but not super exciting. The words that got my (positive) attention the most were BLOWHARD and QUAGMIRE (which I dropped in as QUANDARY having only the Q at first; I guess I was 50% right!), but then there was that ONE’S construction with the MIND ONE’S PS AND QS central 15, an awkward clue for BORN YESTERDAY, and GO APE OVER that I was not that into.

I did enjoy the clue [What a hot dog does?] for PANTS; the reference to The Prisoner of ZENDA (great book!); the clue [Getting very close] for INTIMACY.